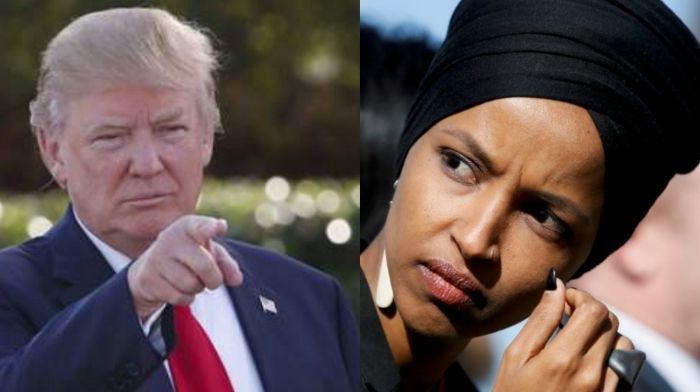 President Donald Trump let loose on Rep. Ilhan Omar (D-Minn) during a rally in Michigan on Friday, claiming that the freshman congresswoman “loves” Yemen but “doesn’t love our country.”

Trump Calls Out Bernie And Biden

While speaking at the rally, Trump was pondering if Senator Bernie Sanders (I-VT) would run for president again when he shifted his attention to Omar.

“I don’t know,” Trump said, pointing out that Sanders “fights like hell” before questioning if he would be a better opponent than “Sleepy Joe” Biden.

“Joe has a bigger base but zero energy, right?” Trump said. “We have a big base and we have more energy than anybody.”

The president then shifted to talking about immigration policy, telling the crowd that Biden wants “a 700% increase in refugees from the most dangerous terrorist spots anywhere in the world including Syria, Somalia, where Omar, Omar — that’s the other reason I’m gonna win, Il-han, Il-han Omar.”

“She loves our country very much,” he added sarcastically. “And Yemen, right? No…she’s going to help me win. She’s going to protest when I go up there. And I’ll say thank you very much. Every time you protest, it’s gotta add about 25% of the vote.”

“She’s telling us how to run our country and she doesn’t love our country,” Trump continued. “The Biden plan will turn Michigan into a refugee camp.”

President Trump: “[Rep. Ilhan Omar’s] telling us how to run our country and she doesn’t love our country, that I can tell you. The Biden plan will turn Michigan into a refugee camp.” pic.twitter.com/SyAxpBu8mg

Trump made similar comments about Omar last month during a rally in Pennsylvania, where he said she was “telling us how to run our country.”

Omar, who was born in Somalia, fired back at Trump on Twitter.

“Firstly, this is my country & I am a member of the House that impeached you,” she wrote. “Secondly, I fled civil war when I was 8. An 8-year-old doesn’t run a country even though you run our country like one.”

You might remember Omar as the woman who last year described the 9/11 terrorist attacks as an event in which “some people did something.”

This piece was written by James Samson on October 30, 2020. It originally appeared in LifeZette and is used by permission.