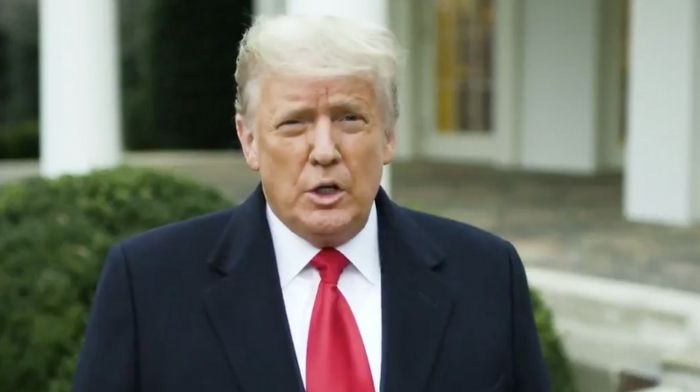 Two Republicans from Ohio have launched an effort to make June 14 “President Donald J. Trump Day” in their state.

State Reps. Reggie Stoltzfus of Paris Twp. and Jon Cross of Kenton are reportedly preparing to introduce a bill in the Ohio House of Representatives to make this holiday, according to the Ohio Capital Journal.

June 14 is both Trump’s birthday and Flag Day. Stoltzfus and Cross said that the bill is meant to show the three million Ohioans that voted for Trump “that we as a legislature recognize the accomplishments of his administration, and that the Ohio House believes it is imperative we set aside a day to celebrate one of the greatest presidents in American history.”

Related: Top Dem Accuses Trump Of ‘Actively Courting A Rise Of The Confederacy’ And ‘Civil War In Our Country’

“(Trump) personified the emotions of millions of Ohioans who for too long have felt marginalized by our government and the American political system,” they added.

“While the media tarnishes his achievements and his legacy, the legislation will help ensure that for one day each year the voices of millions of people from all corners of our state will be commemorated,” they said.

Rep. Jeff Crossman (D-Parma) told The Columbus Dispatch that he felt the date would be “disrespectful.”

“I don’t like the idea of changing an existing federal holiday that honors the flag,” Corssman said.

Washington Post Calls For Trump To Be Denied Presidential Library

This comes after the Washington Post published a piece by “art and architecture critic” Philip Kennicott calling for Trump to not be given a presidential library.

“Trump must never have an official presidential library, and Congress should move quickly to make sure he never will,” Kennicott wrote, adding that Trump cannot be trusted to handle documents relating to his presidency, because he “mixed public and private interests.”

He went on to say that Trump may use his presidential library to brag about his success, which should not be allowed.

“The danger of Trump using a presidential library to burnish his image is far more serious, with the ex-president and his surrogates still promoting the idea that his electoral loss was somehow fraudulent,” Kennicott said.

“That creates an ongoing uncertainty in American public life, which Trump and even more unscrupulous actors will use to further division, inflame tension, exacerbate racism and delegitimize the American democratic system,” he added.

This piece was written by James Samson on January 30, 2021. It originally appeared in LifeZette and is used by permission.