Mr Tushkanov abandoned his plans to drive two hours to the nearest major city and instead stood for an hour in -20C weather in Mikun, a town of about 10,000 in Russia’s gas-rich north, holding a sign that said “BE QUIET OR DIE”.

The next school day, he was abruptly hauled in for a meeting with provincial officials who insulted his mother, accused him of taking bribes from Mr Navalny, and demanded he resign. 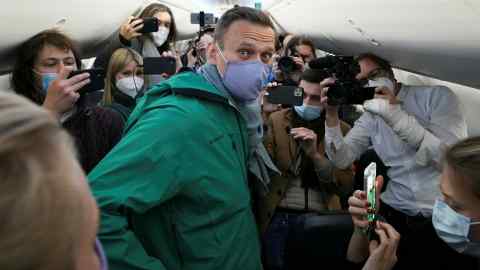 For Mr Tushkanov, 26, the incident embodied the years of pent-up anger at creeping repression and spiralling corruption that led him to protest in the first place.

“How can you teach kids about freedom of speech and the court system in social studies class when there’s all this flagrant lawlessness in the country?” Mr Tushkanov said. “Even if you’re not a Navalny supporter, what happened to him was the last drop. People can’t take it any more.”

Mr Navalny was arrested last week when he returned to Russia from Germany, where he was recuperating from a nerve agent poisoning. He has kept up his fight against president Vladimir Putin from his jail cell. An investigation into an ornate palace on the Black Sea coast allegedly built for Mr Putin has racked up more than 100m views on YouTube, while tens of thousands of people took to the streets in over 120 cities nationwide.

Mr Navalny’s allies say the film and the protests have cemented his status as Mr Putin’s most prominent opponent. But the experiences of people like Mr Tushkanov who protested — often in difficult conditions and far from the gaze of the media — in cities thousands of miles from Moscow may indicate Russians’ concerns run broader and deeper than Mr Navalny’s arrest and poisoning.

“Society wants change, and you can feel it in school. The kids were all born under Putin after 2005, but they can sense something’s wrong. They see the school is pretty rundown — they know that we have [the gas industry] in the town, but even so we don’t really have anything,” Mr Tushkanov said.

Mr Navalny has made concerted efforts in recent years to broaden the base for his anti-corruption activism beyond the liberal middle class of Moscow and St Petersburg, Russia’s wealthiest cities. However, these have previously not been enough to help him break through the barriers erected by state TV, where he is portrayed as a greedy tyrant bent on destroying the country at the US’s behest.

my future’s in this country, I’ve got to live in it, and if I don’t protest, then nothing will change

In polls carried out by the independent Levada Center after his poisoning last year, Mr Navalny’s approval ratings were a mere 20 per cent, while 50 per cent disapproved. As many Russians said his poisoning was either staged or “a provocation by western intelligence”.

Mr Navalny published a letter from jail on Thursday in which he tacitly acknowledged he has yet to translate his online audience into a critical mass of protesters. “If 2 per cent of viewers come to the street, that’ll be enough to bring the regulars at [Putin’s] aqua disco to their senses,” he wrote, referring to an installation at the palace.

Last Saturday, dozens of protests broke out in cities where Mr Navalny’s Anti-Corruption Foundation has no presence, including far-flung locations such as Yakutsk in northeastern Siberia, where a few hundred gathered outside in temperatures of -50C.

The Kremlin is using Mr Navalny’s popularity on social media to paint him as a Pied Piper figure leading underage children to be beaten and tear gassed by riot police, even filing criminal charges to that effect on Thursday against Leonid Volkov, who runs Mr Navalny’s regional network.

Danil Dudko, 18, a musician in Barnaul in western Siberia, said he and other young Russians were as much motivated by a hope for a better life without Mr Putin as by sympathy for Mr Navalny.

“I don’t really get politics, but . . . I realised that my future’s in this country, I’ve got to live in it, and if I don’t protest, then nothing will change,” said Mr Dudko, who had never been to a protest before last Saturday.

The official response to the protests was heavy-handed. OVD-Info, an independent monitor, counted 4,002 arrests of protesters in cities from Pskov on the Polish border to Yuzhno-Sakhalinsk in the Pacific.

In Zachache, a village just south of the Arctic Circle, police detained local environmental activist Elena Kalinina for organising a “mass protest of snowmen” wielding satirical signs calling on Mr Putin to leave office. Unable to charge Ms Kalinina, 44, with a crime, police released her after destroying the snowmen. She resurrected them a few days later with inscriptions such as “I’m doing just fine” and “You can’t kill me.”

Ms Kalinina, a former agriculture executive, said the police reaction showed that “everyone has the same problem: the people have discovered that the country has been impoverished because its resources are held by a narrow circle of people around the president”.

The Kremlin may choose to temper its crackdown in the hope that the protests die out on their own. In Khabarovsk, which saw more than 30,000 people protests weekly last summer against the arrest of the popular local governor, only about 1,500 came to Saturday’s rally — probably a sign of fatigue after the Kremlin left demonstrators alone, but refused to give in to their demands.

Ms Kalinina and Mr Tushkanov, however, both cut their activist teeth during two years of protests against a proposed mega-dump for Moscow’s trash near where they both live in northern Russia. Officials eventually abandoned plans for the landfill late last year.

Mr Tushkanov, who was inundated with so much support from his students and their parents that he was able to keep his job, said small victories like these had helped people “feel strength inside them and in society”.

He added: “Lots of people lived with this attitude that ‘I’ll keep quiet, I’ll sit at home, and nothing will happen to me’. Then it happened to them, they won, and they realised that we can do it.”