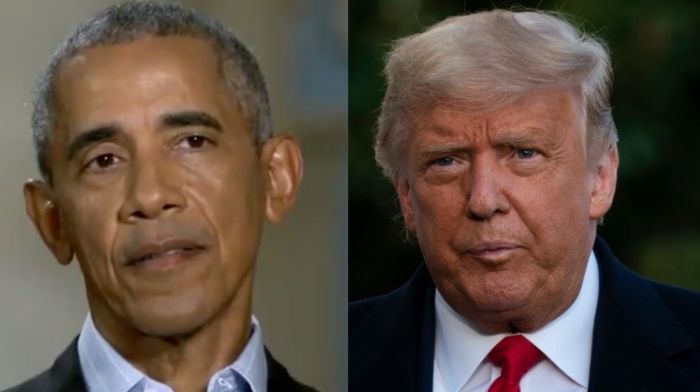 Barack Obama has spoken out to once again attack President Donald Trump, this time claiming that there is “no legal basis” for his claims of widespread voter fraud in the presidential election.

During an interview with CBS host Gayle King that is set to air on Sunday, Obama reflected on the 2016 election.

“When Donald Trump won, I stayed up until 2:30 in the morning and I then called Donald Trump to congratulate him. His margin of victory over Hillary Clinton wasn’t greater than Joe Biden’s margin over him,” Obama said.

The former president went on to claim that Trump supporters who consistently follow the president’s tweets and conservative media will see these voter fraud claims as facts.

“So you’ve got millions of people out there who think, ‘Oh yeah, there must be cheating because the president said so,’” Obama added.

Obama went on to claim that Trump’s refusal to concede the election is dangerous to American democracy, which he said “the peaceful transfer of power — the notion that any of us who attain an elected office, whether it’s dog-catcher or president, are servants of the people.”

This comes after Obama attacked Trump supporters as “racist” in his new memoir “Promised Land.”

“It was as if my very presence in the White House had triggered a deep-seated panic, a sense that the natural order had been disrupted,” Obama wrote. “Which is exactly what Donald Trump understood when he started peddling assertions that I had not been born in the United States and was thus an illegitimate president.

“For millions of Americans spooked by a black man in the White House, he promised an elixir for their racial anxiety,” he added.

Obama is continuing to effectively push the narrative that anyone who didn’t support him as president was “racist” ignoring the fact that maybe some voters just didn’t like his policies.

Given the fact that Democrats spent four years whining that Trump was not a legitimate president, they are the last people who should be complaining about anyone not accepting an election result. They had their time to question election results when they didn’t go their way, and now it’s our turn. Plain and simple.

This piece was written by James Samson on November 14, 2020. It originally appeared in LifeZette and is used by permission.

Read more at LifeZette:
Obama Accuses Sarah Palin Of Making Racism And ‘Anti-Intellectualism’ Popular In GOP
Pelosi Goes Off On Republicans As Trump Refuses To Concede – ‘Stop The Circus And Get To Work’
Chicago’s Liberal Mayor Lori Lightfoot Hit With Backlash For Video Celebrating Return Of ‘Science’ Thanks To Biden