Blackstone founder Stephen Schwarzman defended Donald Trump’s response to this year’s US poll results during an emergency meeting of senior business leaders alarmed by the president’s claims that the election is being stolen, according to several participants.

About 30 chief executives — of companies as large as Goldman Sachs, Johnson & Johnson and Walmart — agreed to the emergency Zoom meeting on the morning of November 6, only hours after Mr Trump said the night before that he had won several states that had voted for Mr Biden.

Jeffrey Sonnenfeld, the Yale management professor who organised the 7am call, declined to comment on Mr Schwarzman’s remarks, but three participants said the Blackstone founder took issue with suggestions made during the meeting that the US could be on the verge of a coup.

Mr Schwarzman, a Republican donor who has been one of Mr Trump’s most energetic supporters on Wall Street, sought to assuage such fears, saying the president was within his rights to challenge election results and predicting that the legal process would take its course.

He asked whether other participants did not find it surprising that early votes in Pennsylvania had favoured Mr Trump, only for later counts to tip the state in Mr Biden’s favour.

Mr Schwarzman said there had been news reports stating that ballots continued arriving days after the election and that some of them may not have been real — issues, he said, that needed to be resolved by the courts, as the president’s legal team has argued.

There was great concern about the president’s words and the national reaction, that it was leading to more cleavage in the country rather than less

Participants in the call said Brian Roberts, Comcast’s Philadelphia-based chief executive, responded by explaining that the state’s Republican-led legislature had prevented mailed-in votes from being counted before election day, and that votes from Philadelphia, one of the later parts of the state to report its tally, had traditionally favoured Democrats.

Asked about Mr Schwarzman’s remarks, Blackstone told the Financial Times: “As an American, Steve believes the electoral system is sound and that the democratic process will play out in an orderly and legal manner, as it has throughout our nation’s history.”

Mr Schwarzman donated $3m to America First Action, a super-political action committee aligned with Mr Trump, in January, but support for down-ballot Republicans accounted for most of the $30m he has contributed to political causes this year.

The CEO call concluded with many of the business leaders resolving to extend congratulations to Mr Biden and encourage Republican congressional leaders to endorse his election victory in the hope of encouraging a smooth transfer of power.

The call was followed by statements from a few individual chief executives and several US industry groups. The Business Roundtable pointedly said it respected the Trump campaign’s right to call for investigations of alleged irregularities but saw “no indication that any of these would change the outcome”.

Prof Sonnenfeld said the anxiety of business leaders had eased since that “shot across the bow” as several of the Trump campaign’s legal challenges to the results had failed. Some CEOs on the call had pushed for the group to reconvene, he said, but “they feel they’ve said enough and it’s getting back on track”. 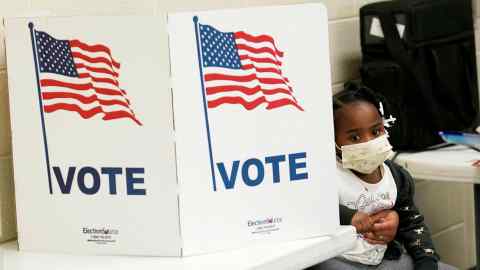 The session on November 6 had opened on a dark note, with a warning about the possibility of a “coup d’état” from Tim Snyder, the Yale historian and author of On Tyranny, who told the business leaders that democracies were almost always overthrown from the inside.

“To defeat a coup d’état, the early response of thought leaders, including of business leaders, is very important. Even if you think what Mr Trump is doing is not going to work, it is very important not to just wait around to see how others respond,” Prof Snyder told the group, according to Prof Sonnenfeld.

“Some thought that was overstating it,” Prof Sonnenfeld told the FT, but he said many CEOs had been “alarmed” by the president’s address and Prof Snyder’s warning left them resolved to speak up.

“There was great concern about the president’s words and the national reaction, that it was leading to more cleavage in the country rather than less. None of them wants a divided nation. They don’t want fractured communities. They don’t want hostile workplaces.”