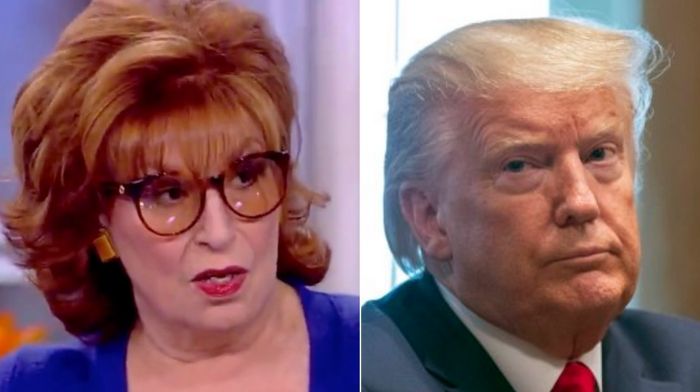 Joy Behar took her Trump derangement syndrome to a whole new level this week when she claimed that the president is “so evil” that he is happy that coronavirus cases are on the rise, because Joe Biden will allegedly have to deal with them as president.

Behar Says Trump Is ‘So Evil’

“It occurs to me that Trump is so evil, at this point, I really think he’s evil,” Behar said on Thursday. “I think he absolutely relishes the idea that things are getting worse and it’s going to be in Biden’s lap. I really think he likes that, that’s how sick he is.”

This came after Behar had dismissed any chance of Trump supporters wearing masks or socially distancing.

The radically liberal Behar added that Trump could just ask his supporters to wear masks to combat COVID-19, but she doesn’t think he’ll do that.

IS A NATIONAL LOCKDOWN NEEDED? The co-hosts weigh in after Dr. Michael Osterholm, a coronavirus advisor to President-elect Joe Biden, said a nationwide lockdown could help bring the pandemic under control in the United States and even revive the economy. https://t.co/0OTDEYyXOE pic.twitter.com/liNqy4fCWG

Behar was one of the most radically anti-Trump people on television throughout his presidency, bashing him on a daily basis.

She has been quick to celebrate Biden’s victory after the media declared him to be the winner, even though President Trump has yet to concede and has pledged to fight this out in court, where he says he’ll be able to prove mass voter fraud.

Last week, Behar shamed millions of Trump supporters, saying that they need to “look in the mirror.”

“A lot of people in this country need to have a come-to-Jesus moment and look in the mirror and see what they did,” Behar said, adding:

“Again, we don’t call people names but look in the mirror and say, ‘Did I vote because of my pocketbook and did I ignore the fact that children are being separated from their parents? Did I vote because I don’t want Black people moving into the suburbs and ignore the fact that Black people are always behind the eight ball in this country and can’t get a leg up because of my vote?’ People need to look in the mirror.”

RELATED: Joy Behar Shames Trump Voters – Says They Need To ‘Look In The Mirror And See What They Did’

If anyone needs to look in the mirror right now, it’s Joy Behar.

This piece was written by James Samson on November 14, 2020. It originally appeared in LifeZette and is used by permission.

Read more at LifeZette:
Obama Accuses Sarah Palin Of Making Racism And ‘Anti-Intellectualism’ Popular In GOP
Pelosi Goes Off On Republicans As Trump Refuses To Concede – ‘Stop The Circus And Get To Work’
Chicago’s Liberal Mayor Lori Lightfoot Hit With Backlash For Video Celebrating Return Of ‘Science’ Thanks To Biden