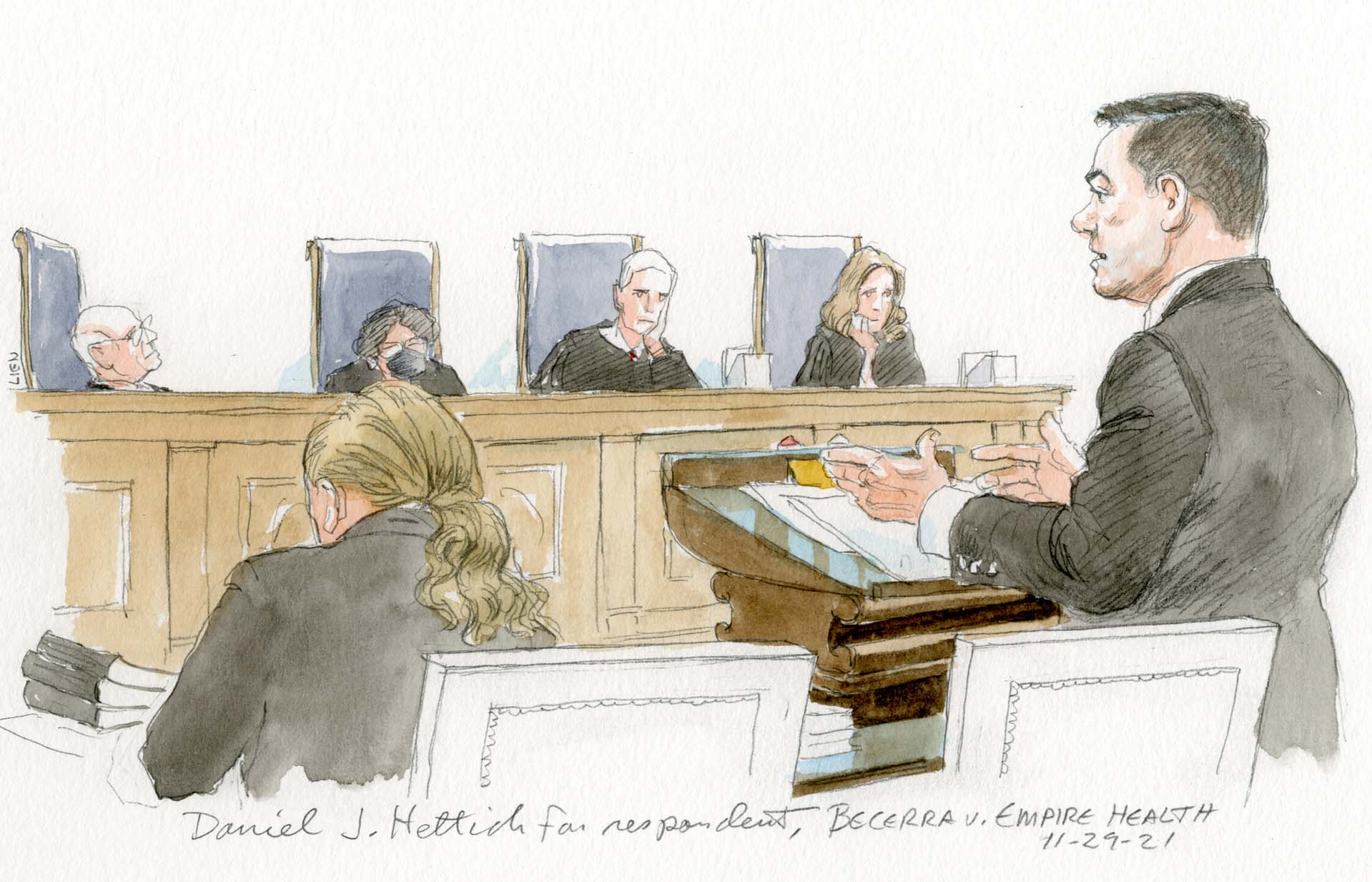 On Monday, the Supreme Court heard oral argument on a Medicare case that will have significant financial consequences for safety-net hospitals and could have implications for the Chevron doctrine, a core principle of administrative law.

At its core, the case, Becerra v. Empire Health Foundation, focusses on whether the Department of Health and Human Services, or HHS, acted lawfully when it expanded the definition of the phrase “entitled to” found in a Medicare payment statute. That statute sets out a formula for special Medicare payments to “disproportionate share hospitals,” or DSH hospitals, which serve a high percentage of low-income patients.

HHS’s prior definition of “entitled to,” set out in a 1997 regulation, only included Medicare patients whose hospital bills were paid by Medicare. In a 2005 regulation, HHS expanded the definition of “entitled to” to include all patients legally entitled to receive Medicare benefits, regardless of whether Medicare actually paid the hospital bills of those patients. The expanded definition altered the existing payment formula, effectively cutting Medicare payments to most DSH hospitals.

Monday’s argument centered on the inscrutability of the Medicare payment statute at issue, HHS’s clumsily enacted 2005 regulation, and what Congress may have intended when it wrote the DSH payment formula. Little was clarified by either side’s arguments.

Both sides presented plausible arguments, but both were also confounded by intractable problems stemming from the statute’s fundamental lack of clarity. This conundrum left the justices struggling to find a solution. Justice Stephen Breyer summed up the court’s position when he said, “I’m baffled!” 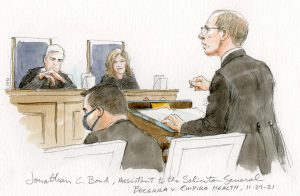 Jonathan Bond, an assistant to the solicitor general, appeared on behalf of HHS. Bond opened his argument by suggesting that other parts of the Medicare Act make clear that “entitled to” in the DSH payment formula should be read expansively to include all patients legally entitled to receive Medicare benefits, regardless of whether Medicare actually paid the hospital bills of those patients. He also argued that the expansive definition of “entitled to” in the 2005 regulation represented the best reading of the DSH payment statute’s text, context, and design, and therefore, at a minimum, the 2005 regulation was entitled to deference under the Chevron doctrine.

All nine justices questioned Bond, focusing on three general areas. One issue was HHS’s inconsistent uses of the phrase “entitled to.” Justice Brett Kavanaugh suggested the agency’s approach generated a “panoply of problems,” including giving two statutory phrases — “entitled to” and eligible for — the same meaning. He also noted that the approach gave the phrase “entitled to” two different meanings in a single sentence. Justices Clarence Thomas, Samuel Alito, Sonia Sotomayor, and Amy Coney Barrett likewise seemed troubled by HHS’s definition of “entitled to.”

Several justices also raised HHS’s bungled rollout process for the 2005 regulation. Sotomayor noted that when promulgating the regulation, HHS misstated its existing DSH payment policy in 2003, corrected the misstatement at the very end of the rulemaking process in 2004, but then, in the 2005 final rule, did the opposite of what the agency initially proposed to do. Kavanaugh noted, “We’ve whacked agency rules for much less than that.” Using the bungled regulation rollout as a launch point, Sotomayor zeroed in on the Chevron issue. “Given the odd flip-flopping in the administrative process,” she noted, “I don’t see how we give you Chevron deference under those circumstances.” Alito expressed similar concerns.

Several of the justices raised the issue of HHS’s repeated mishandling of Congress’ directives to implement the DSH payment formula. Chief Justice John Roberts, recounting that Congress appears to have been extremely frustrated with how HHS has designed the DSH payment scheme over time, remarked, “It strikes me as a situation where I think we ought to be particularly precise in interpreting the language Congress used without any gloss added by the agency.”

Finally, noting the complexity of the statue, the inconsistent interpretations, and the lack of clarity in the regulatory process, Breyer seemed to express the sentiments of many justices when he asked Bond, “How are we supposed to decide who’s right?”

Daniel Hettich, appearing on behalf of Empire Health Foundation, raised three arguments. First, he argued that HHS repeatedly violated Congress’ instructions for reimbursing DSH hospitals and therefore the agency should not be afforded any deference in its interpretation of the phrase “entitled to.” Second, he complained that HHS’s approach violates basic rules of statutory interpterion by giving two different phases — “entitled to” and “eligible for” — the same meaning while simultaneously interpreting “entitled to” to mean two different things in a single sentence. Finally, Hettich suggested that HHS’s interpretation violates Congress’ instructions by reducing payments to DSH hospitals.

Roberts, Thomas, and Justice Elena Kagan all retuned to the issue of trying to square HHS’s definition of “entitled to” with the rest of the Medicare Act. Turning the tables on Empire Health, the justices noted that if they were to interpret “entitled to” as suggested by Empire Health, the DSH payment provision would be internally consistent, but would not square with the rest of the Medicare Act. In other words, regardless of which side the court chooses, statutory inconsistencies will remain.

Alito raised the possibility that Congress may never have had any intent on the issue before the court. He asked Hettich, “Do you really think that a majority of the Senate and a majority of the House thought through the particular question that faces us in this case and they all said, yes, your interpretation is the right interpretation, that’s what we want?”

Kagan suggested to Mr. Hettich that, given the complexities of the case, HHS’s theory supporting its interpretation might offer the best path forward. While noting that “there are good arguments on both sides about what this formula means,” to the extent that the answer “doesn’t leap off the page,” one “attractive” aspect of HHS’s position is that its theory is more “simple and straightforward” than Empire Health’s theory. HHS’s interpretation of “entitled to” neatly divides senior citizens and non-senior citizens in the payment formula, which may have been Congress’ intent.

Breyer again framed the case as an intractable conundrum. He noted that under an ordinary-meaning approach, HHS’s position may be better, but that the Chevron doctrine may not apply because the terms are so mixed up and nobody — including perhaps HHS — understands what they mean. He then exclaimed, “I’m stuck. … What do I do?”

At times, the justices appeared to be more sympathetic to Empire Health’s arguments, but they also appeared unable to move past the inconsistencies in the Medicare statute. What’s clear, however, is that the winner of this case will not be the party with the best argument, but the one with the least-worst argument. The dispute is complex, the statute is not clear, Congress’ intent is not well-defined, HHS has changed its position multiple times, and the agency’s rulemaking process was — at best — confusing. HHS’s position, if adopted, will leave a statutory provision with multiple internal contradictions. Empire Health’s position doesn’t seem to make things better. It eliminates one set of statutory contradictions but creates others.

The court’s decision may ultimately boil down to a point made by Kagan. Perhaps the best way to resolve this dispute is to focus on what Congress seemed to want when it set up the DSH payment formula — dividing senior citizens and non-senior citizens into two separate groups. This approach would favor HHS’s position, which would, of course, lower payments to DSH hospitals — a result that Congress may not have intended.