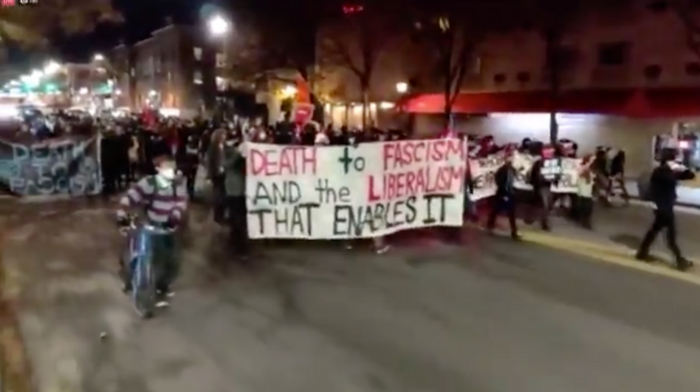 A woman spat in an officer’s face after screaming, “F*** you, fascist” in NYC.

A young woman was arrested after she spat in an officer’s face after screaming, “F–k you, fascist,” tonight in the West Village. pic.twitter.com/cfgVLYJ5pc

The chaos wasn’t limited to the Big Apple. Far from it.

Radical, anti-American protesters marched in Denver, Colorado, apparently calling for the dissolution of the United States.

“No borders, no walls, no USA at all,” chants a crowd in Denver, CO
pic.twitter.com/arUUEHfyRX

In what has become a nightly performance, violent rioters went on a rampage in Portland, Oregon.

In Chicago, protesters demanded that election officials “count every vote.”

Heard quite a bit about planned protest activity tonight…

They were coming out everywhere.

A wide range of demonstrators gathered on Wednesday night in Portland, Ore., Philadelphia, Chicago and New York to show support for all votes to be counted, Black Lives Matter and other causes. pic.twitter.com/vArauma5Lw

WHAT Do These People Want?

Now for the big question: WHY?

Protests and outright riots have been going on for months on end following the death of George Floyds. Those, I understand.

But why are people destroying Portland for the 200th time?

Some of the protests, like the one in Chicago, appear to have a coherent message – they’re anti-Trump.

But again, anyone watching the mainstream media is under the impression that Biden has this thing in the bag.

The mainstream media is pushing Joe Biden across the finish line to 270 electoral votes and ignoring Team Trump’s points about the numbers possibly still being in the President’s favor.

Fox news even called Arizona for Biden while CNN and other outlets have not!

Regardless, 2020 Democratic nominee Biden is firmly in the driver’s seat.

There Is No Appeasing These People

So why are people rioting? Are these election protests?

The answer is clear to me: These people were going to create violence even if there was no George Floyd, police brutality, or Donald Trump.

The young “antifa” woke left’s goal is to cause chaos in the name of some fantasy socialist utopia they dreamed up in their freshmen poli-sci class.

Take another look at the banner they were carrying in Denver.

“Death to fascism and the liberalism that enables it.”

These people aren’t talking about “liberals,” like you and I would describe American Democrat voters.

They mean liberalism in the classic sense – the Enlightenment philosophy enshrined in our Constitution.

Freedom of speech, association, to bear arms, of religion, etc. That’s the liberalism they are talking about.

That’s what they want to destroy.

That the Democrat might beat the Republican in the presidential race means little to these people – putting them in the minority on the left compared to overall Democrat voters.

And yet they have so much sway on the left given the spectacle their horrible actions cause.

So that is why they riot. For themselves. For the sake of being the selfish radical ideologues they are.

How people vote will not affect their actions. So what do you even do with that?

Answer: You don’t. There is no appeasing these monsters.