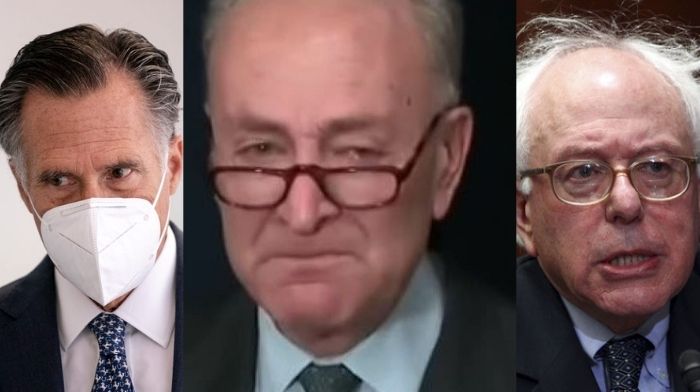 I’ve thought for a very long time that many of our Republican leaders are, in fact, covert agents of the left.

They should all be audited. Think John McCain and Willard Romney!

Unfortunately, the old saying holds; They are all crooks except mine.

Our Founders tried to protect us from the tyranny of the majority. The US Constitution requires a Republic, with layers of representation between the “majority” and the levers of power.

Those layers have eroded over the years (17th Amendment, for example), to our detriment.

They’re Not Afraid Of Losing Their Jobs!

Politicians have no fear of their voters, which is why they do what they do.

Look around; another old saying is; We don’t elect our politicians; we sentence them to life.

If you win your elections by 2 or 3 to 1 and have done so for 30 years, why would you not think you are free to do as you please?

The generational breakdown of the 117th Congress, beautifully visualized by @kerning pic.twitter.com/LyaR5BYT5R

Bernie Sanders and Joe Biden are not products of today; they have been in office for decades. Government is all they know.

The only thing that will save our country is for a few of these people to be recalled EVERY QUARTER. But, as oppressed as many of these states have become, they can’t get the 1.5 million signatures even to have a recall.

Taking to the streets won’t do it; removing a few of them will.

Republicans themselves are greatly responsible for disheartening conservatives. For the most part, they over-promise and under-deliver when in office.

I am not speaking of Pres. Trump, of course, but for the most part, Republicans are simply placeholders until the next Democratic Party lurch further to the left.

When Will They Ever Be Held Accountable?

How many times have we seen Dems and the deep state commit treasonous crimes and just walk away?

Hillary Clinton had her illegal server. She obstructed justice by having data eradicated; she perjured herself by lying about it. She mishandled classified material. Barack Obama also used the server and lied about it.

James Clapper and John Brennan lied while under oath, and on camera, about serious national matters.

FBI’s finest, Andrew McCabe, James Comey, and Peter Strzok, are guilty of sedition, based on everything I’ve seen.

All this while General Flynn is financially ruined, has his reputation destroyed, and loses four years of his life as he is put through hell and treated like a criminal.

How can we trust the US “justice” system?

There is no justice system.

The left’s greatest mistake will be the real threat that we will lose everything simply by government action. We are still in a situation where we might win.

We tried voting, and there are still the courts. That is the last of our legal remedies.

Should those fail, then we will have nothing to lose that would not be taken anyway.

The left has been smart. Their street thugs are mostly useless people with no more value in life than their ability to cause havoc.

They lose nothing by losing because they are already losers. They are expendable pawns in the left’s game, and they have created an unlimited supply.

They have protected them from legal liability, monetary loss, and pain.

Our potential street warriors are different. They have lives of value and people for which they care.

The left has let us retain just enough that the risk of losing it is just too high. They show no remorse for the malicious prosecution of the least offense.

They will bleed us to bankruptcy if we dare oppose them. They beat us and throw things at us or shoot us and laugh while the police turn their backs.

You don’t get to call people racists, Nazi’s and Russian bots for 4 years and then ask for “unity.” Sorry, but life doesn’t work that way. https://t.co/NfISnd9Z0t

However, we have reached the point that they are one step away from total power. This is the point where they begin to take the crumbs they had let us keep, to stop us from revolting.

With a complete and total victory, there will be nothing left for us to lose. We will be free not to be nice anymore. They really do not want that, but they think they do.

The person that has lost everything and has nothing more to lose is very dangerous. There will be no reason to wait. Patience will have ended.

We must save ourselves from the party of demons. Their corruption always rises to higher levels, and we are always surprised!

Wake up, brothers and sisters. The uniparty has a plan, and our so-called Republican representatives don’t have the stomach to stop it.