The US has approved the Pfizer/BioNTech Covid-19 vaccine on an emergency basis, with the first shots set to be shipped within 24 hours.

The Food and Drug Administration announced on Friday night it was granting an emergency use authorisation for the inoculation, which will be offered to healthcare providers and people in care homes first. It said there was “clear evidence” that the vaccine may be effective in preventing Covid-19.

Stephen Hahn, the FDA commissioner, said in a statement: “The FDA’s authorisation for emergency use of the first Covid-19 vaccine is a significant milestone in battling this devastating pandemic that has affected so many families in the United States and around the world.”

Donald Trump, the outgoing US president, said in a videotaped statement: “Our nation has achieved a medical miracle. We have delivered a safe and effective vaccine in just nine months.”

The president said doses had already started to be shipped, and that he expected the first person to be vaccinated within 24 hours — though his health secretary Alex Azar earlier said it was likely to happen on Monday.

The decision makes the US the sixth country in the world to authorise the vaccine, following similar action by the UK, Canada, Bahrain, Saudi Arabia and Mexico.

The process in the US has been particularly politically fraught, however, with Mr Trump frequently criticising the FDA for moving too slowly.

On Friday morning Mr Trump tweeted that the regulator was a “big, old slow turtle”, while Mark Meadows, his chief of staff, had separately urged Dr Hahn to hurry up. Dr Hahn called reports that Mr Meadows had threatened his job as an “untrue representation” of their conversation.

Critics had accused the outgoing president of trying to push through an approval before last month’s presidential election.

Speaking to the Financial Times, Ugur Sahin, BioNTech’s chief executive, said it was “extremely exciting” to watch as countries prepare to roll out the vaccine.

“Most of the time you focus on what comes next . . . maybe next summer, we can relax and try to recapitulate what has happened,” he said.

Albert Bourla, Pfizer’s chief executive, said the company had “worked tirelessly” and been “steadfast in our belief that science will win”. “As a US company, today’s news brings great pride and tremendous joy that Pfizer has risen to the challenge to develop a vaccine that has the potential to help bring an end to this devastating pandemic,” he said.

The FDA’s decision came after a group of outside experts met to discuss the trial data. Some 17 experts voted in favour of the motion that the benefits of the Pfizer/BioNTech vaccine outweighed its risks for use in individuals 16 years of age and older. Four voted against, while one abstained.

Dr Sahin added that he liked the “transparency” of the FDA’s approach. “Every society has its own way to deal with such an important topic,” he said.

The emergency use authorisation is not a full approval, which may come in a matter of months. However, it will allow for widespread distribution. 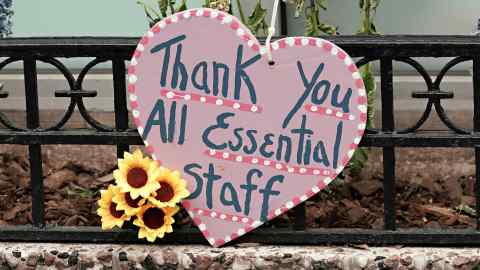 Members of the vaccine advisory group raised concerns about whether there was enough evidence to support allowing 16 and 17 year olds and pregnant women to get the vaccine under an emergency use authorisation.

But the EUA allows these people to have the vaccine, although pregnant women are advised to discuss it with their healthcare provider.

The vaccine is based on messenger ribonucleic acid, or mRNA, technology, a novel approach that uses a genetic code, developed by BioNTech. Pfizer agreed a deal with the German company back in March to run trials and commercialise the product, and the pair will split costs and profits 50/50.

The US government paid almost $2bn to pre-order 100m doses — enough for 50m people — in July, shortly before the phase 3 trial began. But since other countries snapped up supplies during the autumn, the US may have to wait until next summer for more doses.

The US does have pre-orders for several other vaccines, including the Moderna jab, which could be approved as soon as next week.