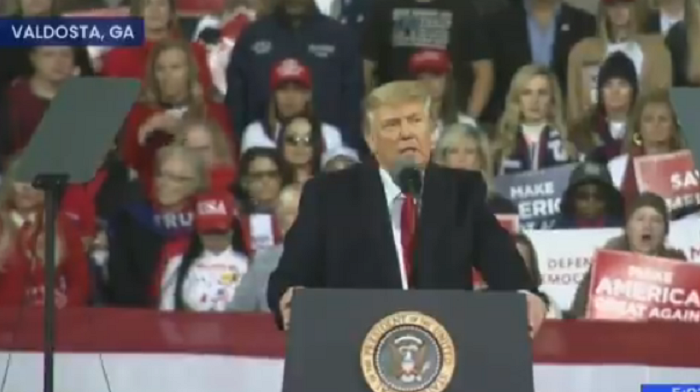 President Trump, speaking at a rally in Valdosta, Georgia over the weekend, urged Republican voters to show up and vote in the Senate runoffs, claiming the “socialists and communists” could win.

Republicans maintaining control has been deemed crucial in keeping a Biden administration in check.

“There’s never been a case where a state has had this prominence on Senate races. Never together, and this is something that’s very important and you have to get out and you have to vote,” Trump pleaded.

“If you don’t vote, the socialists and the communists win.”

President @realDonaldTrump: “If you don’t vote. The socialists and the communists win.” pic.twitter.com/VLhaX0iKKa

RELATED: A Call To Arms: Georgia Is Ground Zero For The Future Of The Country – We Must Win

Recent polls have shown tight races in the Georgia runoffs, and Republicans need at least one of the candidates – Loeffler or Perdue – to win and allow the Senate to serve as a check to one of the more extremists administrations this nation has ever seen.

The Trafalgar Group shows Perdue trailing in his race by one percentage point, while Loeffler leads Warnock by five points.

Warnock, a Democrat candidate, has come under fire of late for his comments that those who serve in the military can’t be true to their religion.

He said of Wright’s anti-American speech after 9/11 that it was simply a form of “truth-telling” and that the “social transformation that’s been the hallmark of Rev. Jeremiah Wright’s ministry” is “why we are happy to honor” him.

Jon Ossoff, the other Democrat candidate, is no less radical or dangerous.

Ossoff welcomed the endorsement of Senator Bernie Sanders, and praised the Senator’s “advocacy” for health care, which includes eliminating all private health insurance.

He also attempted to hide his connection to a Chinese Communist government from the public, has received thousands of dollars from Qatar’s state media company Al Jazeera as well as a Chinese state-backed media company.

Fox News highlights how “Jon Ossoff has financial ties to the Chinese Communist Government and tried to hide the connection in his public disclosure form.”

The Stakes Couldn’t Be Higher

President Trump further emphasized to Georgia voters just how important these Senate races are for the future of America.

“Very simply, you will decide whether your children will grow up in a socialist country or a free country,” he insisted.

“Socialism is just the beginning for these people. They want to go into a communistic form of government,” the President added.

“If you don’t vote, the socialists and the communists win,” Trump said. “They win. Georgia patriots must show up and vote for these two incredible people. They are two of the finest people you will ever meet.”

“Every single Republican who cares about the future of this country, and who cares about protecting the incredible work done by President Trump over the last four years, should be laser-focused on winning both of these Senate seats,” he added.

Republicans voting is the only way to combat the Democrats – both their legal votes and their illegal efforts.

Officials have warned that there are “vast numbers” of Democrats inquiring about moving to Georgia with the sole purpose of voting in the Senate runoffs – a felony.

“You must go vote, vote early,” Trump said. “They cheated, they rigged our presidential election, but we will still win it. They’re going to try and rig this election too.”