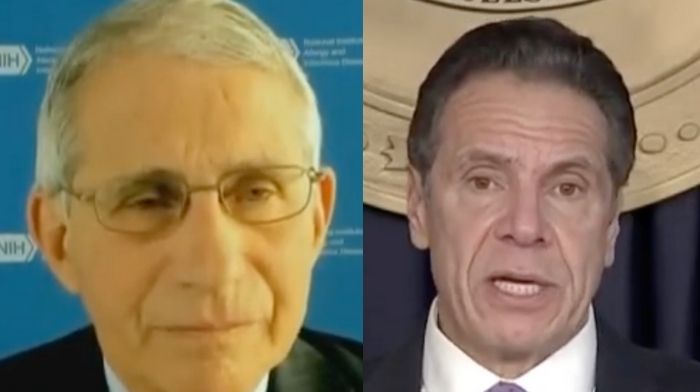 New York Gov. Andrew Cuomo (D) is being roasted on social media after he claimed that he and Dr. Anthony Fauci are like the “modern-day” versions of The Godfather actors Robert De Niro and Al Pacino. It didn’t take long for this to blow up in Cuomo’s face, however, as social media users had a field day mocking him for this ridiculous comparison.

Cuomo and Fauci were discussing the United States’ ongoing response to COVID-19 during a press conference on Monday when the governor compared them to the renowned Italian American actors.

“Doctor, on the question of this state’s infection rate versus other states, we’re lower than all states besides Vermont, Maine, and Hawaii. Does that surprise you, and how do you explain that?” Cuomo asked, referring to New York.

Fauci responded by heaping praise on Cuomo for the way he’s handled coronavirus in his state, ignoring the many mistakes that he’s made along the way.

“I have to say, being a New Yorker, Governor, it doesn’t surprise me,” he said. “You guys, as you and I have discussed on many phone calls that we’ve had, you got hit with a sucker-punch right from the beginning, when the cases came in from Europe, the Northeastern corridor — particularly New York state, particularly the metropolitan — got hit really, really badly.”

“You recovered from that, was after you got hit badly, your baseline level went way, way, way down and very, very low, and then you did things which were the appropriate way to avoid getting re-surging [cases],” Fauci added. “So, the bad news, and it’s painful for me to see it from a distance to my place of birth, but you guys really got slammed.”

Not stopping there, Fauci continued to praise Cuomo, failing to mention the governor’s infamous order to place COVID-positive patients in nursing homes earlier this year, resulting in countless deaths.

Cuomo appeared to love this massive stroking of his ego from the infectious disease expert.

“I think you have tremendous credibility, not just across the country, but across this state,” he said. “And I think your voice on saying that vaccines are safe would be important. I said that as soon as the vaccine is deemed ready and safe, I’ll be the first one to take a vaccine. Maybe we enlist you, I’ll do it with you. We’ll do an ad telling New Yorkers it’s safe to take the vaccine, to put us together.”

Social media users, however, were not having any of it:

This makes sense because at the ends of their movies usually everyone is dead. https://t.co/toSqnDB56w

Gov. Cuomo enjoys the pandemic like no one else. https://t.co/5bFgURrOgs

is Cuomo basing his own personal comparison on the total number of people dead at the hands of Pacino and De Niro’s characters in their respective movies combined https://t.co/kEf9z5HwRO

Really? His modesty is overwhelming. https://t.co/QCYs0ssrmQ

All Cuomo has shown with his handling of this pandemic is that he is an incompetent leader who has an ego for days. he showed that once again with this ridiculous press conference.

This piece was written by James Samson on December 8, 2020. It originally appeared in LifeZette and is used by permission.

Read more at LifeZette:
Michigan Home Of ‘Big Trump Supporter’ Is Bombed – Police Investigating
Mike Flynn Says He ‘Put The Fear Of God’ Into Obama
Gretchen Whitmer Hit With Brutal Blow As Restaurants Team Up To Fight Back Against Her Restrictions