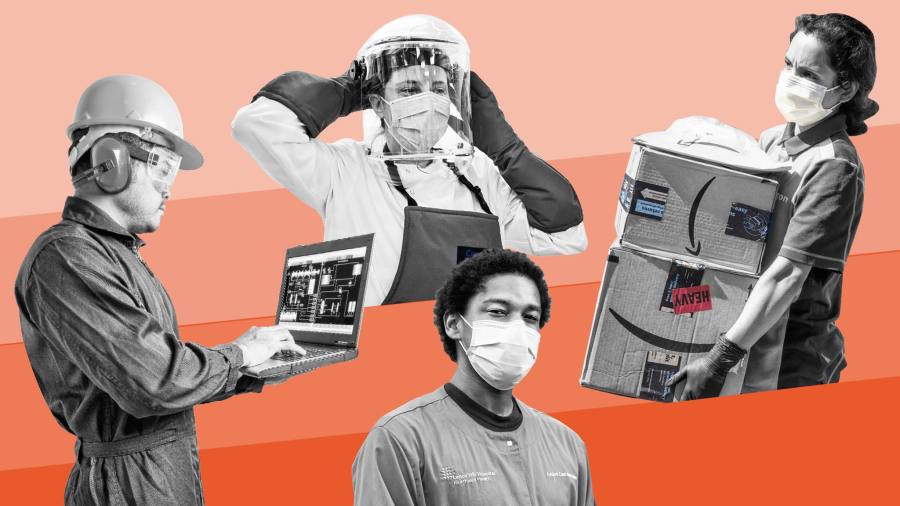 At the end of last month, a British recruiter named Phil McDiarmid received what should have been a simple client request: could his company, Create IT, find four telecoms riggers to climb up some mobile phone masts to upgrade the antennas?

The workers were needed in England, where the collapse of the Debenhams and Arcadia retail groups had just put 25,000 jobs at risk and a restaurant that advertised for a receptionist in July got 963 applications in a day.

Yet rigging teams are in demand as phone companies roll out 5G services across the country, and by the start of last week, Mr McDiarmid had not had a single response to adverts he placed offering up to £650 a day for a team of two workers.

“I spoke to someone today who quoted £750, which is steep, but these lads know we’re all squeaking,” he told the FT. “My client may say yes to that because he needs them.”

Welcome to the deeply uneven 2020 jobs market, where Covid-19 has battered high streets, hotels and airlines but left other sectors unscathed or thriving.

Globally, the pandemic’s impact on workers has been “catastrophic”, says the International Labour Organization. The UN agency estimates the equivalent of 345m full-time jobs were lost between July and September alone and the new year outlook is bleak in many countries.

Yet employers are racing to fill some types of jobs as the virus upsets traditional employment patterns at a rate that has been striking even for experts with decades of hiring experience.

“The last nine months have shown businesses that they can transform and digitise at a pace and scale they never previously thought possible,” says Jonas Prising, chief executive of the ManpowerGroup employment agency. “This has led to an overnight shift in the skills employers are looking for.”

US retail stores are a classic example of the phenomenon. Mr Prising says they have been hiring during holidays as usual, “just not in the roles we would typically expect”. Instead of recruiting more people to work on cash registers or the sales floor, they are taking on drivers, warehouse workers and supply chain experts to handle a boom in online deliveries.

Demand is by no means uniform. In the UK, ManpowerGroup data shows drivers are the most keenly sought employees, followed by construction workers. But in France, it is salespeople followed by soldiers and in Spain it is different again: healthcare and social services jobs rank first, ahead of sales and marketing roles.

For some jobs, timing is key. In the US, demand for one type of worker leapt by nearly 600 per cent in October from the previous month, the LinkedIn jobs site found. Who were they? Tax specialists. There was a scramble to hire them as taxpayers rushed to meet an October 15 filing extension deadline.

Broadly speaking, recruiters agree the pandemic is driving demand hardest for workers who do one of three things: transform businesses digitally (as a data analyst or app developer can); move stuff (like a driver or warehouse worker) or help people, as nurses and doctors do.

The need for medical workers is unlikely to fade any time soon. One jobs site used by organisations in the UK’s NHS listed nearly 18,000 adverts last week.

Top 10 roles in increasing and decreasing demand across industries

Demand for some health roles is so strong it has forced recruiters to take special measures. Nick Kirk, UK managing director of the Michael Page employment agency, says the pandemic has powered the market for in-store supermarket pharmacists who are so busy during the day that headhunters struggle to reach them in normal working hours.

“You don’t get hold of a pharmacist until after 7 o’clock at night,” he says. “So we’ve had to have a team that comes online later in the day or starts early to capture them because they won’t speak to you throughout the working day.”

The story is similar for demand planners: people who forecast future demand for products so a supply chain is ready to deliver them. The need for them has spiralled as companies have ramped up deliveries in the pandemic. Mr Kirk says such jobs pay up to around £50,000 a year and a colleague in one of his agency’s Yorkshire offices had just told him she could place someone in that role “five times over” at the moment.

In the case of tech jobs, Covid has accelerated existing demand as it pushes everything from shopping to office work and classrooms online.

The need to keep networks safe from cybercriminals is a case in point. It was estimated before the pandemic that 3.5m cyber security jobs would be unfilled globally by 2021, up from 1m in 2014.

The current figure is unknown but it is definitely “in the millions”, says retired US Army Major General, John Davis, a vice-president at the Palo Alto Networks security company.

In the early, most uncertain stages of the pandemic, the company reined in its normally high pace of hiring. But he said it soon became obvious that Covid was prompting a boom in opportunities for cyber crime. “As a result of that, the need for cyber security in this new normal that we’re living in has also exploded,” he said.

Cybersecurity expertise is just one type of digital skills gap that companies have raced to fill this year.

As the pandemic advanced, some organisations were able to execute 18-month digital transformation plans over a weekend, the Accenture consultancy said in a report this month.

But only 14 per cent of companies were “digitally mature” enough to do this, meaning they already had the digital tools, training and leadership required.

In Germany last week it emerged that the Daimler auto group, a relative latecomer to the electric car market, plans to hire thousands of software coders to build a digital operating system to rival Tesla’s.

On the face of it, that sounds like good news for a coder in a technology epicentre such as Silicon Valley.

But as with so much else in 2020, conventional wisdom is shifting. The Michael Page agency’s Mr Kirk says the “supercharging effect of Covid” has complicated the hiring picture as employers have seen how much work can be done outside the office.

Last week he spoke to a contact at a European-based organisation that was seeking to hire hundreds of technology workers.

He says he was told: “Look, they can work anywhere in the world. I just want the best people available. And if they aren’t in this country where our big shiny head office is, no problem.”