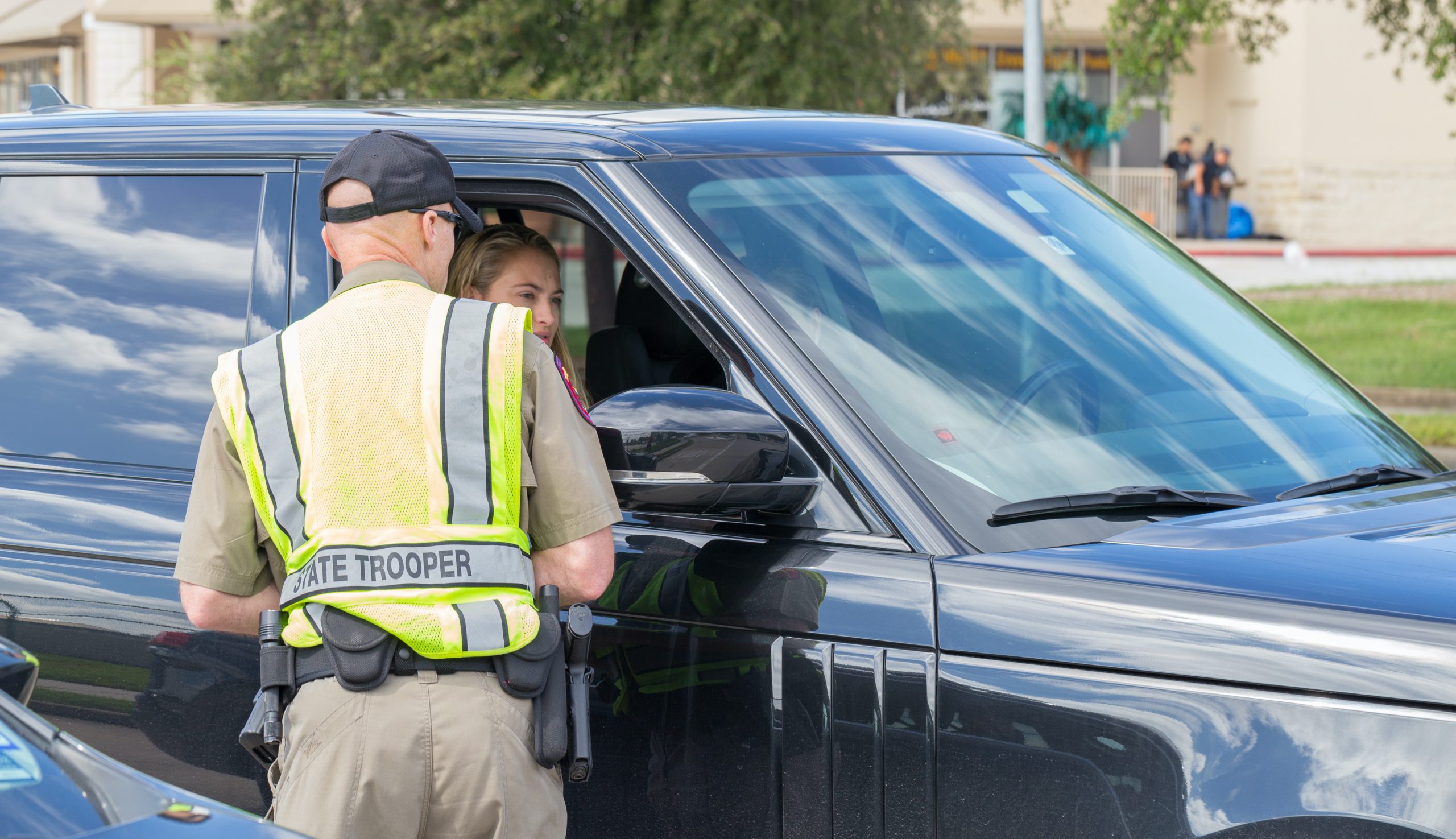 A Texas state trooper speaks with the occupants of an SUV. On Tuesday, the court will hear a case from a former state trooper who wants to be rehired after his military service. (Michelmond via Shutterstock)

In Torres v. Texas Department of Public Safety, to be argued on Tuesday, the Supreme Court will decide whether a private individual can sue his state-agency employer for violating the federal Uniformed Services Employment and Reemployment Rights Act of 1994.

Among other provisions, USERRA requires both state and private employers to rehire former employees back into the same position after they have completed military service. If the employee incurs a disability during military service that renders him or her unable to perform the duties of the prior position, the employer must instead place that person in a position “that provides a similar status and pay” to the original position. USERRA allows individuals to sue non-compliant employers in either state or federal court.

Le Roy Torres served as both a Texas state trooper and a U.S. Army reservist. In November 2007, he was called to active duty and deployed to Iraq. While deployed, he suffered lung damage from burn pits – the infamous waste disposal method used by the U.S. military that produced toxic fumes and long-term health damage for many veterans – and was honorably discharged. Because his lung damage prevented him from performing all of his duties as a state trooper, Torres requested that the Texas Department of Public Safety reemploy him in a different position. The department ultimately refused to do so, and Torres sued in Texas state court under USERRA.

The department responded by arguing that, as a state agency, it was immune from suit. Although the state trial court rejected that argument, a divided Texas court of appeals reversed, holding that the department was protected from suit by the federal constitutional doctrine of state sovereign immunity. The Texas supreme court declined to hear the case.

State sovereign immunity has a checkered history. The original Constitution says nothing about whether states are immune from suit, but it does confer jurisdiction on the federal courts to hear suits “between a State and Citizens of another State.” In 1793, in Chisholm v. Georgia, the Supreme Court relied on this language to allow a suit against Georgia by an out-of-state creditor. (The Georgia House responded by passing a bill providing that anyone seeking to enforce Chisholm would be “guilty of a felony and shall suffer death, without benefit of clergy, by being hanged.”)

Chisholm was, not surprisingly, unpopular with the states. In 1795, they ratified the 11th Amendment, which provides that “[t]he Judicial power of the United States shall not be construed to extend to any suit in law or equity, commenced or prosecuted against one of the United States by Citizens of another State.”

Despite the apparently narrow language of the amendment – limited to suits in federal court brought by non-citizens of the state – the court held in 1890 in Hans v. Louisiana that it precluded all suits against a state (or its agencies) in federal court, including suits brought by state citizens to enforce federal constitutional provisions. More than a hundred years later, in Alden v. Maine in 1999, the court extended sovereign immunity to suits brought in state court. The Alden court also explained that state sovereign immunity is not derived solely from the text of the 11th Amendment, but rather from “fundamental postulates” and “the Founders’ understanding” of constitutional structure.

The court has erected a complex and elaborate jurisprudential structure governing Congress’ authority to remove, or abrogate, states’ immunity from suit. In 1976, it held that Congress could abrogate immunity by acting under Section 5 of the 14th Amendment, which gives Congress power to enforce that amendment. But in 1996, it held that Congress could not abrogate immunity using its Article I power to regulate interstate commerce. In both Alden and the 1996 case, Seminole Tribe of Florida v. Florida, the court suggested – in what many regard as dicta – that Congress could not use anyof its Article I powers to abrogate state sovereign immunity.

This distinction between 14th Amendment powers and Article I powers has led to some rather odd conclusions. For example, the federal Family and Medical Leave Act requires employers – including state employers – to provide unpaid time off for employees who are caring for a new child or an ill family member, and also for employees to attend to their own medical needs. The court held that the caregiving provisions were validly enacted under Section 5 because they addressed prior discrimination against women as primary caregivers, and thus abrogated state sovereign immunity. But a few years later the court held that the “self-care” provisions were not within Congress’ Section 5 powers because they were not designed to remedy discrimination. While valid against private employers based on Congress’ Article I power to regulate commerce, those provisions could not abrogate state sovereign immunity.

More recently, the court has stepped back from its blanket statements about the relationship between Article I and state sovereign immunity. And it is that recent turnabout that is at the heart of this case.

In 2006, in Central Virginia Community College v. Katz, the court held that states had no immunity from bankruptcy claims in federal court. And in 2021 in PennEast Pipeline Co. v. New Jersey, the court held that the state could not claim sovereign immunity as a defense to condemnation proceedings brought by a private party to whom Congress had delegated federal eminent domain authority. In both cases, the court held that the states had necessarily ceded their immunity “in the plan of the Convention” – in other words, in “the structure of the original Constitution itself.” It was the states’ ratification of the Constitution, rather than the relevant act of Congress, that abrogated the states’ immunity from bankruptcy and eminent domain suits.

Torres, and the United States as amicus curiae, argue that the states did so. They begin with the Constitution itself, stressing that not only does it assign the power to raise and support armies – along with other concomitants of the power to wage war – to the federal government, it specifically divests states of most power over war and the military, explicitly prohibiting states from keeping troops or ships, waging war, or entering into treaties with foreign powers. The reason is clear: During the Revolution, the new nation’s dependence on states for money and manpower almost crippled the war effort (the famously difficult winter at Valley Forge was caused as much by a lack of money as it was by the weather). As the federal government’s brief explains, citing Alexander Hamilton in The Federalist No. 22, “[t]he Constitution expressly conferred on Congress – and withheld from the States – the powers to raise and support Armies and to provide and maintain a Navy precisely because ‘obstructions’ from the States had very nearly cost the Nation its independence.” Congress’ bankruptcy and eminent domain powers are shared with the states; that the war powers are almost exclusively assigned to the federal government makes it even more clear that the structure of the Constitution abrogates states’ sovereign immunity when it comes to statutes enacted under the war powers.

Torres and the United States also cite contemporaneous statements by both proponents and opponents of the Constitution in support of this reading. The briefs are replete with quotations to the effect that the grant of almost exclusive power over war to the federal government “sacrifice[d]” state sovereignty and was (in opponents’ words) “subversive of the state governments.”

Finally, the briefs point to a long history of Congress enacting, and the Supreme Court approving, incursions into state sovereignty using the war powers. These include laws tolling state statutes of limitations during wartime, expanding habeas corpus and related procedures to ensure that state officials and state courts did not interfere with federal military policy, and, in one instance, establishing an entire provisional court system in Louisiana, administered by federal military officers.

For its part, Texas relies on distinguishing Katz and PennEast. Both cases, the state argues, reflect “unique contexts that demand judicial administration of specific property,” unlike generic employment discrimination suits. And, unlike the legislation enacted immediately after ratification subjecting the states to bankruptcy suits, “[t]he U.S. Army existed for nearly two centuries before Congress first purported to authorize damage suits against state employers” in the military context. Thus, “Congress’s power to make war does not imply the power to authorize private lawsuits.” The state’s brief also notes that there is no specific “war power,” but rather a “collection of specific powers,” which are “subject to separate conditions [and were] debated separately.” Canvassing the debates over each of the specific powers, the state finds no evidence that the Framers contemplated suits against non-consenting states. Finally, the state argues that whatever else Congress can do, it cannot abrogate a state’s immunity in state courts.

Much of modern state sovereign immunity jurisprudence, like the briefs on both sides in this case, contains extensive historical analysis. In Alden, both the majority and the dissent engaged in long discussions of the original understanding of the Constitution, and whether and how it changed with the adoption of the 11th Amendment. Similarly, Katz and PennEast include detailed histories of English and early American law on bankruptcy or eminent domain. We should expect the justices to engage with counsel about their reading of history: Did the Founders believe that, by ratifying Article I’s conveyance to Congress of various powers over war and the military, states ceded their sovereign immunity “in the plan of the Convention”?

Justice William Brennan once called sovereign immunity doctrine a “crazy-quilt pattern.” Perhaps this case will help make the doctrine less crazy – or perhaps it will just add another piece to the quilt.