Long before Donald Trump sounded the alarm about election fraud and urged his supporters to “go into the polls and watch very carefully”, Catherine Engelbrecht, a mother and small business owner living on the outskirts of Houston, Texas, was already standing guard.

For more than a decade, Ms Engelbrecht, a Tea Party activist, has been one of the right’s leading drill sergeants in a war against voter fraud — a scourge that experts say barely exists.

The organisation Ms Engelbrecht founded in 2009, True The Vote, has, by her estimate, mobilised thousands of like-minded citizens across the country to monitor the polls and challenge voters they believe are ineligible.

For this election, True the Vote has rolled out an app that allows citizens to report suspected voter fraud from their smartphones as well as a Continue to Serve initiative to enlist military veterans as poll watchers.

The stakes, Ms Engelbrecht believes, have never been higher. “These are revolutionary Marxists that are attempting to destroy our elections, and in so doing, destroy our country,” she explained in a recent episode of her Red White and True podcast.

The 2020 election is shaping up to be like no other in our nation’s history. There is significant concern that we may see voter intimidation efforts

Casting ballots by mail, she argued, was not a way to avoid crowded polling places in the midst of a pandemic but a plot by the Left to sow electoral confusion that would eventually result in Nancy Pelosi, the House majority leader and Trump bogeywoman, seizing power. “It’s not just about mail voting,” Ms Engelbrecht said. “It is part of a much broader plan.”

That sort of apocalyptic rhetoric is stirring fears of pandemonium at polling places on election day that has been unfamiliar in the history of the world’s leading democracy.

It is not unusual for partisans to claim fraud in the run-up to election day to motivate their supporters. But this hyper-charged election season is different, say experts.

For the first time, a sitting president has predicted voter fraud on a grand scale and exhorted his supporters to guard the polls. This will also be the first national election since a decades-long ban was lifted on what the Republican party calls “ballot security” initiatives.

The Republican party has responded by announcing plans to try to recruit 50,000 poll watchers in 15 states. In Pennsylvania, one of the most hotly contested swing states, it is suing for permission to allow people to serve as poll watchers outside the county where they are registered to vote, prompting worries about hostile outsiders descending on inner-city polling places.

Meanwhile, militia and paramilitary groups such as the Three Percenters and Proud Boys are making menacing noises on social media about the need to protect polling places.

“The 2020 election is shaping up to be like no other in our nation’s history. There is significant concern that we may see voter intimidation efforts and protests, some possibly violent, in the days leading up to November 3,” the Conference of Mayors warned in a recent statement. 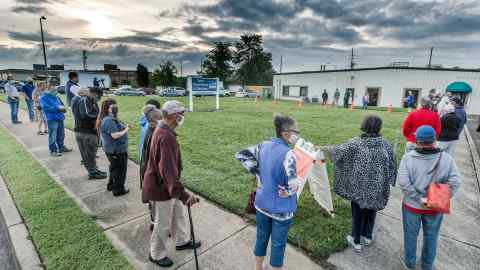 Michigan, where the FBI recently foiled a militia plot to kidnap the Democratic governor, has responded by announcing new restrictions on firearms near polling places. In cities such as Houston and Philadelphia, law enforcement and prosecutors are readying plans to handle election day disturbances.

“One of our biggest concerns that we have in the civil rights communities is the possible acts of violence in blue areas of red states for intimidation — more of a hodgepodge, not necessarily co-ordinated,” said Maria Teresa Kumar, chief executive of the Voto Latino Foundation. “That is what we’re watching out for.”

Ms Englebrecht did not dismiss such suggestions, predicting “civil unrest” would follow a chaotic election. “What I want more than anything is a seamless process and a peaceful exchange of power,” she said in an interview with the FT. “But that doesn’t look like where we’re headed.”

Even if November 3 proves uneventful — as many suspect it will — the heated rhetoric of groups such as True the Vote might yet serve a purpose, according to Gerald Hebert, senior director of voting rights at the Campaign Legal Center, by dissuading some people from voting.

“I think that rhetoric is largely just that. And it’s intended to chill people,” said Mr Hebert, a 20-year justice department veteran. He calls True the Vote “an extremist group.”

While the rules vary, most US states allow citizens to serve as observers inside polling places on election day. They can report inconsistencies and challenge the eligibility of fellow citizens to vote.

Typically, however, the practice is tightly regulated. Poll watchers must usually be registered with a particular party or candidate and certified well before election day. In Texas, for example, each party is limited to two poll watchers at a polling place at any given time, and they are forbidden from talking to voters.

“I could not decide on election day to roll up to a polling place and declare myself a poll watcher. In the vast majority of states, there is a process that one must go through, and there is a limit to the number of people who can go through that process,” said Eliza Sweren-Becker, a counsellor at the Brennan Center for Justice at New York University Law School.

But those rules do not cover areas outside of polling places, where militias and other self-declared patriots and poll watchers may congregate. Doing so would follow in a long and racially tinged tradition of intimidating voters under the auspices of guarding against voter fraud. Academics — and some Republican election lawyers — say such fraud is vanishingly rare.

In the early 1960s, for example, the Republican party’s Operation Eagle Eye sent volunteers to inner-city and predominantly minority neighbourhoods where, in some cases, they administered literacy tests to challenge voters’ eligibility. Among its ranks was the late William Rehnquist, who went on to become chief justice of the Supreme Court.

In 1981, the party hired armed, off-duty police to patrol inner-city polling places in New Jersey wearing armbands that identified them as members of the National Ballot Security Task Force. Its abuses prompted a consent decree that restricted the party’s election activities and was only lifted by a court in 2018.

Still, groups found ways to use seemingly legitimate poll watching to try to intimidate voters, according to Mr Riley. One tactic is to file challenges against voters when they arrive at the polling place if only to “gum up the works”.

“Sometimes they’re just making these challenges willy-nilly,” he said. “Even if most of them are rejected, is it enough to cause chaos in the polling place? Is it enough to increase the length of a line simply by making it take longer for people to vote?”

Ms Engelbrecht rejects the idea that voter fraud is not a serious problem, even if it has proved difficult to establish. A task force created by President Trump to substantiate claims of widespread voter fraud in the 2016 election, claims that were first aired by a True the Vote member, wrapped up without issuing a report.

“Pointing out voter fraud is a lot like harvesting fog: You can see it — but picking it up is hard to do,” Ms Engelbrecht said. In any case, she argued: “You don’t need a lot of fraud to swing an election.”

Like other Tea Partyers, Ms Engelbrecht claimed to “loathe politics”. Her family owns a machining business that serves the oil and gas industry. They live on a farm.

But Ms Engelbrecht was awakened by the 2008 election of Barack Obama, and a palpable feeling, as she put it, that “everywhere you turned, government was spreading”. She founded a Tea Party chapter called the King Street Patriots. The next year, during local elections, King Street members decided to volunteer as poll workers. What they saw, Ms Engelbrecht said, were shocking numbers of irregularities. True the Vote was soon born.

It gained national attention after Ms Engelbrecht applied to register the group as a charity and she and her family business were audited by the IRS. The revenue service was later found to be overly zealous in its scrutiny of Tea Party groups. Ms Engelbrecht testified before Congress about experiencing “a kind of trickle-down tyranny that is actively endorsed by the [Obama] administration.” She became a darling of Fox News and Conservative groups such as the Heritage Foundation.

Since then, True the Vote has trained volunteers to serve as poll watchers and election workers. It has also pushed for tougher voter ID laws, and filed lawsuits against counties that it deems negligent in cleaning their voter rolls.

A report published by the Pew Trust in 2012, that is often cited by ballot security activists, found that 1.8m dead people were on active voter rolls, and 12m flawed addresses. By law, those rolls should be cleaned — or “purged”, depending on one’s political affiliation — to prevent possible abuse.

Dead wood that has accumulated on voter rolls does not equate to fraud, say voting rights activists. The process of cleaning the rolls, they claim, often results in many legitimate voters being mistakenly removed and disenfranchised.

“I think what they’re mostly doing is breeding a sense of distrust,” said Nicole Pedersen, a lawyer for the Democratic Party in Harris County, which includes Houston. “They’re looking for something that doesn’t exist.”

Until the pandemic arrived, Ms Englebrecht said she was not terribly concerned about mail ballots. “Then in mid-March, the script was flipped,” she explained.

Her chief complaint is that Democratic governors have run roughshod over legislatures to extend deadlines for mail ballots, expand the use of drop boxes and other reforms that she believes their states are not equipped to manage.

“It feels very intentional,” she said. “It feels as though the pandemic was seized upon.”

It is an argument she sets out at length in a 28-minute YouTube video modestly titled, ‘The Most Important Video of the 2020 Election’.

Come election day, Ms Engelbrecht plans to be in a war room, responding to calls from her volunteers across the country, and readying for a contentious — possibly violent — election day.

As she told listeners recently on the Phyllis Schlafly Eagles podcast: “We have to be real with ourselves. This is a clear and present danger on home soil. And we have to stop it.”