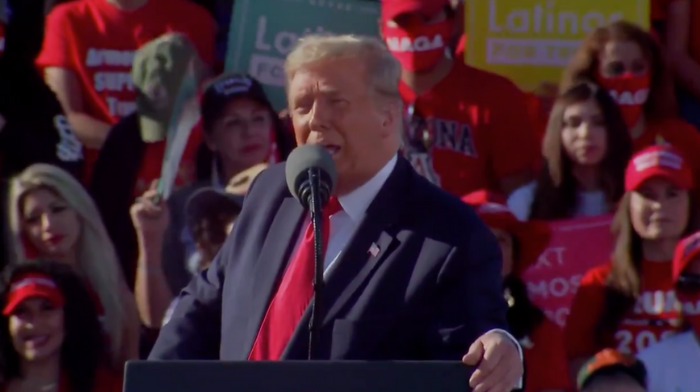 During an Arizona campaign rally on Wednesday, Donald Trump mocked the revelation of the identity of the infamous “Anonymous” anti-Trump op-ed author for the New York Times.

The anti-Trump author, said at the time to have been a top Trump administration official, wrote the scathing piece, “I Am Part of the Resistance Inside the Trump Administration.”

The anonymous author vowed, “I work for the president but like-minded colleagues and I have vowed to thwart parts of his agenda and his worst inclinations.”

The author was revealed to be, not a top official, but former Department of Homeland Security staffer Miles Taylor.

Perhaps shocking to no one, Taylor is now a CNN contributor.

When Trump heard the news, he told rally-goers Taylor is a “nobody” and a “disgruntled employee.”

Trump On Taylor: ‘A Low-Level Staffer, A Sleaze Bag, Who’s Never Worked In The White House’

“Turned out to be a low-level staffer, a sleaze bag, who’s never worked in the White House,” Trump told a cheering crowd.

On Wednesday, Miles Taylor revealed he was the anonymous administration official who wrote the “resistance” op-ed.

“You know where he works now? He works at CNN, can you believe it?” Trump mocked.

Miles Taylor says that if President Trump gets a second term, he will “feel completely emboldened” to pursue “Nazi-like immigration policies.”pic.twitter.com/6cEpDA2Q2v

Trump: ‘This Guy, In My Opinion, Should Be Prosecuted’

President Trump then had some fun.

He joked that the op-ed author might have been someone actually important, maybe an “anonymous” high-level source like adviser Hope Hicks, son-in-law Jared Kushner, or even allies like Senators Mike Lee or Rand Paul.

“The whole thing was just one more giant hoax from the Washington swamp and a corrupt special interest group,” Trump said.

“This guy, in my opinion, should be prosecuted,” Trump said, for working against his White House.

Many thousands of people work for our government. With that said, a former DISGRUNTLED EMPLOYEE named Miles Taylor, who I do not know (never heard of him), said he left & is on the open arms Fake News circuit. Said to be a real “stiff”. They will take anyone against us!

After coming clean about his identity, Taylor promptly went on CNN, where he made outrageous claims about President Trump.

Taylor claimed Trump will be emboldened to pursue “almost Nazi-like immigration policies” if elected to a second term:

Miles Taylor says that if President Trump gets a second term, he will “feel completely emboldened” to pursue “Nazi-like immigration policies.”pic.twitter.com/6cEpDA2Q2v

At the rally, Trump supporters chanted, “Drain the Swamp!”

“The left-wing media and the swamp are doing everything in their power to try to stop us,” Trump said.

“And by the way, we’re here and they’re not and their heads are exploding,” the President added.

Miles Taylor coming forward less than a week before the election was no coincidence.

How much it will matter on November 3rd is questionable at best, but time – and votes – will tell.