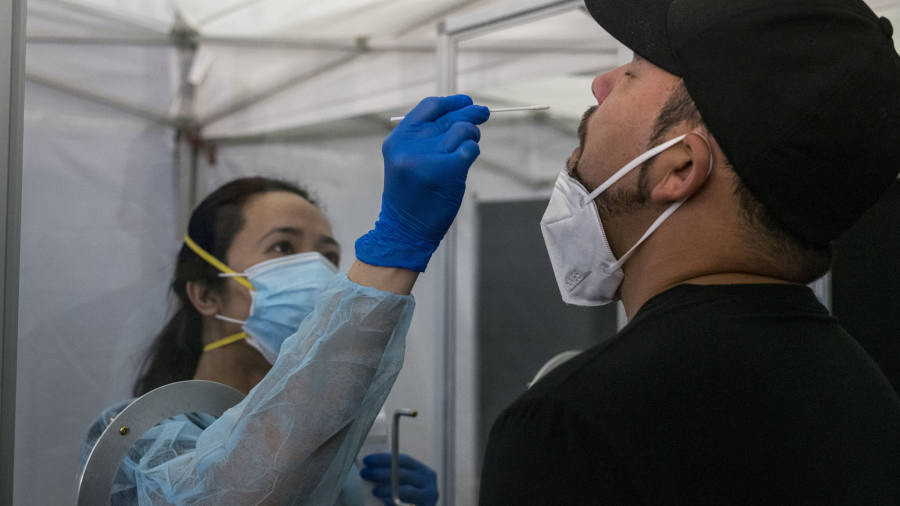 The US reported its third-biggest one-day jump in coronavirus cases, and more than 1,000 deaths, on Wednesday.

Adding to the worrying figures, a record number of states now have higher levels of patients hospitalised with coronavirus compared than four weeks ago.

A further 78,661 people tested positive, according to Covid Tracking Project data, up from 73,096 on Tuesday and compared with 60,712 on Wednesday last week.

That is the third-biggest one-day jump in cases since the start of the pandemic, ranking behind 83,057 last Friday and 82,925 the day after.

The US has tallied 518,670 cases over the past week, a record for a seven-day period, or an average of about 74,100 a day, which is the highest rate of the pandemic.

Nearly all states have experienced a rise in cases over recent weeks. As of Wednesday, 49 states and the District of Columbia had a seven-day average higher than seven days ago, according to FT analysis of Covid Tracking Project data, a proportion previously seen in early April. Louisiana, was the lone holdout.

Illinois reported the biggest single-day jump in cases among states, with 6,110 new infections that marked its second-biggest daily load of the pandemic. Texas (5,627 new and historical cases) and California (4,515) posted the next-largest jumps.

Kansas (3,369 but catching up for two days of data), Iowa (1,781) and South Dakota (1,270) were the three states to report record single-day increases, according to FT analysis of Covid Tracking Project data.

On Wednesday, 22 states had seven-day averages of cases that were at a record level, the highest proportion since mid-July, when Covid-19 was spreading quickly through sunbelt states.

Authorities attributed a further 1,025 deaths to coronavirus, up from 931 on Tuesday and compared with 1,024 last Wednesday. It was the third time so far in October the country has tallied more than 1,000 deaths in a single day.

Texas (105), California (75) and Florida (66) had the biggest one-day rises in fatalities, while Nebraska (17) was the only state to report a record jump.
The number of people currently in US hospitals with coronavirus climbed to 45,045 from 44,212 on Tuesday, the highest level since mid-August.

On Wednesday, 47 states and the District of Columbia, had a higher level of hospitalisations than four weeks ago, the highest proportion of the pandemic, according to FT analysis of Covid Tracking Project data.