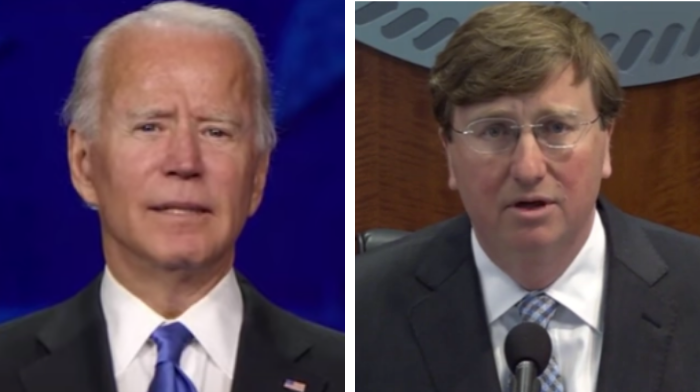 On Thursday, Mississippi Governor Tate Reeves signaled that he would not comply with any mandatory national lockdown if Joe Biden wins the election and tries to implement one.

Reeves said during a coronavirus update, “We’re not going to participate in a nation-wide lockdown,” adding that such an idea was “totally and completely beyond reasonableness.”

Gov. Reeves: ‘We Will Certainly Fight That If Necessary’

Reeves worried about the economic damage another lockdown would do.

“That’s not the way the economy works,” he said.

The governor noted that Biden does not have the constitutional authority to force states to shutdown, adding, “We will certainly fight that if necessary.”

Reeves is right about the unconstitutionality of such an act. Even NPR has fact checked the idea of a nationally mandated lockdown and found it to be “likely not legal.”

Osterholm told MSNBC’s Morning Joe, “In the first week of August, Neel Kashkari, the president of the Minneapolis Federal Reserve Bank, and I wrote an op-ed piece in The New York Times that basically said we need to, in a sense, lock down to drive this infection level to a place where we can actually control it with testing and tracing and follow-up that way, just like the Asian countries have done.”

“And I’m talking about everything from Australia to New Zealand, all the way right up through China, Japan,” Osterholm added. “All of those countries have done it already.”

“Really, to deal with the pain and suffering economically is what we basically proposed was because the savings rate in this country has gone out of the roof, since the pandemic.” he continued.

The doctor continued to insist the economics could work out in the event of a shutdown.

“We need to lock down to drive this infection level to a place where we can actually control it.” pic.twitter.com/MOoKyQUylf

“We have gone from 8% to over 22%,” the doctor said. “We can borrow the money from ourselves at historically low interest rates.”

He also thinks the government can – and should – dole out even more money.

“We can pay people to lose their job,” Osterholm insisted. “We can pay small business. We can take care of city, state and county governments if we’re elected to do that.”

“If Washington could get together and make that happen,” he finished. “That would be a very different kind of lockdown where people wouldn’t suffer, and we can get this virus under control.”

That’s a lot of wishful thinking – that Mississippi won’t experiment with.