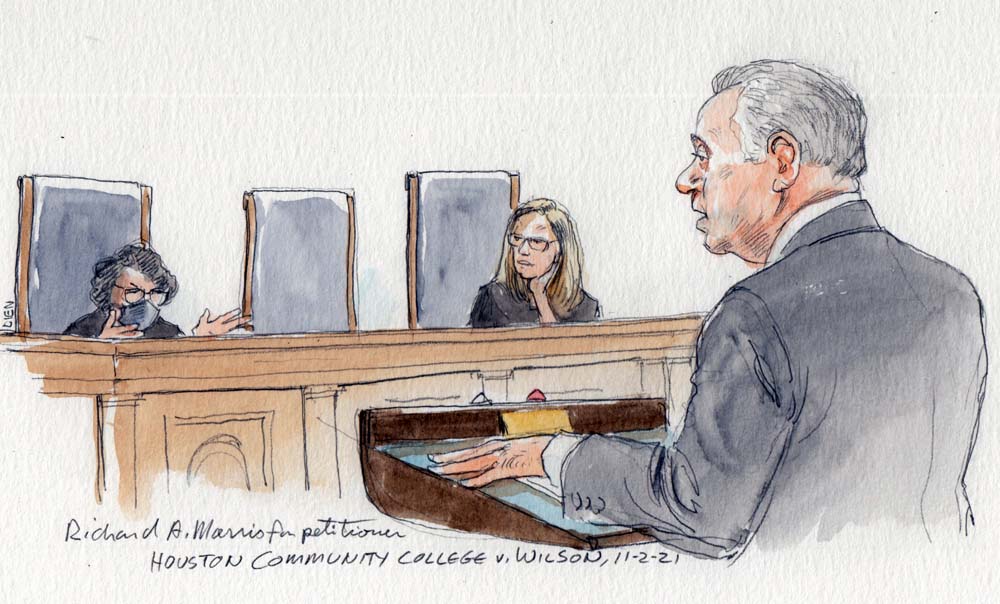 The internecine battle between David Wilson, one of nine trustees on the board of the Houston Community College System, and the rest of the board has all the makings of a long-running Netflix series – Dallas meets Community, perhaps. There are allegations of greed and corruption, culminating in one trustee’s conviction on federal bribery charges. There are private investigators, as well as two separate lawsuits filed by Wilson against the board and his fellow trustees.

But beyond a reference to the board’s “extremely checkered history,” there was little discussion of this drama at Tuesday’s oral argument in Houston Community College System v. Wilson. Instead, the justices focused on an important constitutional question: Did the First Amendment limit the board’s authority to censure Wilson for his constant criticism of what he describes as the board’s “pay to play” culture? After nearly 90 minutes of oral argument on Tuesday morning, a majority of the justices appeared to agree with the community college that it did not.

Arguing for the college, lawyer Richard Morris told the justices that the First Amendment’s free speech clause “unquestionably protects a member’s right to criticize the body on which they sit, but it does not insulate the member from the elected body’s speech in response.” Wilson, Morris contended, “basically concedes” that the board had a right to respond to his violations of the board’s rules. His only objection, Morris said, was to the board’s description of its response as a censure or punishment. “But the free speech clause doesn’t dictate what words an elected body can use to reprimand one of its members,” Morris asserted.

A majority of the justices seemed to share Morris’ views, with two justices – Justices Samuel Alito and Sonia Sotomayor – at the opposite ends of the ideological spectrum suggesting that the case was “easy.” The justices raised concerns, however, about the broader implications of their ruling. Sotomayor and Justice Clarence Thomas, for example, both pressed Morris about the limits of an elected body’s power to sanction its members for their speech – does the body have the power to expel or imprison its members?

Chief Justice John Roberts also wondered how far that power would extend, both in terms of the nature of the body and the speech at issue. He asked Morris whether the U.S. Patent Trial and Appeal Board, whose members are appointed rather than elected, could censure a member who decided not to stand for the national anthem at a baseball game.

Thomas later returned to the question, asking Morris whether a legislature could sanction a private citizen. Morris suggested that it could, but he added that it “would be a fairly extraordinary circumstance.” Moreover, he continued, if the legislature “overstepped, they’d probably pay the price at the ballot box.”

The justices returned several times to the question of whether they could or should consider other restrictions imposed by the Houston Community College board in conjunction with its censure – for example, prohibiting Wilson from holding an officer position on the board and making him ineligible for travel reimbursements. The U.S. Court of Appeals for the 5th Circuit agreed with the college that these restrictions did not violate the First Amendment, and Wilson did not file a petition seeking review of that determination in the Supreme Court, but Wilson contended that the additional restrictions make clear that the censure was “plainly punitive,” rather than merely an expression of disapproval.

Arguing for the United States as a “friend of the court” supporting the college, Assistant to the Solicitor General Sopan Joshi told the justices that even if they did consider them, the additional restrictions are analogous to the kind of power that elected bodies have long exercised in response to a member’s speech, without any suggestion that the elected bodies were violating the First Amendment. 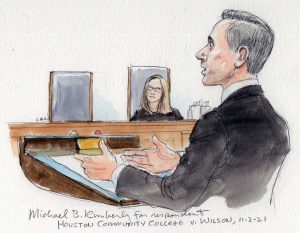 The justices had an entirely different set of concerns when Michael Kimberly came to the lectern to argue on behalf of Wilson. Kimberly told the justices that the rule proposed by the college and the government would create “really terrible line-drawing questions.” By contrast, he said, he was offering a “clean and administrable rule”: When an elected body formally invokes its disciplinary power, identifies a rule or code at issue, determines that a member’s speech has violated that rule and imposes sanctions (such as a censure), only then is the First Amendment violated.

But it quickly became clear that the justices thought that Kimberly was drawing too fine a line. Roberts called the distinctions on which Kimberly relied “artificial.” Under your rule, he said to Kimberly, the board could adopt a resolution identical to the one that it adopted to censure Wilson, “except, at the end, say ‘We would adopt a resolution of censure but for that crazy Supreme Court decision in the Houston Community College System, which said we can’t do that.’”

Justice Amy Coney Barrett was also skeptical of Kimberly’s efforts to distinguish between speech that occurs within the “legislative sphere” – at formal meetings, on the floor of a legislative body, and in the records – that can be censured, and speech that occurs outside that sphere, which cannot be. Does this mean, she queried, that a legislator can use “all kinds of horrible racial slurs” on the floor of the legislature and be censured for that, but then use the same kinds of slurs a few minutes later in a press conference without any possibility of censure?

After Kimberly told Barrett that she was correct, Kagan picked up the thread a few minutes later. “Your position,” she said, makes the distinctions between where the speech occurs and the language that the elected body uses “critical.” But, she concluded, “it’s just not clear that either of those distinctions should matter in the end.”

Roberts also warned Kimberly that if Wilson’s position were to prevail, it would spawn large amounts of litigation. Whenever there is a censure, Roberts predicted, it would lead to allegations of libel or defamation. Otherwise, Roberts reasoned, the elected official who is the subject of the censure would effectively be conceding the truth of the censure resolution.

Justice Brett Kavanaugh seemed to advocate for a narrow decision. He stressed that the justices only had to decide that “a mere censure does not trigger a retaliation claim. And I think it’ll be difficult, potentially, to draw lines beyond that.” Given the potential perils of saying more, it seems likely that Kavanaugh may have at least four justices who agree with him.