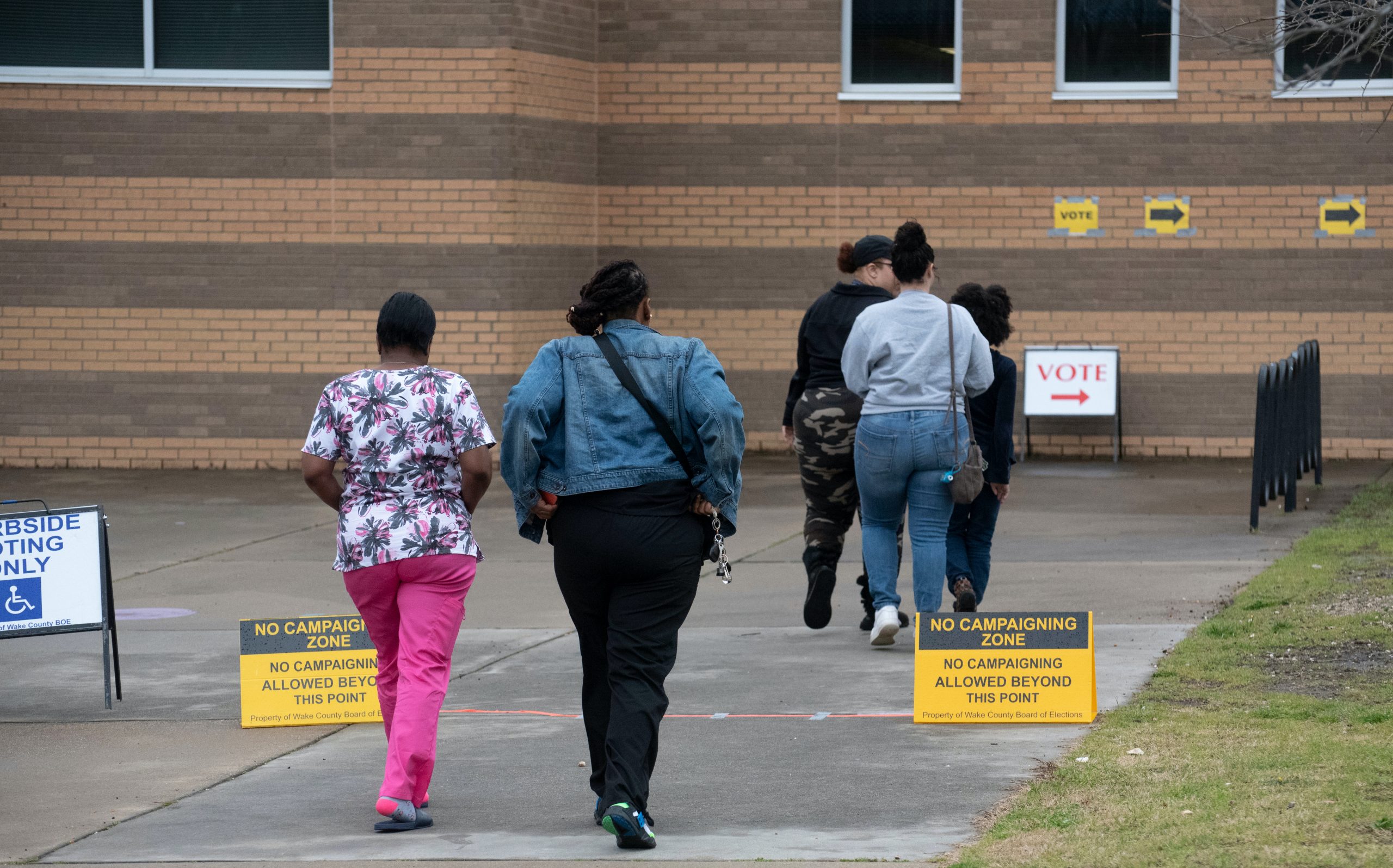 Voters walk into a Raleigh, NC, voting site in 2020. (Sharkstock via Shutterstock)

For the third time this term, the Supreme Court will weigh in on whether someone can stage an intervention – the legal kind, that is. On Monday, in Berger v. North Carolina State Conference of the NAACP, the justices will consider an effort by two Republican leaders of the North Carolina legislature to join a lawsuit to defend the constitutionality of the state’s voter-identification law when the state’s attorney general, a Democrat, is already defending the law on behalf of the state’s board of elections.

The argument comes less than a month after the justices heard oral argument in a dispute over whether a group of Republican-led states can defend a contentious Trump-era immigration policy after the Biden administration opted not to do so. And it comes less than three weeks after the justices ruled, by a vote of 8-1, that Kentucky’s attorney general should have been allowed to intervene to defend a state law restricting abortion after another state official declined to do so.

The North Carolina legislature passed the voter-ID law at the center of the case in December 2018. It was the legislature’s second effort in five years to impose an ID requirement for voting. In 2016, the U.S. Court of Appeals for the 4th Circuit struck down an earlier version of the law. After taking office, the state’s Democratic governor, Roy Cooper, dismissed North Carolina’s petition seeking Supreme Court review of that decision.

The 2018 law requires voters to provide photo identification to cast a ballot, either in person or absentee, and instructs county election boards to provide ID cards at no cost to voters. The law also increases both the number of partisan poll watchers permitted and the grounds that an individual voter can raise to challenge another voter’s ballot.

After the law went into effect over Cooper’s veto, the North Carolina State Conference of the NAACP and several of its local chapters immediately filed a lawsuit in federal court. The NAACP argued that the law violates Section 2 of the Voting Rights Act, which (among other things) bars racial discrimination in voting, because it disproportionately harms Black and Hispanic voters. The NAACP also contended that the law violates the Constitution by intentionally discriminating against those voters, and it asked the district court to block the state from enforcing the law. 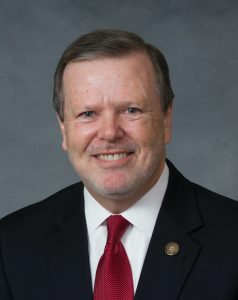 Philip Berger, the leader of the North Carolina Senate, and Timothy Moore, the leader of the North Carolina House of Representatives, sought to intervene in the lawsuit – initially to represent the legislature’s interest in defending the law but later to also represent the state’s interest. They contended that Josh Stein, the state’s attorney general, was not vigorously defending the law, but was instead simply trying to determine what law state election officials needed to enforce. After a circuitous route through the district court and the court of appeals, the full 4th Circuit ruled, by a vote of 9-6, that the district court was not wrong when it rejected the legislators’ request to intervene in the case because Stein and the board of elections were already defending the law. Rather than showing that Stein’s representation was inadequate, the court of appeals reasoned, the legislators had raised only “garden-variety disagreements over litigation strategy.” Indeed, the court of appeals noted, Stein had convinced the 4th Circuit to reverse a district court ruling that temporarily blocked the state from enforcing the law in the upcoming primary election. The legislators came to the Supreme Court last August, asking the justices to weigh in – which they agreed in November to do.

Berger and Moore criticize the 4th Circuit’s ruling as having “adopted a one-size-fits-all presumption that creates a nearly insurmountable barrier to a state legislature intervening in a case in which state executive branch officials are already participating.” A presumption that the legislators do not need to intervene because state officials are already defending the law does not give enough weight to the state’s important interest in defending the constitutionality of its laws, they say, as well as its designation of legislative leaders to defend state laws when they are challenged in federal court. 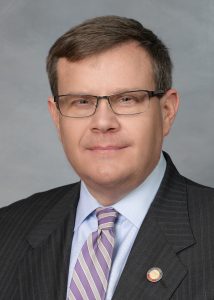 North Carolina, the legislators explain, has “two fundamental interests at stake in the voter ID litigation: an interest in administering elections and an interest in defending the State’s duly enacted statutes.” The board of elections has said that its primary concern is the administration of elections, while the legislators’ focus is defending the law on its merits. “North Carolina has multiple interests at stake in this case,” the legislators stress, “and the State’s decision to have those interests represented by multiple agents is a choice that the federal courts should not second guess.”

The legislators argue that when reviewing a district court’s determination that there is no right to intervene because the state’s interest is adequately represented, the court of appeals should take a fresh look at such decisions, a legal standard known as “de novo.” By contrast, they contend, a decision to permit intervention is subject to a more deferential standard, known as abuse of discretion, which allows the court of appeals to overturn the decision only if it was clearly wrong. Subjecting the two kinds of determinations to the same standard of review, the legislators assert, would “blur the distinction between the distinct types of intervention.”

In its brief on the merits, the NAACP argues that the legislators’ position is contrary to what it characterizes as both a longstanding and a “simple, commonsense rule”: When a party argues that it has a right to intervene in a case to represent the same interest as a party that is already in the case, the party seeking to intervene “must overcome a presumption that the existing party adequately represents that interest.” Allowing someone to intervene simply by “pointing to disagreements about litigation tactics,” the NAACP tells the justices, “would needlessly clutter and prolong litigation, burden litigants and the courts with duplicative (or inconsistent) filings and evidence, and promote chaos and confusion.” The NAACP contends that this conclusion also follows from federal law, which gives the state the right to intervene to defend the constitutionality of a state law only when a state agency, official, or employee is not already doing so. “If anything undermines a state’s dignity,” the NAACP posits, “it would be a rule requiring federal courts to routinely flyspeck the litigation choices of state attorneys general and grade them on their ‘adequacy’ in carrying out their constitutional duties.” 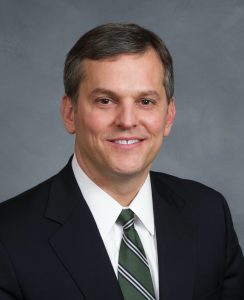 And when reviewing the determination of whether interests are adequately represented, for purposes of a motion to intervene as of right, the NAACP argues, appeals courts should apply the deferential abuse-of-discretion standard. The question of whether something is “adequate,” the group writes, is “an inherently fact-specific and context-sensitive inquiry that calls for deference to district courts’ on-the-scene judgments.”

In a separate brief, the state elections board – represented by Stein – does not rule out the possibility that Berger and Moore could at some point be entitled to intervene on behalf of the legislature. But the legislators have no right to intervene now, on behalf of the state, the board insists. Like the NAACP, the board contends that there is a presumption that Stein’s representation of the state’s interest is adequate. And indeed, the board notes, his representation is more than adequate, as shown by his success in obtaining the reversal of the district court’s order temporarily blocking the state from enforcing the voter-ID law. The board vows that it is “poised to defend the law at trial and, if necessary, again on appeal.”

Allowing the legislators to intervene on behalf of the state would also violate the state constitution, the board contends. “For nearly 250 years, since even before the United States was formed, North Carolina’s foundational charter has strictly mandated that the State’s branches of government be ‘forever separate and distinct from each other.’” Permitting the legislators to represent the state’s interest in litigation, rather than in the legislative process, “would breach that constitutional line,” the board concludes.