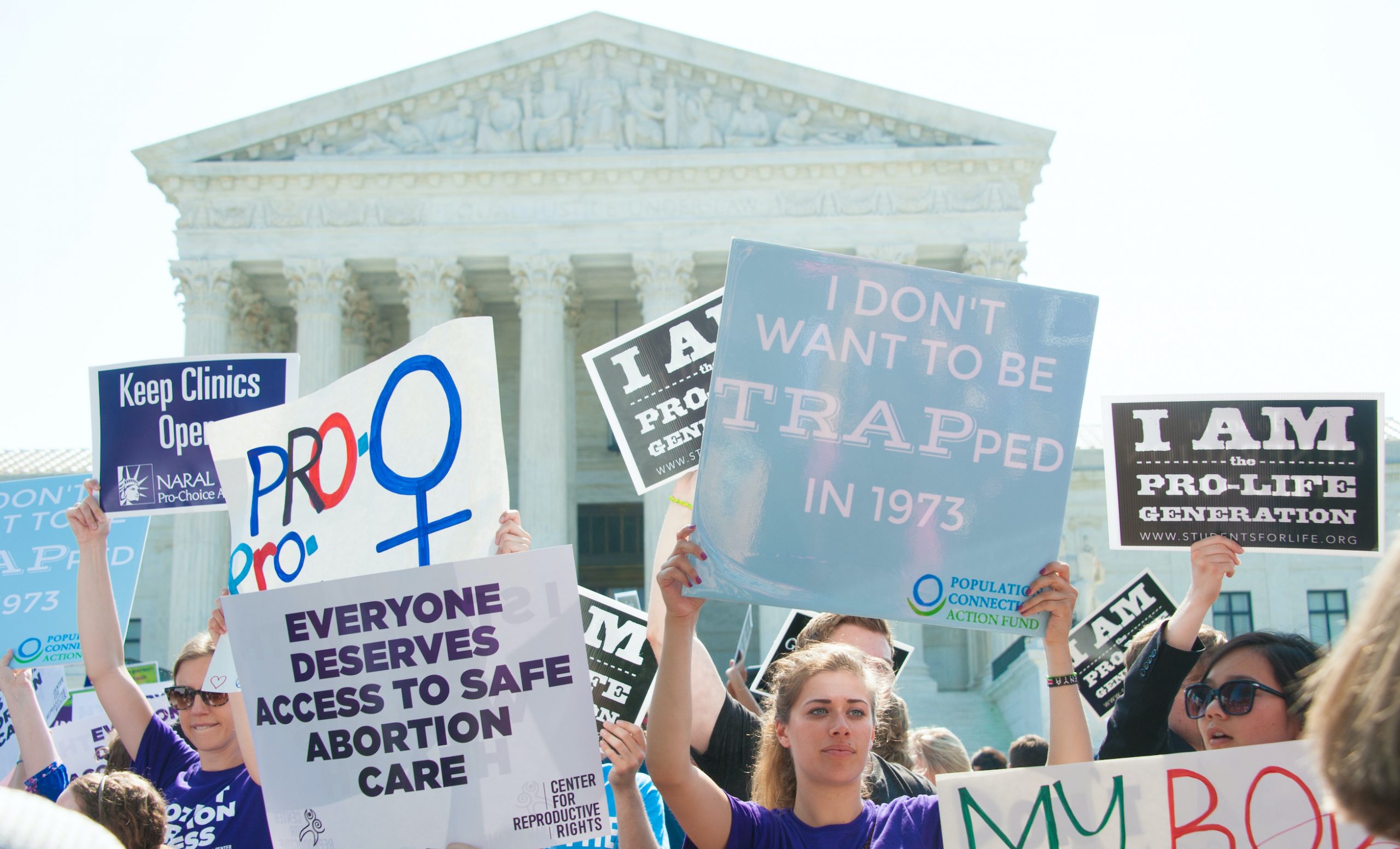 Activists on both sides of the abortion debate protest outside the Supreme Court in 2016. (Rena Schild via Shutterstock)

The Supreme Court will hear oral argument on Nov. 1 in a pair of cases challenging the Texas law that bans nearly all abortions after the sixth week of pregnancy. In two orders issued on Friday afternoon, the court granted requests by the Biden administration and a group of Texas abortion providers to leap-frog proceedings in the court of appeals, but it allowed the law to remain in effect for now — a decision that drew a stinging dissent from Justice Sonia Sotomayor.

The two orders suggest that the court will not directly weigh in on whether the Texas law, known as S.B. 8, violates the constitutional right to obtain an abortion. Instead, in the case brought by the Biden administration, the court will consider whether the federal government has the right to sue in federal court to block the law’s enforcement. And in the case brought by the abortion providers, the court will assess the law’s unusual private-enforcement structure, which deputizes private individuals to bring lawsuits against doctors, clinics, or anyone else who “aids or abets” an abortion.

The Biden administration had asked the court to block enforcement of S.B. 8 while the litigation proceeds, but the justices “deferred” that request “pending oral argument,” meaning the law will remain in place until at least Nov. 1. It was the second time since S.B. 8 took effect on Sept. 1 that the court declined to block the law on an emergency basis.

The court’s Friday orders came in two different cases that came to the court at different times and in different procedural postures, but which have now converged. The Biden administration came to the Supreme Court in United States v. Texas, its challenge to the S.B. 8’s constitutionality, on Monday. The Department of Justice asked the court to reinstate a decision by a federal district judge who declared the law unconstitutional and temporarily blocked it. The district judge’s decision is no longer in effect because the U.S. Court of Appeals for the 5th Circuit issued a stay.

In Whole Woman’s Health v. Jackson, the abortion providers asked the justices in late September to weigh in on S.B. 8’s private-enforcement mechanism. They urged the court to act without waiting for a final ruling from the 5th Circuit on the substance of the law. The court did not act on the providers’ request to fast-track consideration of their appeal for nearly a month, but after the Biden administration came to the Supreme Court on Monday, the justices ordered Texas to file its responses in both cases by noon on Thursday.

In its filings on Thursday, Texas urged the court not to intervene. It told the justices that “[n]either the federal government nor abortion providers are entitled to demand Texas write its laws to permit them to be challenged” in federal court before they are enforced. But if the court did decide to review the merits of S.B. 8 on an expedited basis, Texas added, it should use the case as an opportunity to overrule the court’s landmark rulings in Roe v. Wade and Planned Parenthood v. Casey, establishing the constitutional right to an abortion.

In its two brief orders on Friday, the court granted “certiorari before judgment” – that is, review before the court of appeals issues a final ruling — in both cases, and it set a highly expedited briefing schedule, culminating in oral arguments in just 10 days.

The court gave no indication that it will take up Texas’ suggestion to use the Texas litigation to consider whether Roe and Casey should remain on the books. But on Dec. 1, the court is scheduled to hear a Mississippi abortion case, Dobbs v. Jackson Women’s Health Organization, that directly challenges Roe and Casey. Under those precedents, states cannot ban abortion prior to the point of viability, or around 24 weeks of pregnancy. Texas’ law bans nearly all abortions after about six weeks, and Mississippi’s law (which was blocked by lower courts before it took effect) would ban nearly all abortions after 15 weeks.

Sotomayor wrote a partial dissent from the court’s Friday order in United States v. Texas. In a six-page opinion, she argued that the court should have put S.B. 8 on hold now, and she stressed that the court’s failure to do so “will have profound and immediate consequences” for Texans in need of an abortion. “There is no dispute that under this Court’s precedents,” she noted, “women have a constitutional right to seek abortion care prior to viability.” But “S.B. 8 was created to frustrate that right by raising seemingly novel procedural issues,” she argued, and “it has had precisely the intended effect.”

Therefore, Sotomayor posited, the court should have blocked enforcement of the law while the challenges were being litigated. “Every day that S.B. 8 remains in effect is a day in which such tactics are rewarded,” she concluded. “And every day the scheme succeeds increases the likelihood that it will be adapted to attack other federal constitutional rights.”