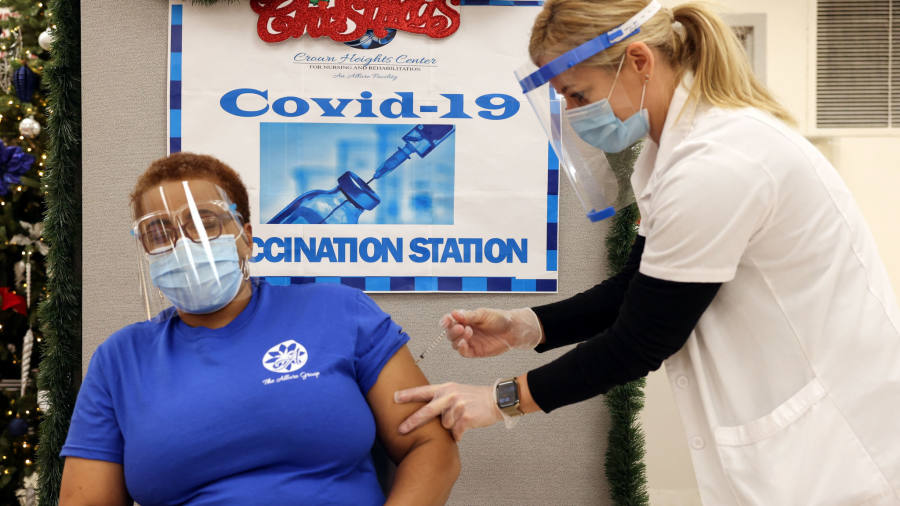 Florida’s seniors will be next in line to get coronavirus vaccines under a plan laid out by governor Ron DeSantis, bucking guidance from the US Centers for Disease Control and Prevention that gave equal consideration to workers defined as essential.

US petroleum demand remained weak ahead of the holiday period, according to Energy Information Administration data released on Wednesday. Total demand for fuels fell by 250,000 barrels a day last week and averaged less than 19m b/d in the past four weeks, down 9 per cent on the same period last year.

The UK’s R number rose slightly to between 1.1 and 1.3, the latest government figures show. The reproduction number range was widened from between 1.1 and 1.2 five days ago, meaning new coronavirus infections are increasing by between 1 and 6 per cent per day.

The number of Americans applying for unemployment benefits slid last week to 803,000, but remained at elevated levels. Weekly jobless claims decreased by 89,000 in the week ending December 19, compared with the previous week, the labour department said.

The US government has signed a $356m deal with Merck to support the development and manufacture of its potential drug for seriously ill Covid-19 patients. Merck acquired the potential drug as part of a $425m deal to buy the outstanding shares of OncoImmune last month.

The US government is doubling its order of Covid-19 vaccines from Pfizer/BioNTech, bringing its total purchase to 200m doses for about $4bn. Pfizer has agreed to provide 100m additional doses by July 2021, of which at least 70m will be delivered by the end of June.

Iran had the lowest daily death toll in more than three months on Wednesday. The number of deaths fell to 153, which is the lowest since September 18, when daily fatalities started going up and surpassed 400 for more than a month.

Ireland has said a member of Micheál Martin’s government has tested positive for coronavirus, prompting all other cabinet ministers to restrict their movement while awaiting tests for Covid-19.