Republicans in the House of Representatives have blocked a Democratic party effort to give Americans bigger pandemic relief payments, intensifying a crisis sparked by Donald Trump’s objection to a $900bn stimulus package passed by Congress.

Nancy Pelosi, the Democratic House speaker, failed to secure agreement from Republicans to boost the value of pandemic relief cheques from the $600 per person agreed in the legislation to $2,000. Mr Trump said earlier this week that the bill his team helped negotiate was a “disgrace” and demanded higher payments.

Mr Trump sparked the year-end chaos on Tuesday when he stunned even his own party and advisers by rejecting the bill, which was passed on Monday after months of contentious negotiations. Democrats had pushed for $2,000 stimulus cheques but were rebuffed by Republicans because higher direct payments would have substantially increased the price tag of the relief package.

Democrats, who control the House, will on Monday hold a vote on the higher cheques, which failed on Thursday because it required “unanimous consent” under procedural rules. The measure should pass because of Democrats’ control the chamber, but it remains unclear if the Republican-controlled Senate will agree to increase the stimulus payments.

The crisis on Capitol Hill has sparked fears about a government shutdown over the holidays. The $900bn measure was bundled with a $1.4tn omnibus spending bill to fund the government and, unless Mr Trump signs the package into law by midnight on Monday, it will run out of money.

While both chambers of Congress passed the government funding and Covid-19 relief package with the more than the two-thirds majority required to override a presidential veto, it remains to be seen whether the surprise rejection by Mr Trump has altered the political calculus for some lawmakers.

If the Senate does not follow the expected House move on Monday by backing bigger relief cheques, Congress will have to secure a short-term funding extension to keep the government open. But the tight timetable because of the holiday period has boosted the chances of a shutdown.

Mr Trump’s eleventh-hour intervention has created a political conundrum for Mitch McConnell, the Republican Senate majority leader. Democrats have started using the call from Mr Trump for higher payments to attack Republican senators in Georgia, who are trying to hold their seats in two run-off elections next month.

Mr Trump sparked further chaos on Wednesday when he formally vetoed the annual defence spending legislation, a $740bn bill that funds everything from weapons development and procurement to military pay.

Congress is expected to override the veto — for the first time during Mr Trump’s presidency — as few lawmakers want to block legislation that pays the salaries of American troops, particularly during the festive period.

The end of year turmoil in Washington comes as Mr Trump still refuses to accept the result of November’s presidential election, which he lost to Joe Biden. The president has in recent days continued to meet lawyers and allies who have been propagating wild conspiracy theories about voter fraud and corruption.

Mr Trump has taken aim at Republicans, including Mr McConnell, who have acknowledged that Mr Biden will become the president on January 20. 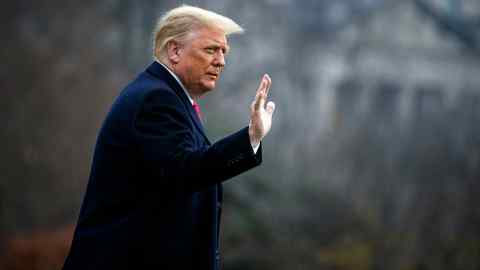 In the days before Christmas, Mr Trump has also issued more than 40 pardons, which have sparked fierce criticism, including from Republicans. On Wednesday, he pardoned Paul Manafort, his former presidential campaign manager, and Charles Kushner, whose son Jared is married to his daughter Ivanka.

He has also issued pardons to four former private security contractors who killed unarmed Iraqi civilians when working in Baghdad for Blackwater, a firm founded by Erik Prince, whose sister Betsy DeVos is education secretary.

And he has pardoned two former members of Congress who had been convicted of crimes, as well as two people convicted in connection with the probe into Russian interference in the 2016 election. Ben Sasse, a Nebraska senator who is one of the few Republican critics of Mr Trump, described the slew of pardons as “rotten to the core”.