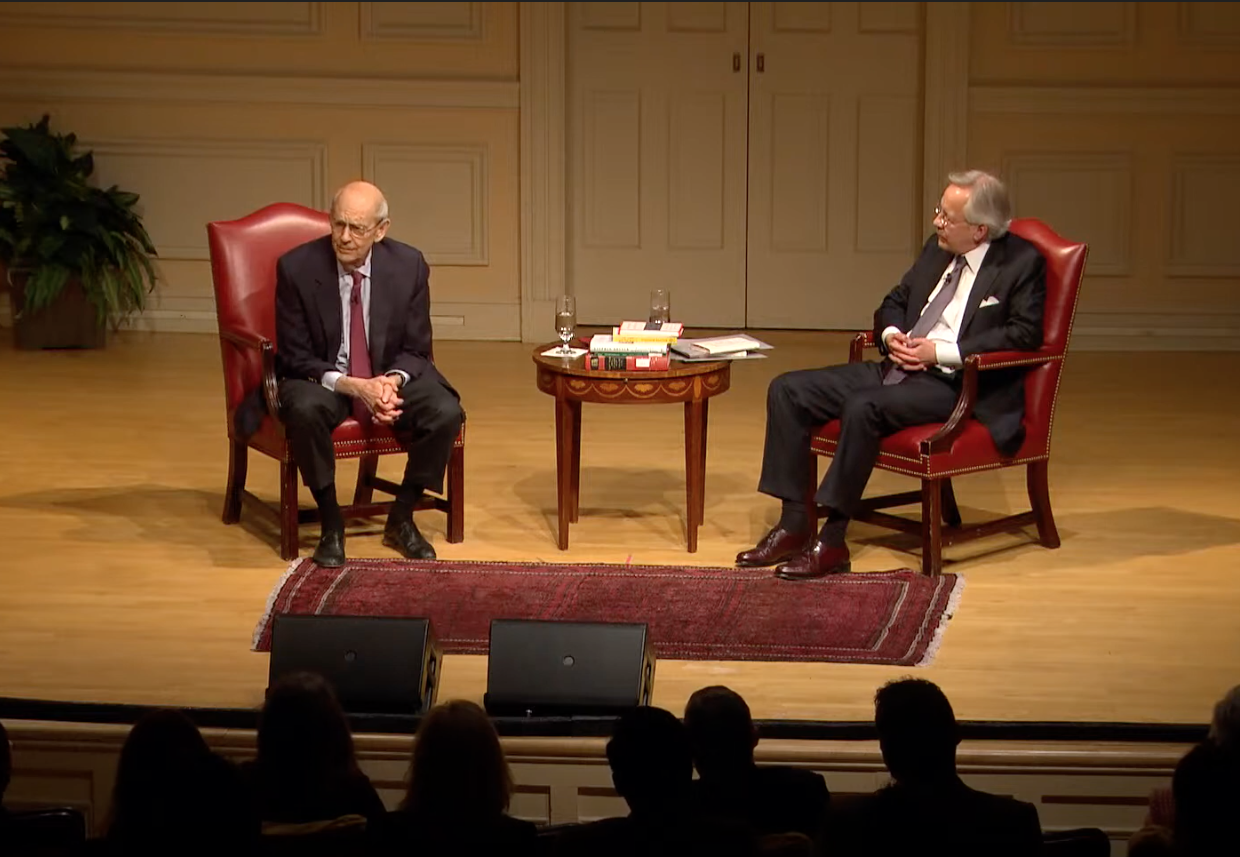 Sitting at the edge of his seat on stage at the Law Library of Congress Thursday afternoon, soon-to-be-retired Justice Stephen Breyer was exuberant and humble as ever about his work on the court. Jeffrey Minear, the counselor to Chief Justice John Roberts, spoke with Breyer about his tenure — and his books — for an annual lecture sponsored by the Supreme Court Fellows Program.

Minear began by asking about changes to the court since Breyer clerked for Justice Arthur Goldberg in the 1964-65 term. The justice laughed, “Well there are of course changes in personality.” But in that period, he said, the court functioned on a mission. “There’s no reason that you have to have a court built around an idea,” he said, “that isn’t better, and it isn’t worse.” Later on, he said, things changed. “And since I’ve been on the court, 27 years, you sort of just did your job, decided the cases.”

The conversation turned to diversity of experience on the court. Eight of the nine current justices attended law school at either Harvard or Yale, and most honed their skills working at the Department of Justice or at elite East Coast law firms. As President Joe Biden conducts his search for Breyer’s replacement, some lawmakers have urged the president to nominate a successor with a more diverse resume. Breyer seemed to agree. Chief Justice Earl Warren’s experience as a successful politician who was elected three times as the governor of California, he said, probably helped Warren achieve a unanimous result in Brown v. Board of Education.

“A breadth of experience is helpful. I’m pretty sure. I can’t prove it.”

Breyer moved to explaining how he approaches a case, from reading the briefs to writing an opinion. He emphasized that, at each stage, he is looking for what he does not know, looking to learn something. This, he admitted with a laugh, has led to “some pretty weird questions.” The worst one, he said, was when, in a trademark case, he asked counsel to imagine he had a comb in the shape of a grape. “That didn’t work.”

Throughout the talk, Breyer referenced his well-known love of meeting with students of all ages. The justice pulled his pocket Constitution from his suit jacket. “Basically, it’s a boundary-setting document,” one that leaves most things up to the public to decide by democratic processes. And, he said, “If you don’t participate, this document won’t work.”

Breyer called on judges to think of the global scale of their decisions and to stay involved in the humble day-to-day of judging. Ultimately, he said, “Just do your job.” Laughing, he added that his father told him that and: “Stay on the payroll!”

When asked what he hoped to see when “looking up at the bench” after his retirement, Breyer dodged the substance of the question. Instead, he spoke of his belief in a legal profession unified in resolving issues under the rule of law. “I hope to see people who are looking down and seeing the same thing I’ve seen for 27 years. That’s what I hope! I certainly hope that.”