Bill Maher Panics Over Trump’s ‘Radio Silence’ After Leaving White House. – ‘Does That Not Alarm You A Little?’ 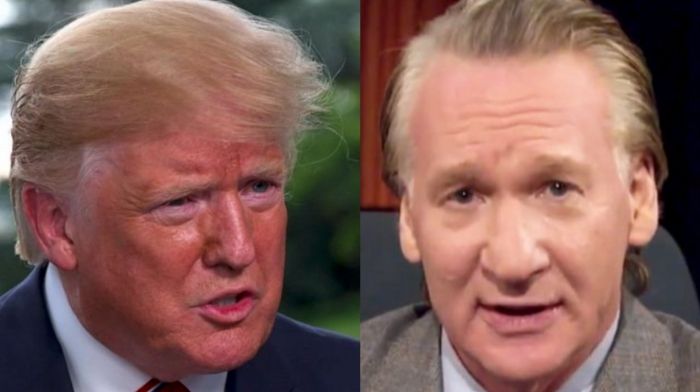 “Real Time” host Bill Maher is in full panic mode over the fact that former President Donald Trump has been “very quiet” since leaving the White House.

During his show on Friday night, Maher talked about how nervous he is about the “radio silence” that has come from Trump in the weeks since he left office.

“Does that not alarm you a little?” Maher asked his viewers, according to Fox News. “It’s like in Jaws when the shark went out to sea for a little while. I think it will be back.”

Later in the show, Maher once again brought up how quiet Trump has been as he talked to his panel.

“Where is Trump?” the HBO host wondered. “It’s like he’s in the ‘Where Are They Now?’ bit. I am so shocked that this guy has been so quiet! Are you not?”

“I just don’t trust that, you know? It’s just so not like him! ‘Radio silence’ is just never a term I associated with Donald Trump,” Maher added. “He isn’t exactly … ‘fading away gracefully.’”

CNN commentator Van Jones, who was appearing on “Real Time” as a guest, brought up House Minority Leader Kevin McCarthy’s recent visit to Mar-a-Lago to “kiss the ring,” comparing Trump to Marlon Brando’s character in The Godfather.

“He’s not giving up control over the Republican Party,” Jones said of the former president. “And I think that it’s going to put a lot of pressure on Republicans who thought they were gonna be able to turn the page. But when Kevin McCarthy, who knows better, decides he’s going to continue to allow Donald Trump to run the party into the ground, that’s not good.”

This comes one week after Maher said that “we can’t blame everything” on Trump when it comes to the coronavirus pandemic. .

“Now that we’ve gotten rid of Trump, we’re faced with this problem as Americans. … Now we can’t blame everything on him,” he said. “Now we gotta look in the mirror and we’ll find out in the next hundred days, like, if it was all Trump who was the bad guy.”

“I’ve said from the beginning with the virus, he certainly played his part horribly, horribly beginning with getting that little team out of China that could’ve stopped the whole f—in thing to begin with, but it’s also, I think, on the American medical establishment that never told the American people the best way you can handle this is get yourself in better shape, get your immune system better, stop eating s— food and sugar and day drinking,” Maher added.

“They never had the guts to do that,” he continued. “They wouldn’t even say the word ‘obesity’ on television. That would be fat-shaming. The code is now ‘precondition.’”

This piece was written by James Samson on January 31, 2021. It originally appeared in LifeZette and is used by permission.