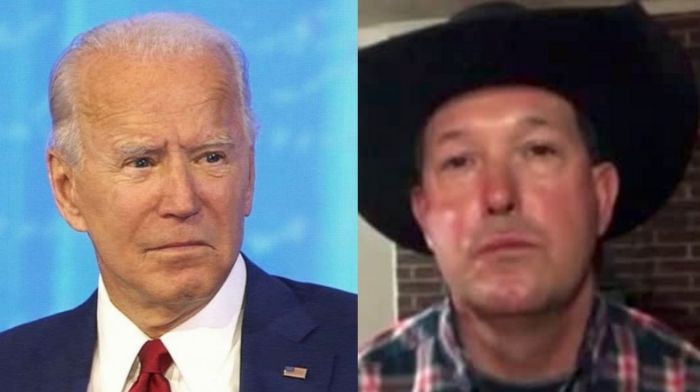 Jason Jernigan is a laid-off Keystone XL Pipeline worker who lost his job after President Joe Biden shut it down. On Monday, he went on Fox News to say that Biden’s decision has left him unsure on how he’ll make a living moving forward.

“I spent my whole life learning this craft and this skill and it’s not as easy as somebody might think or people might think to just start all over at 45 years old,” said Jernigan. “I guess I could possibly get a job as a greeter at Walmart, I don’t know.”

Jernigan, a third-generation oil and gas worker, went on to say that he feels like his livelihood has been stolen from him by the Biden administration.

“I’ve been pipelining for 21 years. This is all I know to do,” he said. “The recent administration has taken my livelihood from me and expecting me to get a job somewhere else. I’ve got my whole life invested in this.”

Jernigan was set to start working on the pipeline next month after being hired last year when then-President Donald Trump signed off on it.

“I was actually hired on the Keystone when President Obama was in office and it got canceled that time,” he added.

Back in January, Biden climate czar and former Secretary of State John Kerry said that workers who have lost their job in the pipeline cancellation should take jobs in areas that are going to be helpful in a future green economy.

“You look at the consequences of black lung for a miner, for instance, and measure that against the fastest-growing job in the United States, [which] before COVID was the solar power technician,” Kerry said.

“The same people can do those jobs, but the choice of doing the solar power one now is a better choice,” he added.

Jernigan, however, was not having any of this.

“First of all, I haven’t been offered a job in the solar panels industry and I haven’t been sent an application or a phone number or anything,” Jernigan said. “I don’t know if I have to do the work, the ground work and everything it takes to get there.”

“And secondly, I’ve done the research, if I went to work for the solar panel right now, I would be taking a $35-an-hour pay cut and lose my benefits and retirement,” he added.

Read Next: Gov. Kristi Noem Reveals Why Cancellation Of Keystone Pipeline Was ‘Devastating For South Dakota’ – ‘We Lost Jobs Immediately’

This piece was written by James Samson on March 2, 2021. It originally appeared in LifeZette and is used by permission.

Read more at LifeZette:
Fox News Back In The Fold
Rush Limbaugh Is Laid To Rest At Cemetery In St. Louis, Missouri
Prominent Baptist Pastor Says Evangelical Support For GOP Is Conditional