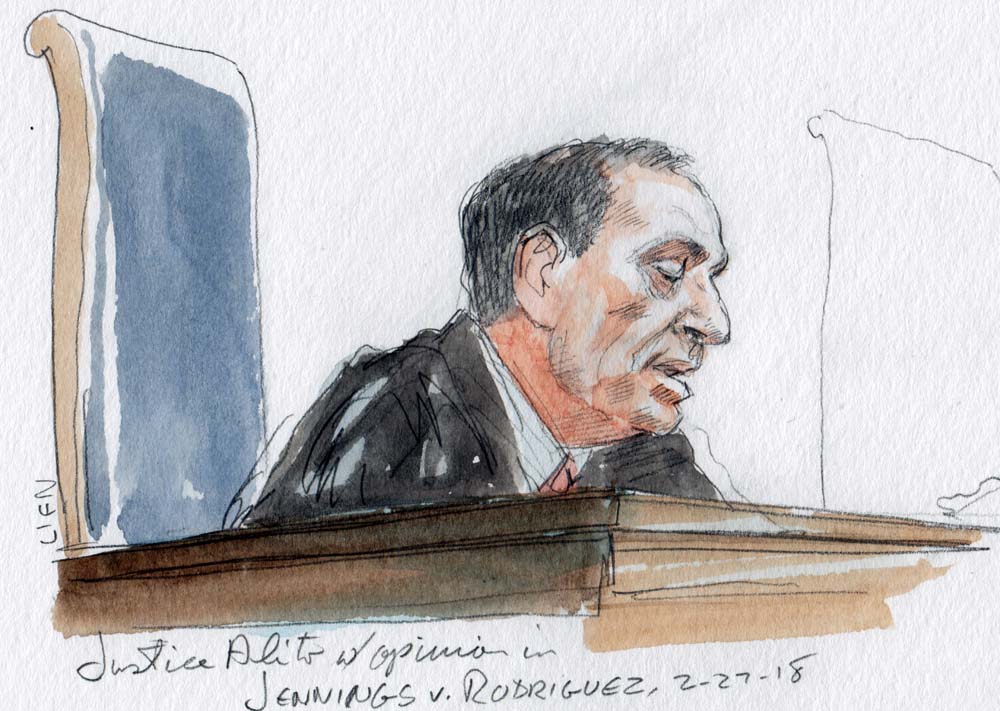 Justice Samuel Alito, depicted here announcing an opinion in 2018, is one of only two sitting justices who own stocks, financial disclosures show. (Art Lien)

Justice Samuel Alito earned $24,000 in 2021 for teaching gigs at two law schools, and he continued to own a wide range of stocks, according to his recently released annual financial disclosure.

Each justice is required to file a financial disclosure every year by May 15 with the Administrative Office of the U.S. Courts, which typically makes the forms available each June to members of the public who request them. The regulations governing the disclosures allow the justices to obtain up to 90 additional days to file. Alito has used this extension in each of the past three years, and he was the only justice to do so in two of those years.

In January 2021, Alito co-taught a three-day seminar on constitutional interpretation at Regent University Law School, a law school based in Virginia Beach that touts its faculty, “exceptional academic program,” and “Christ-centered mission.” Regent University was founded by televangelist Pat Robertson; the law school, whose website describes Alito as a “senior lecturing fellow,” paid Alito $9,000 in 2021.

Alito is billed as a “visiting professor of law” at Duke University’s law school, which paid him $15,000. One press release by Duke indicated that Alito has taught at the law school since 2009. He co-teaches a week-long seminar on constitutional interpretation there, as well as a course for judges.

Alito was reimbursed for travel expenses relating to his appearances at three different Catholic institutions. In September 2021, Alito visited Notre Dame’s law school, where he gave a speech criticizing complaints about the court’s emergency docket, sometimes nicknamed the “shadow docket.” The use of the term “shadow docket,” Alito suggested, was part of a narrative that “feeds unprecedented efforts to intimidate the court or damage it as an institution.”

In October 2021, Alito traveled to Beverly Hills, California, to speak at the 50th anniversary gala for St. Thomas Aquinas College, which has campuses outside Los Angeles and in Massachusetts. According to a news release by the college, Alito told the audience of more than 600 that “[f]or more than 50 years, Thomas Aquinas College has been on a quest for truth.”

And in November 2021, Alito was the keynote speaker at a celebration of the 10th anniversary of the Center for Law and Religion at St. John’s University Law School. Speaking at a private club in New York City, Alito – according to a press release by the center – “spoke generally about the value of religious freedom and praised the work of the Center’s directors.”

Alito’s disclosure indicated that he continues to own mutual funds and a wide range of blue-chip stocks, including 3M Co., Abbott Laboratories, Boeing, Caterpillar, Dow, DuPont De Nemours, Johnson & Johnson, Procter & Gamble and Raytheon. As Gabe Roth, founder of Fix the Court, observed last week, Alito is one of only two justices on the court who own stocks. He owned 28 at the end of 2021, compared with four for Chief Justice John Roberts. Alito sold his Boeing stocks, Roth noted, in August 2021 to allow him to participate in a case involving Boeing. When it became clear that the case would be dismissed, Alito once again bought stock in Boeing.

Alito’s disclosure, like those of his colleagues earlier this year, was released by the Administrative Office on individual thumb drives, in response to requests from members of the media and groups like Fix the Court. In May, President Joe Biden signed legislation that will require the Administrative Office to post the justices’ disclosures online, as well as require the justices themselves to report large stock transactions within 45 days.