Mark Zuckerberg on Tuesday came out in support of reforming US legal protections enjoyed by social media platforms, making Facebook the first internet company to concede ground in one of the major regulatory debates facing the industry.

The Facebook chief executive will appear before a Senate committee on Wednesday, alongside Twitter’s Jack Dorsey and Google’s Sundar Pichai, as part of a review into Section 230 of the 1996 Communications Decency Act, which gives tech platforms immunity from being sued over user-generated content.

In written testimony released ahead of the hearing, Mr Zuckerberg called on Congress to “update the law to make sure it’s working as intended”.

However, the Facebook founder warned that fully repealing Section 230 would mean that internet platforms would likely “censor more content to avoid legal risk” and curb investment in new technologies.

Mr Zuckerberg said: “We support the ideas around transparency and industry collaboration that are being discussed in some of the current bipartisan proposals, and I look forward to a meaningful dialogue about how we might update the law to deal with the problems we face today.”

Members of Congress have launched several attempts to rewrite the rules on Section 230, and President Donald Trump has also demanded reform or repeal of the law, suggesting the protections should be stripped from companies he alleges unfairly suppress conservative content.

Mr Zuckerberg did not say which specific reform proposals he backed, although one of the most prominent bipartisan efforts is that being led by Lindsey Graham, the Republican head of the Senate judiciary committee.

Aimed at curbing online child sexual exploitation, this act would create a national commission — including heads of law enforcement agencies, legal experts and industry executives — to set a series of “best practices” for internet companies to follow. Only companies that followed those guidelines would be granted Section 230 immunity.

The stance adopted by Mr Zuckerberg stood in contrast to Twitter’s chief executive. In his testimony, Mr Dorsey appeared to take aim at bigger platforms Facebook and Google.

“Eroding the foundation of Section 230 could collapse how we communicate on the internet,” Mr Dorsey said, “leaving only a small number of giant and well-funded technology companies” able to fully police content and deal with legal liabilities. 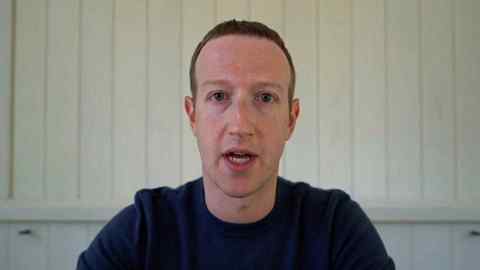 Twitter “does not have the same breadth of interwoven products or market size as compared to our industry peers”, he said.

In a shorter testimony, Google’s Mr Pichai called on the committee to “be very thoughtful about any changes to Section 230 and to be very aware of the consequences those changes might have on businesses and consumers”.

The pressure for reform of Section 230 has been building in Washington. The Trump administration launched its review of the law after social media groups took bolder actions to clamp down on misinformation and hateful content over the summer, in some cases adding cautionary labels to or removing posts by the president himself.

Mr Trump issued an executive order calling on the Federal Communications Commission to “clarify” when Section 230 should apply.