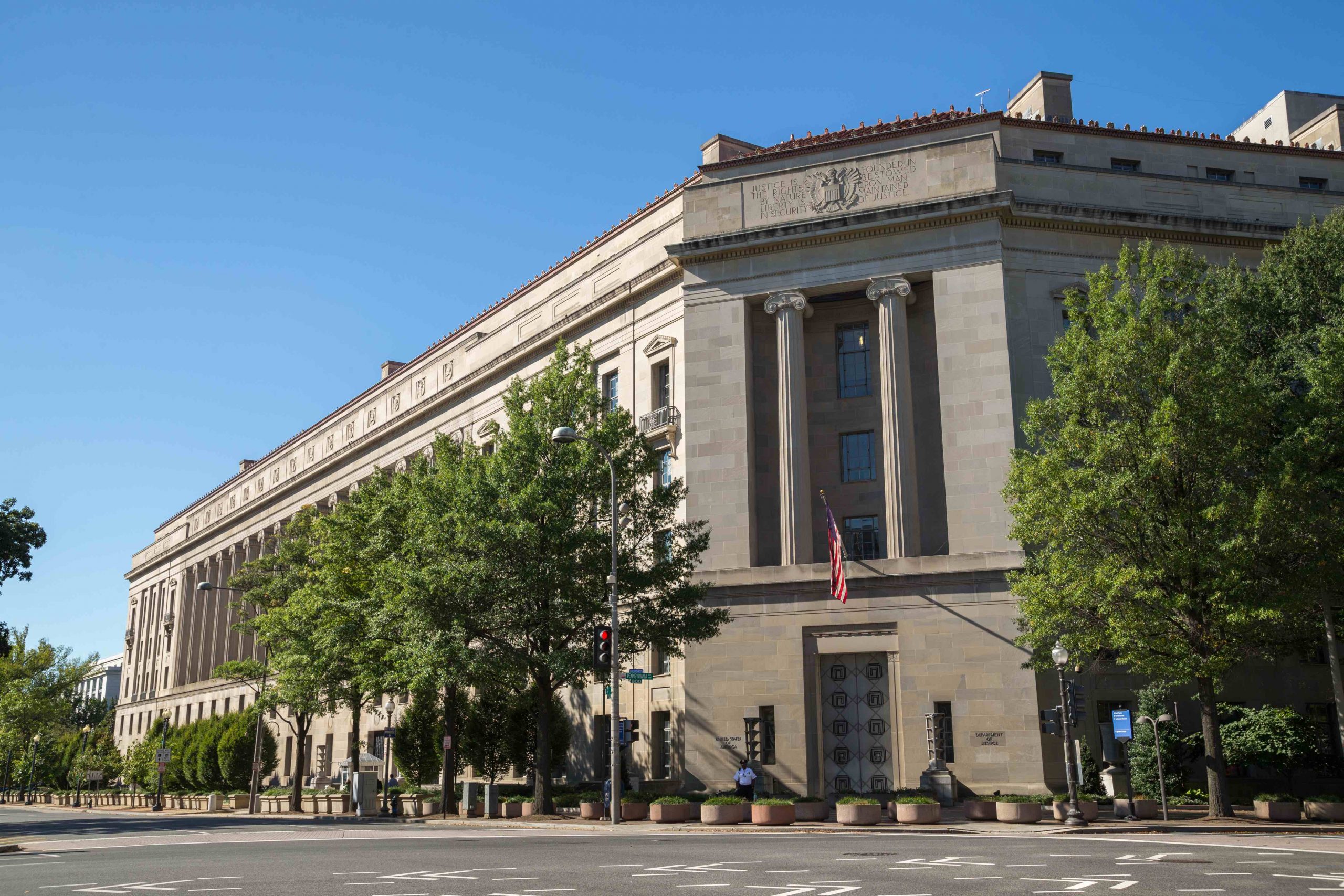 The Department of Justice has recovered more than $70 billion under the False Claims Act since 1986. (Blvdone via Shutterstock)

For decades, the Department of Justice’s government fraud enforcement efforts have been largely driven by whistleblower lawsuits filed under the False Claims Act. The statute’s qui tam provision encourages whistleblowers to file suit on behalf of the government and gives the government the opportunity to decide whether to take control of the case or allow the whistleblower to proceed. On Tuesday, the justices will consider the scope and timing of those options in U.S. ex rel. Polansky v. Executive Health Resources, and determine whether and when the government has authority to dismiss a False Claims Act suit after initially declining to take over the case.

Despite decades of partnership between government attorneys and whistleblower attorneys, the case pits the two groups against one another and represents the culmination of a simmering feud over their balance of power in qui tams (an abbreviation for a Latin phrase meaning “Who sues on behalf of the King as well as for himself.”) Both the government and attorneys representing whistleblowers contend that a ruling for the other will damage the tremendously successful qui tam system. The case represents a rare alliance between the Department of Justice and potential fraud defendants, who warn that limiting the government’s authority will lead to whistleblowers proceeding with meritless lawsuits and burdening both government and defendant resources.

DOJ has used the False Claims Act to recover more than $70 billion since 1986, much of it driven by whistleblower lawsuits and largely focused on health care and defense contracting. When the government prevails in a qui tam matter, the whistleblower typically receives between 15% and 30% of the recovery, with the government paying out billions of dollars to whistleblowers in recent decades. This has led to tremendous growth in the number of qui tam cases filed, with whistleblowers filing more than 500 cases annually in recent years. Although cases boast a far higher success rate when the government chooses to take over (referred to as “intervening”), an increasingly aggressive whistleblower’s bar has shown less and less of an inclination to defer to the government’s views of their cases and voluntarily drop qui tam suits based on DOJ’s decision not to intervene. In response, DOJ has ramped up use of its dismissal authority — not only declining to take over litigating qui tam cases, but affirmatively dismissing them to prevent the whistleblower from proceeding.

Disputes about whether and when DOJ can seek dismissal have heated up in recent years, centered around situations when DOJ initially declines to intervene and later decides to affirmatively seek dismissal. The result has been disagreement among U.S. courts of appeals as to whether DOJ must first intervene in order to dismiss a qui tam, and as to what standard should apply to the government’s motion to dismiss. Appeals courts have thus far adopted a range of potential standards reflecting varying textual analyses of ambiguous statutory language as well as varied views on the appropriate balance of power between the government and whistleblowers. Polansky will give the justices the chance to create a uniform standard and make clear when and how DOJ may seek to dismiss over a whistleblower’s objection.

Dr. Jesse Polansky filed his qui tam suit in 2012 after having worked for two months at Executive Health Resources, a subsidiary of UnitedHealth that assists hospitals in submitting bills to the government for Medicare-covered services. Polansky alleged EHR was violating the False Claims Act by causing its client hospitals to falsely designate certain services as “inpatient” rather than “outpatient” and to bill Medicare for those services at the higher, inpatient rates. Two years later, DOJ declined to intervene, and Polansky began litigating the matter without the government. In 2019, after five years of litigation including extensive discovery and failed efforts by the government to limit requests from EHR for document production and deposition testimony, DOJ moved to dismiss Polansky’s action. In doing so, the government pointed to the “tremendous, ongoing burden on the government” if the litigation continued, including participating in document discovery and devoting attorney resources to protecting the government’s interests. The government also noted it had reevaluated the case and had doubts about Polansky’s ability to prevail in the FCA action. Over Polansky’s objection, the district court granted the government’s motion to dismiss and the U.S. Court of Appeals for the 3rd Circuit upheld the lower court’s decision. Polansky brought the case to the Supreme Court, and the justices agreed to hear the case and presumably resolve the dispute among the courts.

Appeals courts across the country have come up with a wide range of procedures and standards for when the government can forcibly dismiss a non-intervened case. On one end is the view that the government has “an unfettered right to dismiss” a qui tam action. On the other end of the spectrum, the government is required to identify a rational relation between dismissal and achievement of a valid government objective.

While much of Tuesday’s argument is likely to center around textual analysis and the meaning of the language in the FCA, at the heart of the case are practical concerns and issues of separation of powers and the balance of power between the government and the whistleblower’s bar which has fueled DOJ’s massive FCA recoveries for nearly 40 years.

Polansky argues for a more extreme view than that taken by any of the courts of appeals — that the government gave up its authority to dismiss the suit when it initially declined to intervene and take over. In addition to his focus on the statutory language, Polansky raises the practical concern that whistleblowers will be “reluctant to invest the time and resources necessary to prosecute an action if the government can dismiss the case at any time” — a concern supported by the five years of litigation undertaken by Polansky in his case. Polansky claims his counsel has incurred approximately $20 million in attorney time and costs litigating the matter. The government counters that Polansky’s desired ruling might have the opposite effect from that which he hopes, as DOJ might be incentivized to force a dismissal during the initial stages of the case when there is no dispute the government has authority to dismiss, even if that will inevitably mean dismissing some suits which ultimately would have been successful.

The justices are unlikely to adopt Polansky’s extreme position, and Polansky alternatively argues the government should be required to intervene and demonstrate to the trial court that its dismissal decision is rational.

The government argues it should not be required to intervene in order to dismiss and that intervention is necessary only when the government desires to affirmatively move forward with a suit. The government also argues its dismissal authority should be limited only by constitutional constraints, and a government-sought dismissal should be set aside only where the whistleblower has established a constitutional violation, such as the dismissal being based on the whistleblower’s religion, race, or sex. While much of the government’s argument is devoted to textual analysis, the thrust of the argument is that the rationale for the qui tam system is to vindicate the government’s interests and the government thus must maintain the power to dismiss at all times, subject to only limited court review.

EHR’s arguments largely echo those of the government, while also asserting that taking away the government’s dismissal authority would create separation of powers problems by giving private citizens too much authority and render the FCA’s qui tam provisions unconstitutional — an unlikely result that potential defendants like EHR would welcome. A brief from the U.S. Chamber of Commerce, the American Health Care Association, and the American Hospital Association argues the government should be encouraged to use its dismissal authority more frequently, claiming there has been an explosion of qui tam actions and most declined actions are meritless yet strain resources of corporate entities, the government, and the judiciary. Polansky’s arguments are buttressed by a submission from the Taxpayers Against Fraud Education Fund — an organization supported by whistleblowers and their counsel. TAFEF argues the government should be required to explain its rationale and the timing of its dismissal decision, noting that whistleblowers and their counsel make substantial investments litigating non-intervened cases and have recovered billions for the government.

Although there have been few disputes over the government’s dismissal authority out of the more than 500 qui tam suits filed annually, the number could increase substantially if a future administration takes a more defense-friendly posture and seeks to reduce the impact of whistleblowers. Particularly if that is the case, the standard set by the justices will play a large role in determining the balance of power in future FCA practice.

The morning read for Monday, Feb. 6