The European Commission president acknowledged mistakes in the EU’s coronavirus vaccine strategy, but warned that failing to pursue a collective approach could have torn the union apart by pitting big member states against smaller ones.

Ursula von der Leyen told the European Parliament that the EU had been too late to approve some Covid-19 shots, too optimistic when it came to vaccine production capacity, and perhaps too confident that doses would be delivered on time.

She added that “mistakes were made”, which she deeply regretted, when it came to the introduction of export restrictions that had adverse implications for Northern Ireland last month. The measures were rapidly withdrawn.

But the commission chief urged the bloc to stick with its current strategy. “I cannot even imagine what would have happened if a handful of big member states had rushed to it and everyone else would have been left empty-handed, what it would have meant for our internal market and the unity of Europe,” she said in Brussels. “In economic terms it would have been nonsense, and it would have been, I think, the end of our community.”

Von der Leyen and national capitals are under intense pressure to find ways of accelerating the rollout of the EU’s vaccination programme as a slower authorisation process and production shortfalls leave the bloc trailing behind other major economies when it comes to the pace of immunisation.

The EU has given 3.9 vaccine doses per 100 residents compared with 12.8 in the US and 19.2 in the UK, according to data compiled by the Financial Times.

Von der Leyen’s acknowledgment of errors in the vaccine procurement overseen by the commission and run in collaboration with member states marks a change in tone from previous public defences by top EU officials.

Sandra Gallina, EU director-general for health policy and head of Brussels’ vaccine programme, last week made a defiant appearance at the parliament during which she insisted the bloc was in the “top league” on Covid inoculation internationally.

Von der Leyen is under particular fire in the media in Germany, where she previously served as defence minister and where some prominent politicians question the EU’s vaccine strategy. Markus Söder, the Bavarian premier, in January said the situation was “more than unsatisfactory” and asked why vaccine orders had not been placed earlier.

The attacks in Berlin underscore how the EU vaccine scheme works best for the smaller member states that make up the majority of the bloc, but can hold back bigger countries with the financial firepower to negotiate on their own.

The much quicker vaccine rollout by Britain, which left the EU’s single market just weeks ago and declined to join the bloc’s jab procurement last year, has further stoked discontent in some member state capitals.

London signed up months earlier than the EU for contracts for the BioNTech/Pfizer and Oxford/AstraZeneca jabs, the two main ones being used in Europe. 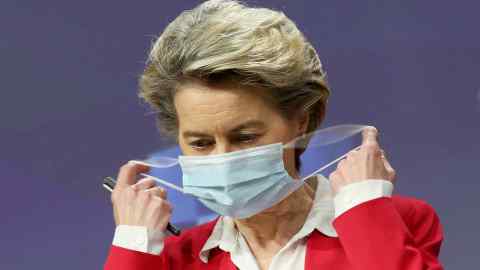 The EU has also had a damaging public row with AstraZeneca after the company disclosed that it would be able to deliver only 40m doses to the 446m population bloc during the first quarter of the year, rather than the 100m or more the EU originally expected.

The EU will next week launch an agenda to prepare itself for new strains of coronavirus and seek ways to accelerate identification of them. Von der Leyen said industry needed to match the pace of innovation in medical science by ramping up its manufacturing production.

“We can only hope to come to terms with this if we stick together — our common enemy is the virus,” she added.

Manfred Weber, who leads the MEPs in von der Leyen’s centre-right European People’s party, said that the EU had made mistakes but insisted that the important decisions taken had been the right ones. It was vital to be clear with EU citizens, he added, that demand for vaccines remained “much, much bigger than production — we need time”.

Iratxe García Pérez, the president of the left-of-centre S&D group, echoed the need for solidarity, urging MEPs to put aside “Cassandra-type messages” and to work together. Dacian Ciolos, of the Renew Europe group, said the EU had been right to spurn the go-it-alone approach seen in countries such as the UK.

Other MEPs had harsher words for von der Leyen. Beata Szydlo, a conservative Polish politician from the ECR group, complained of “words and empty promises”. Manon Aubry, of the Left group in the Parliament, claimed that the drug companies had taken charge, holding up a heavily redacted contract with one of them to bemoan the lack of transparency in the process.