Donald Trump’s Senate impeachment trial hurtled towards a swift conclusion on Friday, setting the stage for a vote this weekend on whether to convict the former president for inciting an insurrection.

Trump’s lawyers wrapped up their case on Friday after using just a fraction of the 16 hours they were allotted, after which senators from both parties posed questions to the Democratic impeachment managers and the former president’s legal team.

The trial will resume on Saturday morning, with both sides expected to make closing arguments followed by a final vote that could take place as early as Saturday afternoon.

Trump’s lawyers accused Democrats of a “campaign of retribution” against him and called the article of impeachment an “unjust and blatantly unconstitutional act of political vengeance”.

The former president was impeached last month by the House of Representatives on one charge of inciting an insurrection for his role in the January 6 attack on the US Capitol that left five people dead.

Many of the senators’ questions on Friday focused on Trump’s activities on January 6, including when he learned about the breach at the Capitol and whether Mike Pence was in danger when he sent a disparaging tweet about his own vice-president.

Trump’s lawyers anchored their arguments in several montages featuring Democrats, including reels of lawmakers calling for Trump’s impeachment as far back as early 2017, as well as clips of House members and senators urging their supporters to “fight” for what they believe in.

The legal team sought to equate Democrats’ use of the word “fight” with Trump’s own invocation to crowds of his supporters on the National Mall on January 6. Shortly before the riot, he said: “If you don’t fight like hell, you’re not going to have a country any more.”

Addressing Democrats in the Senate chamber, trial lawyer David Schoen said: “You didn’t do anything wrong . . . It’s a word people use, but please stop the hypocrisy.”

At one point, Michael van der Veen, one of Trump’s lawyers, claimed “extremists of various different stripes and political persuasions” had participated in the January 6 siege, and repeated the false claim that arrested rioters were members of Antifa, or far-left activists.

Schoen and Bruce Castor Jr, a former prosecutor from Pennsylvania, were widely criticised earlier this week for their performance in a debate on the constitutionality of the trial. One Republican senator, Bill Cassidy of Louisiana, responded to their arguments by voting with Democrats. “As an impartial juror, I’m going to vote for the side that did the good job,” he said.

Cassidy was pictured on Thursday holding a statement suggesting he was preparing to acquit the president, although his staff said that it did not mean he had made a final decision.

Trump’s lawyers met on Thursday with a small group of GOP senators who are among the former president’s most ardent defenders, including Lindsey Graham of South Carolina and Ted Cruz of Texas. The move attracted criticism given senators swore an oath to act as impartial jurors in the trial.

Cruz told reporters after the meeting that senators shared their “thoughts” on the team’s legal strategy.

“I think the end result of this impeachment trial is crystal clear to everybody,” he added. “Donald Trump will be acquitted, and every person in the Senate chamber understands there are not the votes to convict him.”

Friday’s presentation came after two days of arguments from House Democrats, who are acting as prosecutors in the case. Led by Jamie Raskin, a Democratic congressman from Maryland, their presentation included hundreds of Twitter messages, videos and speeches from the former president, as well as previously unseen security camera footage from inside the Capitol during the riot. 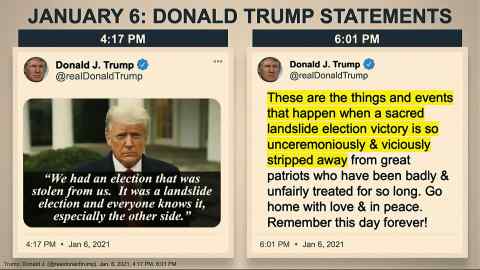 Several Republican senators praised the Democrats’ presentation. But a critical mass of Republicans is unlikely to vote to convict Trump, or bar him from holding future office, with a majority of them previously voting that the trial is not constitutional.

Under the constitution, two-thirds of the US Senate would need to find Trump guilty in order for him to be convicted — something that would require the support of 17 Republican lawmakers given the upper chamber of Congress is currently split, 50-50, between Republicans and Democrats. Trump could then be banned from holding future office with a simple majority vote.

Joe Biden told reporters at the White House on Friday morning that he was “anxious” to see how Republicans voted in the trial.

“I’m just anxious to see what my Republican friends do, if they stand up,” he said. Biden, who was sworn in as president on January 20, spent several decades in the Senate before serving as Barack Obama’s vice-president.

Last month, more than 150 legal scholars, including the founder of the conservative legal group the Federalist Society and several of its members, wrote an open letter arguing the constitution allowed for the trials of both current and former public officials.

Trump’s impeachment has exposed long-simmering tensions within the Republican party and underscored the grip the former president retains on the party’s voters and elected lawmakers.

In an interview published on Friday in Politico Magazine, Nikki Haley, the former Republican governor of South Carolina who is widely seen as a potential candidate for president in 2024, said impeachment proceedings were a “waste of time” but insisted Trump would not be running for office again.

“I don’t think he’s going to be in the picture,” she said in the interview, which was conducted on January 12, one day before Trump was impeached by the House. “I don’t think he can. He’s fallen so far.”