Trump turns up heat on Senate to approve bigger stimulus Donald Trump challenged Senate Republicans to approve an increase to US stimulus cheques to $2,000 a person, throwing the upper chamber of Congress into turmoil as leaders of president’s party scrambled to set the course for his final days in office.

The appeal from Mr Trump in a series of tweets on Tuesday was met with a muddied response from Mitch McConnell, the Senate majority leader, as Republicans in the upper chamber were divided on the merits of a larger economic relief package.

Mr McConnell initially blocked a quick vote on raising direct payments from the $600-a-person level set in the $900bn stimulus bill enacted on Sunday to the $2,000-a-person transfers demanded by Mr Trump and approved by the Democratic-controlled House of Representatives.

But Mr McConnell then introduced legislation that would allow for higher payments in conjunction with other measures opposed by Democrats, including a repeal of liability protections for online content for technology companies and the establishment of a commission to study election fraud.

The effort was immediately rejected by Chuck Schumer, the top Democrat in the Senate. “It will not pass the House and cannot become law — any move like this by Senator McConnell would a blatant attempt to deprive Americans of a $2,000 survival cheque,” he said.

Mr McConnell has faced heavy pressure from the White House to beef up the stimulus package with larger cheques — with Mr Trump repeatedly urging him to do so on Tuesday.

“Unless Republicans have a death wish, and it is also the right thing to do, they must approve the $2,000 payments ASAP. $600 is not enough!” Mr Trump wrote on Twitter.

The larger direct payments would increase the cost of the stimulus bill by $464bn, according to the Joint Committee on Taxation. Bigger cheques could also support income and consumption as the US grapples with a spreading coronavirus outbreak.

Steven Mnuchin, the Treasury secretary, said the $600 payments would start to go out from Tuesday night by direct deposit for eligible recipients, continuing into next week.

“@realdonaldtrump is right — I support this push for $2,000 in direct relief for the American people,” Mr Perdue wrote on Twitter.

When asked if she supported the $2,000 payments, Ms Loeffler told Fox News: “I’ve stood by the president 100 per cent of the time. I’m proud to do that. And I’ve said absolutely, we need to get relief to Americans now and I will support that.” 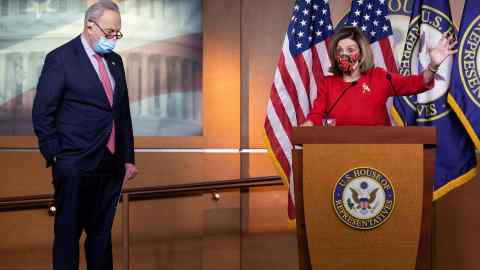 Democrats, who strongly support bigger stimulus cheques, have urged Mr Trump to be more forceful with his party.

“If he actually does his job now and convinces Republicans to vote for larger direct payments, then bigger cheques could start going out next week,” Jack Reed, a Democratic senator from Rhode Island, said on Monday, adding: “It’s not enough for President Trump to just sit in his Mar-a-Lago estate and send a few tweets.”

As he turned up the heat on Mr McConnell over stimulus, Mr Trump also attacked the Republican leadership in the Senate for their intention to override his veto of a $740bn defence spending bill. The House voted to overrule the president’s veto on Monday, with a vote in the Senate along the same lines expected in the coming days.

Mr Trump rejected the defence bill in an attempt to persuade Congress to repeal legislation granting technology companies immunity from lawsuits over the content posted on their platforms, and because of provisions restricting his ability to reduce US troop levels in Europe and Asia. He also criticised a measure requiring the Pentagon to rename military bases named after confederate generals.

In another jab at Mr McConnell on Twitter, Mr Trump said: “Weak and tired Republican ‘leadership’ will allow the bad defence bill to pass.” The president added: “Negotiate a better bill, or get better leaders, now!”

But Mr McConnell vowed to plough ahead with plans to override the president’s veto of the defence bill.