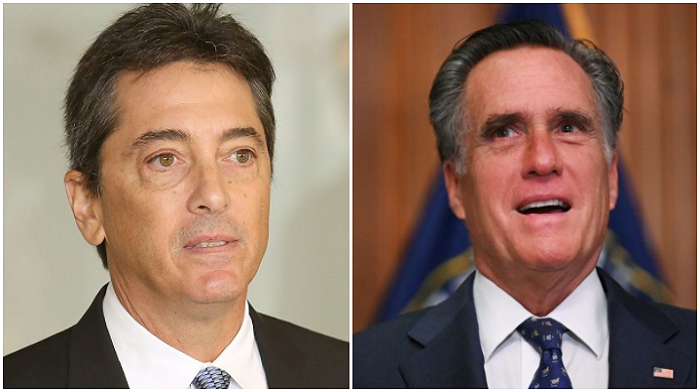 Scott Baio, a Trump-supporting actor, threatened to move to Utah and run against Mitt Romney in an effort to “unseat” the Republican senator.

Baio, best known for his role as Chachi, cousin of ‘The Fonz’ in the late-70s to early-80s sitcom Happy Days, took issue with Romney’s latest criticism of the President.

The actor also alleged that Romney’s campaign kept a $2,600 contribution from his wife for a fundraiser in Beverly Hills that was canceled.

“My wife is still waiting for her $2,600 refund,” he claimed. “Remember your wife canceled that Beverly Hills political luncheon fundraiser? But your campaign kept the money.”

Hey @MittRomney, beautiful golf courses in Utah……maybe I’ll move there, play a few rounds and unseat you. P.S. My wife is still waiting for her $2600 refund. Remember your wife canceled that Beverly Hills political luncheon fundraiser? But your campaign kept the money. https://t.co/ZMBZVZw3zZ

Baio was responding directly to a statement by the Utah Senator calling President Trump’s attempts to contest the election “undemocratic.”

“Having failed to make even a plausible case of widespread fraud or conspiracy before any court of law, the President has now resorted to overt pressure on state and local officials to subvert the will of the people and overturn the election,” Romney said.

“It is difficult to imagine a worse, more undemocratic action by a sitting American President.”

It’s actually pretty easy to remember since Trump’s predecessor, Barack Obama, was known for his undemocratic efforts to stifle the media and drone Americans without justification, to name a couple.

Then, of course, there were the undemocratic attempts to subvert the will of the people in 2016 by creating a false Russia collusion narrative and spying on Trump’s transition team.

Perhaps Mitt forgot all of that.

RELATED: Poll Shows Over Half of Republicans Believe The Election Was ‘Rigged’ And Trump ‘Rightfully Won’

Baio’s Past Support of Romney

Like many Republicans, Baio has seen a once-promising politician in Romney fade into a wishy-washy, flip-flopping caricature of himself since Trump took office.

The actor once endorsed Romney and donated $12,500 to the Republican National Committee in 2012, according to Politico.

But in 2016, he, like many conservatives, had seen enough of Republicans In Name Only (RINOs) like Romney and stood firmly behind the President.

“I want him, as any one person can do, is to go into Washington and blow it up,” Baio said. “I’m fed up, I’m done with them, I’m done with the Republicans, they’d lied and conned and BSed me for a very long time now.”

@ScottBaio Hey! You go to Utah, I’ll head to Arizona. We can snag two blue seats and make them red. https://t.co/0SGyr7xVds

Trump last week slammed Romney as a “RINO” and shared a tweet suggesting the senator Had “lost his mind.”