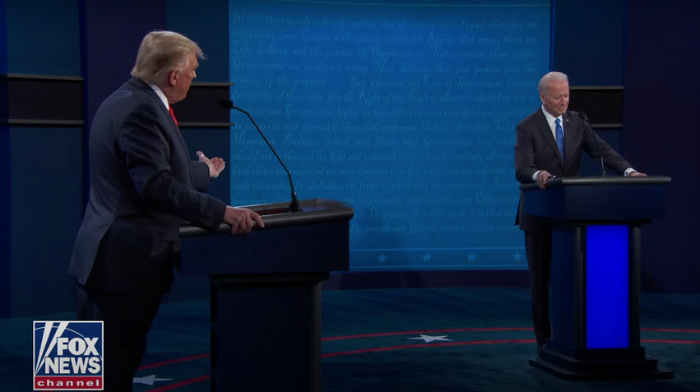 During their final presidential debate on Thursday, Donald Trump went toe-to-toe with Joe Biden about coronavirus saying that Americans will have to learn to live safely with COVID-19 while also rejecting an indefinite lockdown of the economy and the country.

“We’re learning to live with it; we have no choice,” President Trump said of the coronavirus. “We cannot lock ourselves up in a basement like Joe does.”

President Trump responds “we can’t close our nation… we can’t lock ourselves up in a basement like Joe does”#Debates2020 https://t.co/8FlGMGJgcS pic.twitter.com/yW5lhbuevP

RELATED: Trump Calls Out Obama During Nevada Rally – His Supporters Chant ‘Lock Him Up’

President Trump: ‘We cannot close our nation or we will not have a nation’

“He has the ability to lock himself up,” Trump added. “I don’t know, he’s obviously made a lot of money someplace.”

President Trump noted that it was important to get the economy going again, including Americans going back to work and schools reopening or staying open.

“We have to open our school and we cannot close our nation or we will not have a nation,” he said.

Trump noted that 99.9 percent of young Americans who get COVID-19 do recover, and a whopping 99 percent of all Americans recover.

Data has shown that children are less likely than adults to contract COVID-19 and that their symptoms are generally less “serious”. Data posted by the CDC relating to cases and mortality in children seems to support Trump’s statement:

Data aside, some found Trump’s basement comment to be a showstopper.

Trump on Joe Biden’s coronavirus debate response: ‘He has this thing about living in a basement’

Then Trump circled back to Biden and his basement.

“He has this thing about living in a basement. People can’t do that,” Trump said about Biden.

The president acknowledges meetings carry risk during a pandemic, but he stands by his decision to continue carrying out his presidential duties and be there for the American people.

Trump then said he could not lock himself up in a basement even if he wanted to, especially in the White House.

“This is dangerous, and you catch it, and I caught it,” Trump said.

“I learned a lot,” he added. “Great doctors, great hospitals — and now I recovered.”

COVID-19 and President Trump’s response to it will loom large in this election.

Screw the polls. Donald Trump is a rock star and Joe Biden can’t get out of his basement. Hiding with Hunter probably… pic.twitter.com/5oV3IxD2bI

RELATED: Trump Campaign Homes In On Basement Biden And Is Closing Gap In Polls

Did this debate – particularly the candidates coronavirus answers – change your mind?

There was much debate over who won following last night’s presidential debate.

Many applauded President Trump for his restraint while others praised Joe Biden for showing his “humanity”.

Consensus seemed to follow party lines but that doesn’t tell us where any undecided voters might fall.

Did Donald Trump sway more voters in his direction Thursday night or did Joe Biden?

Did neither and we are pretty much where we were pre-debate?