The US Senate has blocked the nomination of Judy Shelton for a seat on the Federal Reserve board of governors, in a defeat for President Donald Trump, who had stirred controversy by tapping a fierce critic of the US central bank for the job.

Lawmakers in the upper chamber of Congress stopped her nomination from advancing to a final vote in a 50-47 procedural vote on Tuesday.

The outcome of the vote remained uncertain up until it was taken. Ms Shelton’s defeat was sealed after the Republican majority championing her bid suffered several defections and absences within its ranks on top of unanimous opposition from Democratic senators, including from Kamala Harris, the US vice-president-elect, who was in Washington to cast her vote.

On the Republican side, Susan Collins, the Republican senator from Maine, and Mitt Romney, from Utah, voted against Ms Shelton’s nomination. Chuck Grassley of Iowa and Rick Scott of Florida could not attend because they were quarantining after being exposed to coronavirus. Mr Grassley, 87, later tweeted that he had tested positive for the virus.

Lamar Alexander, the senator from Tennessee, also opposed the nomination but did not vote. Mitch McConnell, the Senate majority leader, voted against Ms Shelton for procedural reasons, so that he might still be able to bring up her nomination again.

That was a good result for the country. Especially in a pandemic. Not feeling up to the gold standard these days

Ms Shelton’s nomination had been controversial from the start because of her past advocacy for a return to the gold standard and her attacks on the Fed’s role in setting monetary policy, which placed her far outside the mainstream of US economic policymaking.

Assuming Mr McConnell does not successfully revive her nomination, the vote on Tuesday will deny Mr Trump the opportunity to place a loyalist on the Fed’s board before he leaves office in January.

Mr Trump has also nominated Christopher Waller, an economist at the Federal Reserve Bank of Saint Louis, to fill a second vacancy on the board of the US central bank. Mr Waller’s nomination is far less contentious and could well be confirmed by the end of the year.

If Ms Shelton’s nomination had succeeded, she would have held a seat on the Fed board until 2024. While the ability of a single Fed governor to shape or disrupt policy is limited, she still could have been a thorn in the side of Jay Powell, the Fed chairman, as he tried to set monetary policy and implement the central bank’s regulatory mandate.

“Judy Shelton is not only unqualified for the job, she is a threat to our economic recovery and doesn’t belong on the Fed,” Chuck Schumer, the New York senator and Democratic leader in the Senate, said after the vote. “And thanks to the bipartisan coalition that opposed her nomination today, she isn’t any closer to being there.” 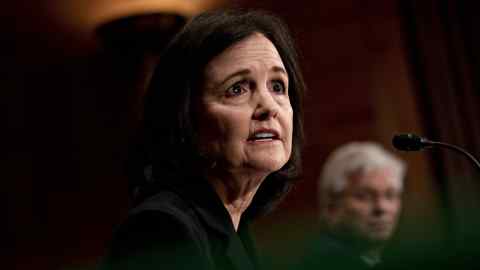 Amy Klobuchar, the Democratic senator from Minnesota, wrote on Twitter after the vote: “Federal Reserve nominee Shelton just went down. That was a good result for the country. Especially in a pandemic. Not feeling up to the gold standard these days.”

Mr Trump has had a dismal record in trying to fill nominations at the Fed. Stephen Moore, Nellie Liang, the late Herman Cain and the late Marvin Goodfriend were all tapped by the president to be governors at the US central bank but never made it to the finish line.

Assuming Mr Waller is confirmed, Mr Biden would have the chance to fill at least one vacancy once he takes office.

Mr McConnell could still theoretically bring up Ms Shelton’s nomination again before the end of the year, but the math will become even more difficult for Republicans. Mark Kelly, a Democrat, will replace Martha McSally, a Republican, in one of Arizona’s Senate seats at the end of November.