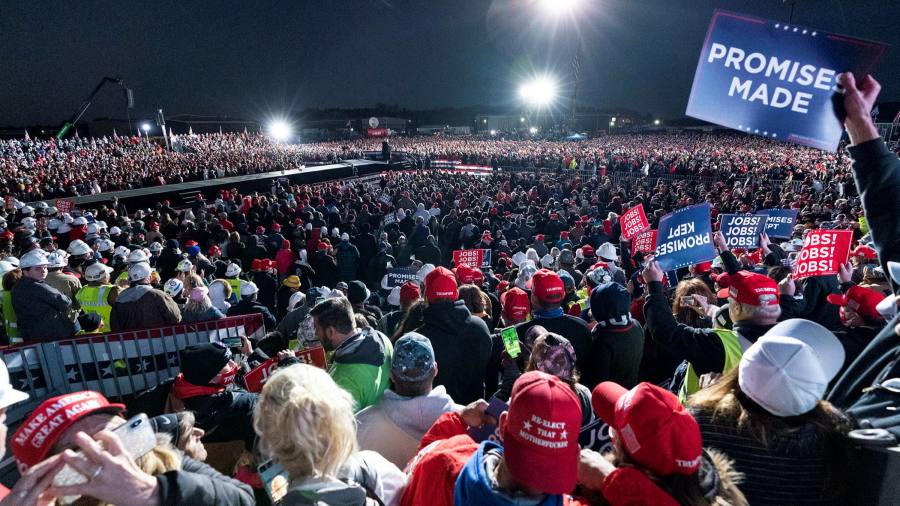 Donald Trump delivered a grim message to Pennsylvania voters on Saturday as he kicked off a final blitz of swing state rallies — his last chance to hold on to the White House.

The president again raised the prospect of electoral fraud in the key swing state, as well as nationally, and warned that Democratic rival Joe Biden would trap the country in an “endless nightmare of lockdowns”.

Mr Trump and Mr Biden are making a final play for states Republicans carried in 2016 ahead of Tuesday’s election. The campaign has been dominated by the issue of the coronavirus pandemic with the total number of infections passing 9m in the US.

The former vice-president on Saturday campaigned with ex-president Barack Obama in Michigan, while Mr Trump spent the day traversing Pennsylvania — a state his campaign sees as key to his political survival.

As of Saturday, over 90m ballots had already been cast in the election, according to US Elections Project, a database compiled by Michael McDonald, a professor at the University of Florida. That is 65 per cent of the total votes cast in 2016, suggesting that 2020 turnout will eclipse that of four years ago. Early voting has shattered records as the coronavirus pandemic continues to ravage the country.

“We’re going to be waiting. November 3rd is going to come and go, and we’re not going to know, and you’re going to have bedlam in our country,” Mr Trump said in Newtown, Bucks County.

At a subsequent stop in Reading, Pennsylvania, Mr Trump warned the state’s Democratic governor: “don’t cheat on the ballots”.

“The only way we’re going to lose this state [is if] somebody’s going to play games.”

At both rallies Mr Trump predicted that he would win the election in a “red wave”. But polls show him trailing Mr Biden nationally and in key swing states, including Pennsylvania. The president was due to make four campaign stops in the state, while Mr Biden will spend the day there on Sunday and Monday.

According to a Financial Times analysis of polling data from RealClearPolitics, Mr Trump is trailing Mr Biden in Pennsylvania by more than 5 points after winning the state by just over 44,000 votes four years ago. Nationally, Mr Biden leads 51.8 per cent to 43.1 per cent.

In a joint appearance by Mr Biden and Mr Obama in Flint, Michigan, the former president seized on Mr Trump’s remark on Friday that doctors were paid extra for declaring that someone had died from Covid-19.

“He cannot fathom the notion that somebody would risk their lives to save others without trying to make a buck,” Mr Obama said.

Mr Biden said Mr Trump had “waved the white flag of surrender to this virus”.

The Democrats have focused the final days of their campaign on what they claim is Mr Trump’s disastrous response to Covid, as the number of cases spike across the country, particularly in the Midwest.

The number of new infections rose by 90,000 on Saturday, down from the record increase of 97,000 on Friday. The total number of cases since the start of the pandemic is more than 9m, according to Covid Tracking Project.

Midwestern states led the way, comprising more than 40 per cent of the latest batch of cases. Eleven of the 12 states that make up the region had seven-day averages that hit a record high on Saturday, while eight of them reported their highest level of coronavirus hospitalisations.

The US has recorded its three biggest single-day jumps in cases in the past three days. The weekly total stands at 555,000 infections, a record for a seven-day period since the disease started spreading across the country in March, according to the Covid Tracking Project data.

Mr Biden has criticised the president for holding mass campaign rallies, many of them without social distancing or the widespread use of masks, in defiance of medical advice. His campaign on Saturday circulated the results of a Stanford University study that estimated that just 18 of Mr Trump’s many rallies between June and September had resulted in 30,000 extra Covid-19 cases, and 700 deaths.

Mr Trump said on Saturday that all Mr Biden talked about was “Covid, Covid, Covid.”

At his rally in Bucks County, the president said his administration had not done a good job marketing its efforts in the pandemic, and warned that Mr Biden would shut down the country and economy, were he to be elected.