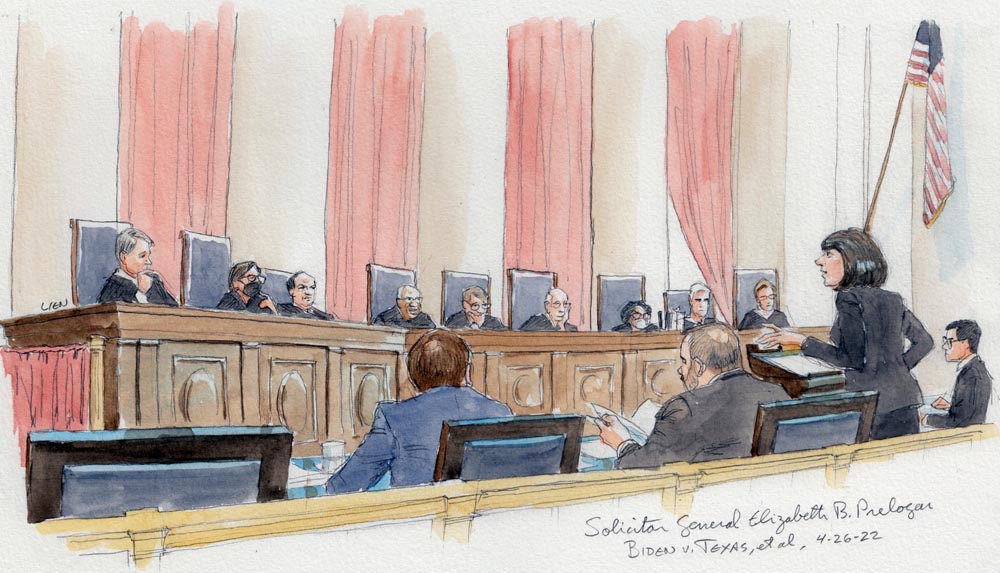 Some justices suggested that the decision to end the policy was inconsistent with federal immigration law, and they expressed doubt that Congress intended to allow the release of large numbers of asylum seekers into the United States. But on the other hand, members of the court – including some conservative justices – challenged the idea that Texas and Missouri could ask a federal court to require the Biden administration to maintain the program, particularly when doing so requires the cooperation of the Mexican government.

Representing the Biden administration, U.S. Solicitor General Elizabeth Prelogar told the justices that Homeland Security Secretary Alejandro Mayorkas had opted to end the MPP after determining that the program’s benefits “were outweighed by its domestic, humanitarian, and foreign policy costs.” It was, Prelogar stressed, an exercise of “his statutory discretion to make a policy judgment.”

By contrast, Texas Solicitor General Judd Stone emphasized that under federal immigration law, the government has three options for asylum seekers who arrive at the U.S. border. It can decide on a case-by-case basis to temporarily allow them into the United States, it can return them to Mexico or Canada if they have arrived by land, or it can hold them in a U.S. detention center while they wait for a hearing. The Biden administration has to choose one of those options, Stone stressed, and ending MPP would mean that the Biden administration is violating federal law. 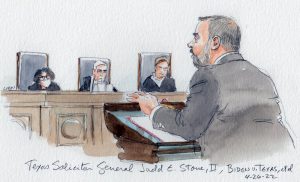 Several justices, including Justice Clarence Thomas, focused on the statutory scheme. Texas and Missouri, he noted, argue that federal immigration law – by providing that DHS “shall detain” noncitizens – creates a presumption of detention, subject to the other two options. Congress’ use of “shall,” Thomas suggested, eliminates the possibility of any discretion for DHS: It has to choose one of the options.

Justice Samuel Alito echoed this line of thinking, noting that in another case involving whether immigrants who have been detained have the right to periodic bond hearings the federal government had argued that the phrase “shall be detained” meant that detention was mandatory.

Prelogar pushed back, noting that “DHS does not have sufficient capacity to detain everyone who could be subject to detention.” Moreover, she added, in the provision that specifically deals with the return of asylum seekers to Mexico or Canada, Congress indicated that DHS “may return” noncitizens. The law, she told the justices, “didn’t create the kind of mandate that” Texas and Missouri “are now reading into the statute.”

Justice Brett Kavanaugh also expressed skepticism about the government’s contention that, because it cannot detain all asylum seekers who arrive at the border, it therefore has discretion to decide how to deal with the many people it cannot detain. Is there any indication, he asked Prelogar, that if there wasn’t enough space to hold them, Congress expected hundreds of thousands of people to be released into the United States without being legally admitted?

Chief Justice John Roberts acknowledged that he was “sympathetic” to the Biden administration’s inability to detain everyone who qualifies. But, he added, “what are we supposed to do? It’s still our job to say what the law is.” Roberts was even more forceful a few minutes later, telling Prelogar, “If you have a situation where you’re stuck because there’s no way you can comply with the law and deal with the problem there, I guess I’m just wondering why that’s our problem?”

Prelogar urged the court to focus on what she characterized as the “central issue in this case”: the proper interpretation of the provision of federal immigration law indicating that DHS “may return” asylum seekers who arrive by land to Mexico or Canada to wait for a hearing. “And none of those concerns about detention and release could in any sense justify transforming that position, contrary to Congress’ plain language, the ‘may return’ language, with all of the consequences that would have for our foreign relations,” she concluded.

Stone also met with resistance – including from some of the same justices – to the states’ interpretation of the statutory scheme. Broaching a point made by the Biden administration in its brief, Thomas asked Stone whether, on the states’ interpretation of federal immigration law, any presidential administration – Republican or Democratic – had complied with the statutory scheme requiring DHS to choose between the three options for asylum seekers. When Stone responded that none had complied, Thomas suggested that it would “be odd for Congress to leave in place a statute that would appear to be impossible to comply with.”

Justice Sonia Sotomayor chimed in, contending that “when Congress knows that something’s happening and it responds or it fails to respond, that tells us something about its intent.” In this case, she observed, the “shall detain” language has been in effect for over a century without any administration attempting “to detain every single illegal immigrant.” Perhaps, she suggested, when Congress neither provided the resources to detain everyone who qualifies nor passed legislation to require everyone to be detained even without the resources, no matter how “inhumane,” “we should accept what the practices have been through generations of presidents.”

Justice Amy Coney Barrett signaled her agreement. If the Biden administration is correct about what “significant public benefit” means, and the need to prioritize spaces in detention centers, she said to Stone, “you lose, right?”

But the argument also focused on the bigger picture – and in particular some justices’ concerns about federal courts overstepping their boundaries and interfering in foreign relations and policy decisions by the executive branch.

Roberts asked Stone to address Prelogar’s contention that reinstating MPP would only “send a limited number of people back to Mexico,” while at the same time requiring the U.S. government to coordinate with the Mexican government. “What good,” Roberts asked, “do you think will come from a requirement that the government keep MPP in place?” When Stone responded that it would result in fewer violations of federal immigration law, Roberts shot back, “I think it’s a bit much for Texas to substitute itself for the secretary and say that you may want to terminate this, but you have to keep it because it will reduce to a slight extent your violations of the law.”

Stone sought to portray the claims that Texas and Missouri have brought as “garden-variety” claims that the federal government has not complied with the laws governing administrative agencies. But Justice Elena Kagan wasn’t buying it. It does not, she admonished him, “really seem like a garden-variety” claim “to basically tell the executive how to implement its foreign and immigration policy. And that’s what this does,” she contended. “You’re putting the secretary’s immigration decisions in the hands of Mexico,” because the United States can only comply with the lower courts’ orders if Mexico agrees to cooperate.

Prelogar tried to hammer this point home in her rebuttal, reiterating the “extraordinary nature of the district court’s injunction,” – “particularly,” she said, “with respect to its effects on foreign relations.” Under the district court’s order, she explained, the Biden administration needs “to get Mexico’s consent to operate” MPP, giving the other country “an important point of leverage.” Returning asylum seekers to Mexico under the MPP, she told the justices, requires a “massive cross-border program,” with everything from housing and access to lawyers to security and transportation. “The idea,” she concluded, “that there is a single district court in Texas that is mandating those results … shows that something has powerfully gone awry here. This is not how our constitutional structure is supposed to operate. And this is not the statute that Congress drafted.”

We’ll know by summer whether there are five justices who agree with her.