Talks on an EU-UK trade deal hit a major obstacle on Thursday evening as British officials accused France of making new demands at the eleventh hour, leaving an agreement hanging in the balance.

Emmanuel Macron, France’s president, wants to preserve a substantial chunk of existing fishing rights for the French fleet in British waters after Brexit and is also insisting on a strict UK state-aid regime to avoid what Paris sees as unfair competition.

Mr Macron’s tough stance has alarmed Boris Johnson, UK prime minister, and officials from both sides admit that any prospect of a deal by the end of the weekend has now disappeared.

A senior British government official said: “At the eleventh hour, the EU is bringing new elements into the negotiation. A breakthrough is still possible in the next few days but that prospect is receding.”

An EU official rebutted the idea that the bloc was making new demands but did not deny that talks had run into difficulties.

Mr Johnson’s allies believe the tough EU position is being driven by Mr Macron, whose country is among those most directly affected by Brexit. 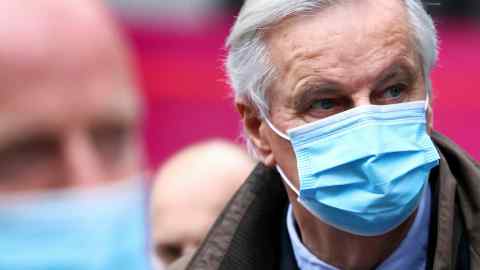 Hopes remain on both sides that the last-minute bust-up can be resolved and a deal be reached by next Monday or Tuesday, ahead of a European Council meeting in Brussels starting on Thursday.

But Michel Barnier, EU chief negotiator, is still searching for ways to satisfy Paris and other worried EU capitals that their businesses will be adequately protected from unfair British competition and their fishermen’s rights safeguarded.

The concerned group also includes the Netherlands, Denmark and Belgium, whose economies are closely intertwined with Britain and whose fishing fleets rely on its waters.

EU diplomats said it was possible Mr Barnier would debrief EU ambassadors in Brussels on Friday but that this was still undecided. The situation is “still quite dynamic” said one diplomat.

Mr Barnier, who has been in London for talks this week, briefed ambassadors via video link on Wednesday that the bloc was still seeking to hammer out provisions with the UK that would prevent either side gaining an unfair competitive advantage through state aid.

The chief negotiator said any deal should provide “definitions, principles and binding, workable and operational enforcement”, said one of the participants at the closed-door meeting.

Governments’ concerns have been heightened by the fact Brussels has failed to overcome UK opposition to French-backed proposals for the level playing field.

These included plans to require Britain to create a regulator with powers to police state aid to companies even before the money is handed out, and demands for “ratchet clauses” that would force both sides to have environmental and labour regulations that evolve in a similar way over time.

France warned Mr Barnier at Wednesday’s ambassadors meeting that any future-relationship deal must include “adequate, proportional remedies” and crucially also the right for European companies to haul the UK government before the British courts if it violated its commitments on level playing fields.

The issue of how to enforce any deal is all the more sensitive because of the UK government’s repeated threats to violate its divorce treaty with the EU.

Stefaan De Rynck, a senior member of Mr Barnier’s team, cautioned on Thursday that “significant divergences remain” and that the outcome of talks is uncertain. “My feeling is that both sides are committed to finding a deal,” he said at a European Policy Centre event.

In a show of support for France’s fishing fleet on Thursday, prime minister Jean Castex visited Boulogne-sur-Mer, on the northern coast, to promise that the country would not accept a deal where the sector was sacrificed as a “bargaining chip”.

He also pledged substantial financial support to a sector hit hard by the economic fallout from Covid-19.