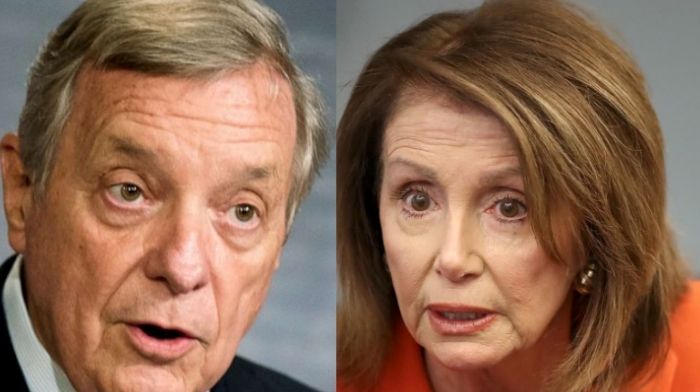 A top Democratic senator turned on Speaker of the House Nancy Pelosi (D-CA) on Monday, calling for her go give up her demands for a massive multitrillion-dollar coronavirus relief package and back the $748 billion bipartisan measure.

“There is no excuse for the speaker or the leader, you’ve got to give us a vote,” said Senate Minority Whip Dick Durbin, the number two Democrat in the Senate.

“A more controversial $160 billion add-on would include aid for state and local governments and a liability shield for businesses against COVID-related lawsuits — the two thorniest issues that have plagued negotiations for months,” the publication continued.

A group of bipartisan lawmakers all said that they support the bill, and they called on leaders to bring it to the House floor for a vote this week.

Pelosi and Senate Minority Leader Chuck Schumer (D-NY) have not yet spoken publicly about this bill, but they suggested last week that they would be willing to support a deal worth less than the $2.2 trillion that they claimed was needed for months.

Durbin went on to add that enough is enough, and that the American people need a coronavirus relief aid package as soon as possible.

“Weeks have passed, hours and hours of Zoom calls and we’ve reached this point,” Durbin said. “It feels good, it feels like legislating, it feels like why we were elected.”

RELATED: Meet The Republican Woman Who Gave Pelosi What’s Being Described As Her ‘Most Bitter Loss’

Sen. Chris Coons (D-DE) agreed with this, saying that lawmakers “cannot afford to wait any longer to act.”

“This should not be Congress’ last COVID relief bill, but it is a strong compromise that deserves support from both Republicans and Democrats in the Senate,” said Coons. “We cannot leave for the holidays without getting relief to those Americans who need it.”

This piece was written by James Samson on December 15, 2020. It originally appeared in LifeZette and is used by permission.