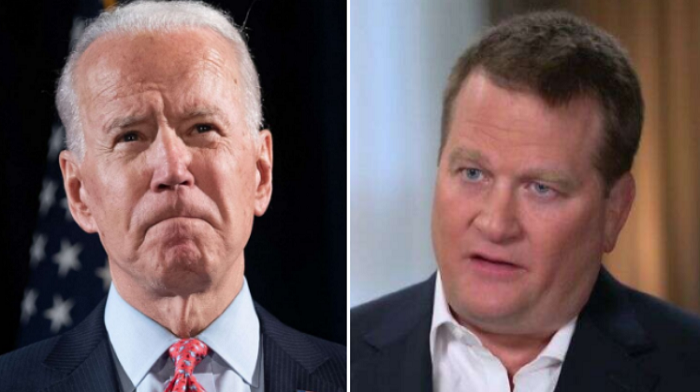 Tony Bobulinski, a former business associate of Hunter Biden, suggested that Joe Biden is, in fact, “the big guy,” mentioned in the Hunter Biden scandal.

Bobulinski also claimed that Biden did discuss business dealing with his son, and suggested the Democrat nominee for President is compromised by the Chinese.

In a wide-ranging interview with Fox News host Tucker Carlson, Bobulinski slammed the Biden family for downplaying his concerns about Joe Biden’s alleged ties to a joint venture with a Chinese energy firm.

An email obtained by Fox News weeks ago appeared to outline a payout for Biden as part of a deal with the firm.

It included a proposed equity split in those messages references “20” for “H” and “10 held by H for the big guy?”

Bobulinski, in the interview, insists that is a reference to the former vice president.

“I one thousand percent sit here and know that ‘the big guy’ is referencing Joe Biden,” he told Tucker.

Bobulinski’s claims have not been verified. Though he has provided emails, recordings, phone texts, and the like, context has not been confirmed.

RELATED: Hillary Clinton: Four More Years Of Trump Would Literally ‘Make Me Sick To My Stomach’

In an interview with ‘60 Minutes,’ Biden claimed he never discussed business dealing with his son, Hunter.

Bobulinksi alleges that this is a “blatant lie” and that the Democrat presidential nominee even went as far as to give “an emphatic no” to “putting proper governance in place” for his family’s business.

Tony Bobulinski: Joe Biden gave “an emphatic no” to “putting proper governance in place” for business with Hunterhttps://t.co/GoF5zaTock pic.twitter.com/FuyIi6bTZf

When he brought up concerns about Joe Biden’s ties, Bobulinski claims they were shrugged off.

“I remember saying [to Jim Biden, Joe’s brother], ‘How are you guys getting away with this?’ ‘Aren’t you concerned?’” he told Carlson.

Hunter Biden’s ex-business partner Tony Bobulinski: “I remember looking at Jim Biden and saying how are you guys getting away with this? Aren’t you concerned? He looked at me, and he laughed a little bit, and said ‘PLAUSIBLE DENIABILITY.’” pic.twitter.com/IxbND1IbWV

Bobulinski believes that Joe Biden is compromised by the Chinese.

“I think Joe Biden and the Biden family are compromised,” he said.

“I just don’t see given the history here and the facts, how Joe can’t be influenced in some matter [by the Chinese] based on the history that they have here with CEFC.”

“So as a citizen and an American taxpayer, I’m very, very concerned.”

Regarding Adam Schiff and Biden’s claims that these allegations of corruption are part of Russian disinformation, Bobulinski dismissed them out of hand.

“We know that this whole smear on Joe Biden comes from the Kremlin,” Schiff said on CNN. “That’s been clear for well over a year now that they’ve been pushing this false narrative about this vice president and his son.”

Bobulinski claims that is false.

Tony Bobulinski: “all the facts are extremely well documented…the American people can read these texts, listen to the recording that you just played, read the legal documents”https://t.co/Kg7UdRWsEI pic.twitter.com/pFqo5qXv2U

Meanwhile, the mainstream media refuses to cover the allegations. Which might be a statement unto itself.

Bobulisnki’s claims are just that – his own allegations, unsubstantiated thus far despite the emails and recordings.

The fact that the media has no interest in disproving them though, may speak volumes.

Says he’s “shocked” at media reaction, or lack thereof. Says it would be one thing if it were just his word against the Biden family, that would be one thing, but he’s provided so many reams of documents, texts, messages, and facts about meetings, who participated, etc.

“The Post, what they printed and put out there, is accurate,” Rogan advised.