Tens of thousands of people massed in Yangon and other cities in Myanmar for a second day on Sunday to protest against last week’s military coup, defying the junta’s attempt to choke off the spread of news and dissent by shutting down most of the country’s internet.

Internet access, after being blocked almost entirely on Saturday by order of General Min Aung Hlaing’s military government, had been partially restored by Sunday afternoon, according to protest participants and an overseas monitoring group.

NetBlocks, a non-governmental organisation that tracks disruptions and shutdowns on the worldwide web, said that after “flatlining” at just 14 per cent of ordinary levels earlier on Sunday, from 2pm local time connectivity had been partially restored, although social media websites remained blocked.

Livestream footage filmed by demonstrators in Yangon, Myanmar’s biggest city, showed large crowds of people converging in the downtown area, chanting “Democracy — our cause”, “Down with the military government”, and holding up three fingers in a salute popularised during neighbouring Thailand’s democracy protests last year.

Many were wearing red or carrying red flags of the ruling National League for Democracy that headed Aung San Suu Kyi’s government, which was toppled last week when the military arrested Myanmar’s leader and scores of other officials and seized power.

According to a live video and social media posts, shots were fired in the south-eastern town of Myawaddy, near the Thai border, as police sought to break up a protest.

The Assistance Association for Political Prisoners (Burma), a human rights organisation, said that as of Saturday 164 people had been detained since the February 1 coup and were under house arrest or in detention.

Sean Turnell, an Australian who served as a senior economic adviser to Aung San Suu Kyi was arrested on Saturday. A person with direct knowledge of the matter, who asked not to be named, said that Mr Turnell, a professor of economics at Macquarie University, was being held without charge for 15 to 30 days. 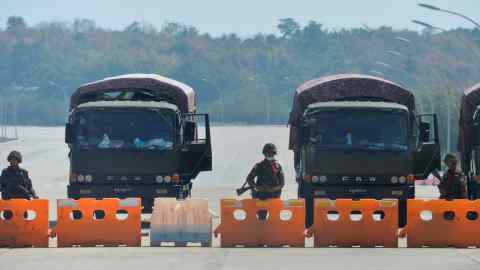 Myanmar’s coup, condemned by the US, EU and UN, has put telecoms and social media groups in an uncomfortable spot as the military orders them to cut off communications amid a growing protest movement and the Covid-19 pandemic.

Telenor, one of Myanmar’s four telecoms operators, said on Saturday that it and other mobile operators had been ordered by the ministry of transport and communications to temporarily shut down their data networks.

“Telenor Myanmar, as a local company, is bound by the local law and needs to handle this irregular and difficult situation,” Telenor said.

It said that voice and messaging services remained open.

Myanmar’s coup ended the country’s nine-year-old democratic transition and plunged one of Asia’s poorest nations into uncertainty at a time when it was starting to bring coronavirus under control.

The military’s internet shutdown, a tool it has used in the past to hide violent conflicts in the country’s western Rakhine and Chin states, came after resistance to the coup gathered force online and the toppled government took steps to conduct business as usual.

MPs organised a “virtual” parliamentary meeting on Friday and vowed “to fulfil their mandate without impediment”. In recent days, people have shared protest art mocking the generals, and renditions of Kabar Ma Kyay Bu, a protest anthem set to the tune of “Dust in the Wind” that was an anthem of the country’s 1988 uprising against military dictatorship.

A group of civil society groups in Myanmar circulated a letter criticising internet providers for obeying the shutdown order. “By complying with their directives, your companies are essentially legitimising the military’s authority, despite international condemnation of this very body.”