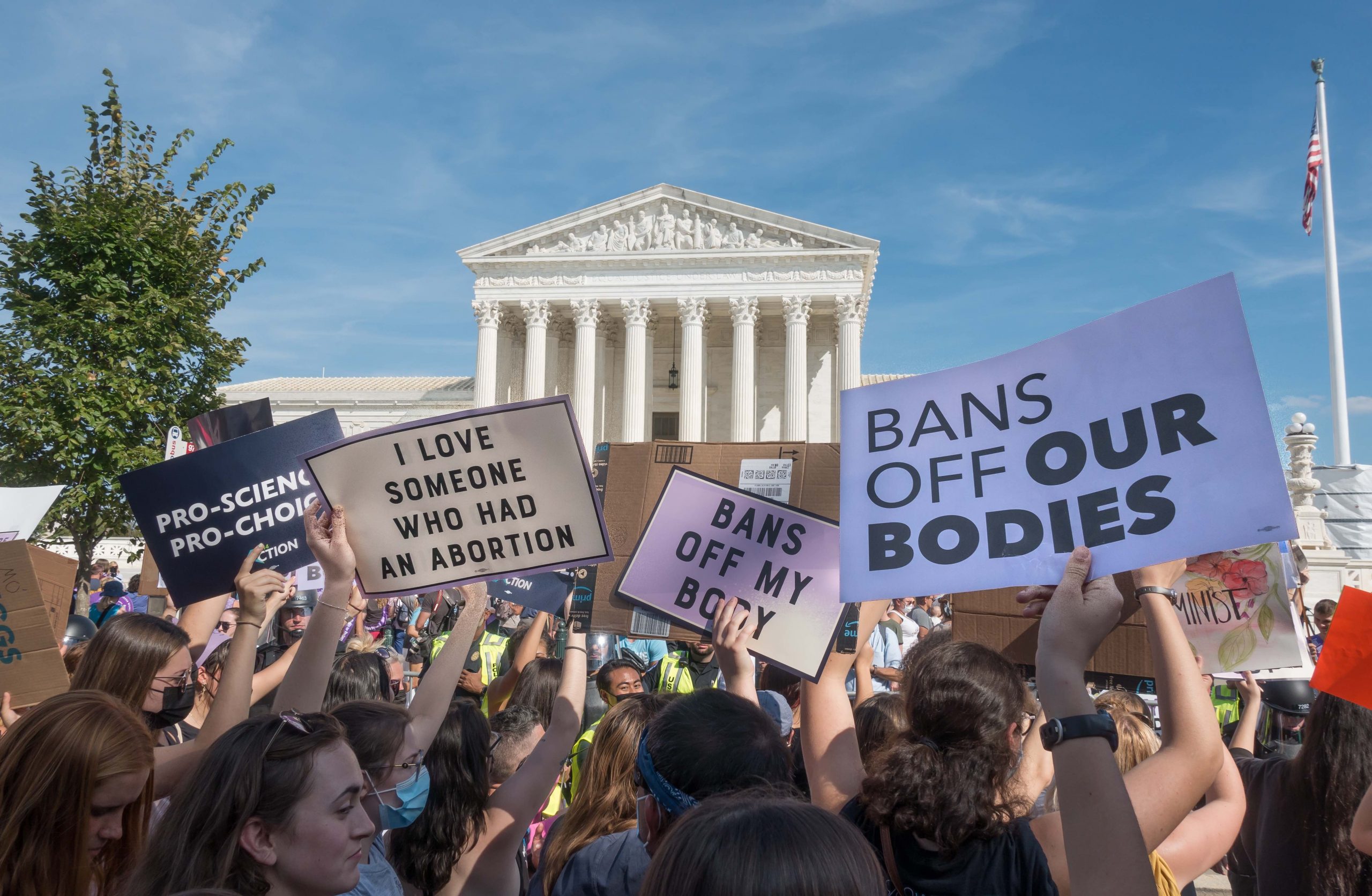 Supporters of abortion rights march in front of the Supreme Court during the Women’s March in Washington on Oct. 2, 2021. (Bob Korn via Shutterstock)

Two months ago, Texas put in place the most restrictive abortion law since the Supreme Court decided Roe v. Wade in 1973. The law, which prohibits almost all abortions in the state, has dramatically reduced access to the procedure. On Monday, the court will hear arguments in two challenges to the law — and though the cases may determine whether the law can remain in effect, they appear unlikely to resolve the future of the constitutional right to abortion first recognized in Roe. The answer to that question may come in a separate abortion case, involving Mississippi, scheduled for argument on Dec. 1.

Nevertheless, the two Texas cases — Whole Woman’s Health v. Jackson and United States v. Texas — are among the highest-profile cases in a term packed with controversial issues. Attesting to their high stakes, the justices will consider them in an extraordinary posture. They agreed to hear both cases before the court of appeals has fully weighed in, and they ordered an accelerated schedule for briefing and arguments not seen since the 2000 election litigation in Bush v. Gore.

Four lawyers will argue on Monday. They include Elizabeth Prelogar, the newly confirmed solicitor general for the Biden administration, and Jonathan Mitchell, the chief architect of the Texas law under review.

Origins of the Texas law

During his campaign for president in 2016, then-candidate Donald Trump pledged to appoint Supreme Court justices who would vote to overturn Roe and Planned Parenthood v. Casey, the 1992 decision that reaffirmed the right to abortion. In his four years in office, Trump put three justices — Neil Gorsuch, Brett Kavanaugh, and Amy Coney Barrett — on the court, guaranteeing a solid 6-3 conservative majority for the foreseeable future.

With a more conservative court in place, abortion foes pushed for new restrictions on abortion, sometimes with the express goal of challenging Roe and Casey. In addition to the Mississippi law before the court in December, several states passed laws that prohibit doctors from performing abortions once they can detect fetal cardiac activity, which begins to occur at roughly the sixth week of pregnancy — before many patients even know they are pregnant. But because Roe and Casey held that the Constitution protects the right to have an abortion before a fetus can live outside the womb — a benchmark, known as viability, that normally occurs around the 24th week of pregnancy — lower courts blocked the so-called “heartbeat” bans before they could take effect.

Enter the Texas law, known as S.B. 8, which was signed by Texas Gov. Greg Abbott in May. The law is largely the brainchild of Mitchell, a lawyer who served as a law clerk to the late Justice Antonin Scalia and as the solicitor general of Texas. Like the other “heartbeat” bans, S.B. 8 prohibits abortions starting around the sixth week of pregnancy. But unlike the other states’ laws, S.B. 8 delegates the sole power to enforce the law to private individuals, rather than state officials. The law allows anyone, including people who do not live in Texas, to bring a lawsuit in state court against anyone who performs an abortion or helps to make one possible. That means that someone who drives a patient to an abortion clinic or a family member who pays for the abortion could be sued under S.B. 8. A plaintiff in a successful lawsuit can receive at least $10,000 in damages, along with costs and attorney’s fees.

For Mitchell and other supporters of S.B. 8, the law’s unusual enforcement scheme is a feature, not a bug. By stripping the state of any role in enforcing the law, and instead outsourcing enforcement to private individuals, S.B. 8’s supporters hoped to make it harder to challenge the constitutionality of the ban in court, particularly before the law went into effect on Sept. 1. And by creating such broad liability, with the potential for hefty damages, the law’s proponents also wanted to deter virtually all abortions – even those that would occur before the sixth week of pregnancy.

The history of the two cases that are now before the court is both complicated and intertwined. The first case, Whole Woman’s Health v. Jackson, was filed in federal court in July by a group of abortion providers. They sued a state judge and a county court clerk, seeking an order from the federal court barring all state judges and all county clerks from docketing or presiding over any lawsuits filed under S.B. 8. They also sued several state officials who they alleged had an indirect role in enforcing some of S.B. 8’s provisions. And they sued Mark Dickson, an anti-abortion activist who the providers believed would be likely to file an S.B. 8 lawsuit.

The judge and the county clerk asked the district judge to dismiss the claims against them, arguing that they were entitled to sovereign immunity and that the providers lacked a legal right to sue, known as standing. When the district judge denied that request, the officials appealed to the U.S. Court of Appeals for the 5th Circuit, which put all of the proceedings in the district court — including a hearing on whether to block enforcement of S.B. 8 — on hold.

The providers went to the Supreme Court in late August, asking the justices to step in and put the law on hold while their challenge was litigated in the lower courts. But in a late-night order issued nearly 24 hours after S.B. 8 went into effect, a closely divided court declined to do so. In a one-paragraph, unsigned order, the majority acknowledged that the providers had “raised serious questions” about whether S.B. 8 is constitutional. But that wasn’t enough to block the law at this stage, the majority emphasized, because of the “complex and novel” questions created by the law’s enforcement mechanism — in particular, whether the individual officials whom the providers had named as defendants could be sued at all.

Four justices dissented from the decision, including Chief Justice John Roberts. Addressing the state officials’ argument that they do not enforce S.B. 8, so that a court cannot order them not to enforce it, Roberts explained that he would have put the law on hold “so that the courts may consider whether a state can avoid responsibility for its laws in such a manner.”

Justice Sonia Sotomayor described the court’s decision not to block the law as “stunning.” “Presented with an application to enjoin a flagrantly unconstitutional law engineered to prohibit women from exercising their constitutional rights and evade judicial scrutiny, a majority of Justices have opted to bury their heads in the sand,” she wrote.

The court’s refusal to intervene on an emergency basis sent the providers’ case back to the 5th Circuit, which announced that it would hear oral argument in the dispute in early December. Not content to wait until then, the providers returned to the Supreme Court on Sept. 23, asking the justices to take up the case on the merits docket without waiting for the 5th Circuit to rule — a procedural maneuver known as a petition for certiorari before judgment. The providers’ petition for review did not expressly ask the justices to decide whether a six-week abortion ban violates the Constitution. Instead, the question presented by the petition echoed the question flagged by Roberts in his dissent from the court’s Sept. 1 decision to allow the law to remain in effect: whether Texas can “insulate” S.B. 8 from review by a federal court by outsourcing the power to enforce the law to the public.

At the same time, a second challenge to S.B. 8 — this one filed by the Biden administration — was speeding toward the Supreme Court. Filed directly against the state of Texas in early September, the federal government argued that S.B. 8’s ban on abortions beginning at six weeks “clearly violates the Constitution,” while the law’s unusual enforcement mechanism is a “transparent effort” to “stymie judicial review.” The government asked U.S. District Judge Robert Pitman to put the law on hold while its challenge was litigated.

In a 113-page ruling on Oct. 6, Pitman agreed to do so. Texas, Pitman explained, purposely drafted S.B. 8 “to preclude review by federal courts that have the obligation to safeguard the very rights the statute likely violates.” But “there can be no question,” Pitman concluded, that S.B. 8 “operates as a ban on pre-viability abortions,” in violation of Roe and Casey.

Texas appealed Pitman’s order to the 5th Circuit, which on Oct. 8 agreed to temporarily put the order on hold, thereby reinstating the ban on abortions. Six days later, on Oct. 14, the court of appeals issued a new, one-paragraph order that kept the ban in place and fast-tracked Texas’ appeal.

The court set both S.B. 8 challenges for argument on Nov. 1, just 10 days from when the court decided to hear them, setting up the most expedited schedule for briefing and oral argument since Bush v. Gore, which was briefed, argued, and decided over just three days in December 2000.

In their briefs on the merits, the Biden administration and the providers characterize S.B. 8 as “unprecedented” and an “imminent threat to the rule of law.” Texas, they argue, enacted a “blatantly unconstitutional” ban on abortions before viability, and it deliberately created a scheme to “thwart judicial review” of that prohibition. In circumstances like these, they stress, “the federal courts must be available to provide relief.”

The Biden administration pushes back against Texas’ suggestion that federal-court review of S.B. 8 is not necessary because a provider can argue that S.B. 8 is unconstitutional as a defense in any lawsuit brought under S.B. 8. One of the purposes of S.B. was to deter abortions, the administration explains, so such suits are likely to be rare, especially when providers face the prospect of paying their own, potentially crushing expenses even if they are ultimately successful.

The administration and the providers also warn the justices that if they leave S.B. 8’s enforcement mechanism in place, other states will follow suit with similar laws — not only on abortion, but on other issues, such as voting rights or campaign finance. States will be able to circumvent any decision with which they disagree, the challengers predict, simply by passing a law that prohibits the exercise of a constitutional right, barring state officials from enforcing the law, and instead outsourcing the enforcement of the law to the public.

Texas counters that the providers’ lawsuit and the Biden administration’s case suffer from the same problem: Federal courts can’t block S.B. 8 itself. Instead, they can only instruct individuals to block the enforcement of the law, but none of the state officials and judges whom the challengers have sued play any role in enforcing the law — and, indeed, no one does.

More broadly, Texas adds, the providers and the federal government are simply wrong that they must be allowed to challenge S.B. 8 now in federal court. Although the “Constitution does not guarantee pre-enforcement review of state (or federal) laws in federal court,” judicial review is still available in the state courts – which is how “countless cases have been reviewed since the Founding” of the United States, the state maintains. And the lack of pre-enforcement review in federal courts is a decision made by Congress, Texas stresses, which has given the attorney general the power to enforce some rights but has not authorized him to bring a lawsuit to enforce abortion rights.