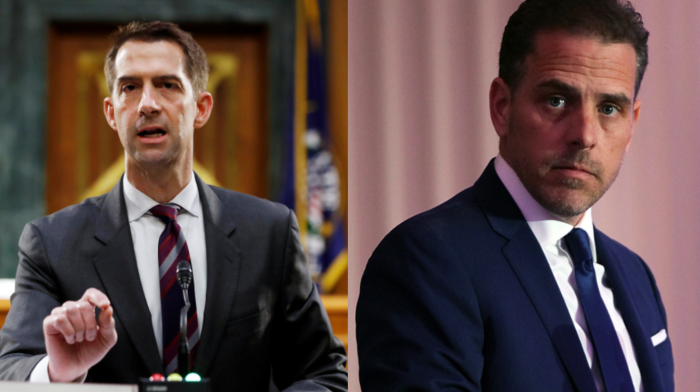 Republican Senator Tom Cotton, believed to have presidential aspirations in 2024, has called for a special counsel to investigate Hunter Biden’s business dealings, including his links to China.

This week, it was revealed that Hunter Biden is under investigation for “tax dealings,” and that the investigation began in 2018.

Hunter Biden revealed Wednesday that he is currently subject to an investigation by federal prosecutors in Delaware for his tax dealings.

In a statement, he said he was taking the matter “very seriously,” but is “confident that a professional and objective review of these matters will demonstrate that I handled my affairs legally and appropriately, including with the benefit of professional tax advisors.”

According to CBS, federal sources began investigating Hunter Biden in 2018, but that the “investigation went quiet during election season due to DOJ policy around ‘overt’ investigative action that could impact [the presidential] election.”

Two sources familiar with the investigation tell CBS that the tax investigation of Hunter Biden began in 2018 report @ClareHymes22 @AndyTriay. The investigation went quiet during election season due to DOJ policy around “overt” investigative action that could impact election. https://t.co/BRWQ48SHOs

Appearing on Fox News, Senator Cotton argued that the tax fraud investigation into Hunter Biden in Delaware is simply the “least damaging part of the investigation.”

“If Joe Biden becomes president, then all those prosecutors are in line to be fired next month. If there were ever circumstances that create a conflict of interest and call for a special counsel, that’s here,” he continued.

A report from the Senate Homeland Security and Governmental Affairs committee revealed that some of Hunter Biden’s business dealings with Chinese nationals have been flagged for potential “financial criminal activity.”

“Hunter Biden had business associations with Ye Jianming, Gongwen Dong and other Chinese nationals linked to the Communist government and the People’s Liberation Army,” the report details. “Those associations resulted in millions of dollars in cash flow.”

Cotton, who serves on the Senate Intelligence Committee, said the allegations were “very serious,” especially with the prospect of Hunter Biden’s father becoming president.

“The Biden family has been trading on Joe Biden’s public office for 50 years,” Cotton argued.

“Do we really think that will change if Joe Biden becomes president, the highest office in the land? If they did it when he was vice president and he was senator, of course it’s going to happen when he has even more power.”

RELATED: Report: Media’s Biased Coverage of the Election May Have Handed the Presidency to Biden