A small but influential group of Republicans has begun urging President Donald Trump to concede last week’s election, with a growing number urging him to at least allow Joe Biden access to daily intelligence briefings.

Mr Trump has refused to accept his loss and has barred federal agencies from co-operating with the president-elect’s transition team, which has included preventing Mr Biden from being briefed by US spy agencies — a tradition for incoming presidents that dates back decades.

Republican leaders in Congress have argued that the winner is only declared once each state certifies its results, a position that avoids antagonising the conservative base of Trump supporters. But a growing number have started to urge Mr Trump to accept the inevitable.

In an interview with CNN on Thursday, Mike DeWine, the governor of Ohio, acknowledged that Mr Biden had won the presidential election. “Joe Biden is the president-elect,” said Mr DeWine, a Republican who endorsed Mr Trump for re-election.

Mr Trump and other White House officials have continued to make baseless claims of voter fraud, while Republican lawyers have filed lawsuits intended to challenge the results in some of the crucial swing states that helped Mr Biden secure victory, such as Pennsylvania and Michigan.

Although Mr Trump has not made any comments in public since Mr Biden was declared the victor on Saturday, he repeated wild claims of fraud on Twitter on Thursday, which the social network labelled “disputed”.

The federal government agency responsible for overseeing election security issued a statement late on Thursday, cosigned by several state and local government election groups, testifying to the soundness of the November 3 vote and warning against claims it was compromised.

“While we know there are many unfounded claims and opportunities for misinformation about the process of our elections, we can assure you we have the utmost confidence in the security and integrity of our elections, and you should too,” the agency heads said.

Karl Rove, a former top campaign strategist to George W Bush, said there was “no evidence” of the kind of fraud that could overturn the result of the election, and added that the margins in states such as Pennsylvania and Michigan meant that any recount would not alter the outcome of the race.

“Once his days in court are over, the president should do his part to unite the country by leading a peaceful transition and letting grievances go,” Mr Rove wrote in The Wall Street Journal on Wednesday.

Republican allies of Mr Trump have begun to focus on the intelligence briefings, arguing that even if the president disputes the result, ensuring Mr Biden is fully informed on national security matters should be uncontroversial.

Republican James Lankford, an Oklahoma senator who sits on the oversight committee, vowed to intervene if Mr Trump does not allow Mr Biden to get intelligence updates. “There is no loss from him getting the briefings and to be able to do that,” Mr Lankford told a radio station in Oklahoma. 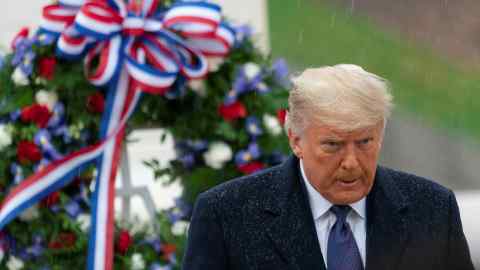 Mitch McConnell, the Republican Senate majority leader, has said Mr Trump was entitled to pursue legal challenges, which has sparked concern among Democrats. But the Kentucky senator, who is known for his precise use of language, has not endorsed the unsubstantiated claims of voter fraud.

Corey Stapleton, the secretary of state of Montana, one of the most conservative states, said Mr Trump had accomplished “incredible things” in office but that it was time for him to move on gracefully.

Mr Trump still retains the support of his biggest allies in conservative media, including Sean Hannity, Tucker Carlson and Laura Ingraham — three Fox News anchors who have been staunch backers of the president. But Geraldo Rivera, Fox News correspondent at large, joined the chorus of allies pleading with Mr Trump to accept Mr Biden as the legitimate winner.

He was joined by Hugh Hewitt, a popular conservative radio show host and strong Trump supporter, who wrote in The Washington Post: “Trump must look forward. So must his party.”

In a tough rebuke, the Las Vegas Review-Journal, a newspaper owned by Sheldon Adelson, the casino magnate who has been a leading Republican donor and a booster of the president, called on him to stop delaying the inevitable result.

“The president does a disservice to his more rabid supporters by insisting that he would have won the Nov 3 election absent voter fraud,” the newspaper wrote in an editorial.

“There is no evidence, however, that fraud cost Mr Trump the election, no matter how much the president tweets the opposite and his supporters wish it so,” it added.