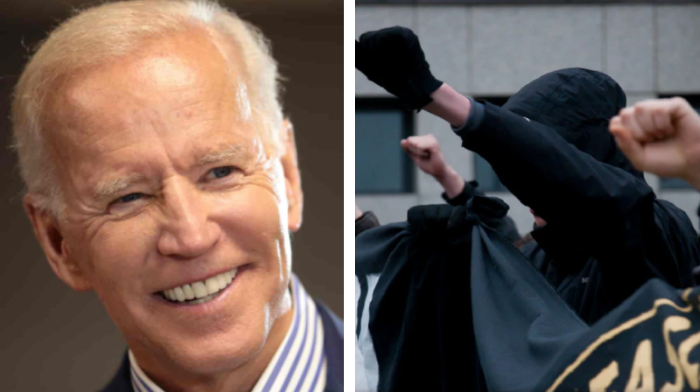 On Monday, former Vice President Joe Biden took a dozen questions from reporters while holding an “Office of the President-elect” briefing on the economy.

But not a single reporter asked Biden about the violent attacks against Trump supporters at the “Million MAGA March” in Washington, DC over the weekend by far-left thugs.

During the “Million MAGA March” in Washington, D.C. on Saturday, there were many incidents of Antifa and other far-left “activists” harassing and physically attacking peaceful marchers and rally-goers.

If right-wing street terrorists had attacked Biden supporters, it is all President Trump would hear about.

But Biden did not receive a single question on it.

Biden was asked, “What do you see as the biggest threat to your transition right now, given President Trump’s unprecedented attempt to obstruct and delay a smooth transfer of power?”

And, “What is your message to Republicans who are backing up the President’s refusal to concede?”

And also, “Will you get vaccinated?”

Antifa/BLM continues to attack Trump supporters who are eating outside with fireworks in Washington, DC. pic.twitter.com/8k32VN4Sm7

You can hear see and hear the female Trump Supporter cry in fear pic.twitter.com/No1QDp4KLd

“Not one was about the violence against Trump supporters in the streets of DC,” he added. “No one asked him to condemn it.”

He continued, “If Biden supporters were attacked, the only questions to Trump would be about violence, demanding that he condemn it.”

Biden took about 12 questions from reporters today. Not one was about the violence against Trump supporters in the streets of DC. No one asked him to condemn it. If Biden supporters were attacked, the only questions to Trump would be about violence, demanding that he condemn it.

Fleischer wasn’t the only one who noticed what was going on.

“You’ve been watching to what amounts to a bit of a love fest here between the media,” Hemmer said.

If This Behavior Is Enabled, It Will Increase

Expect Antifa and other violent far-left groups to get stronger in coming years as the “woke” mob continues to define the Democratic Party.

And expect Joe Biden and Kamala Harris to get zero questions about or to be blamed for it, as has been done to President Trump concerning far-right extremists he has nothing to do with.

Joe Biden promised a return to “normalcy” and he will get it – the press bending over backward to protect the left and malign the right, truth be damned.