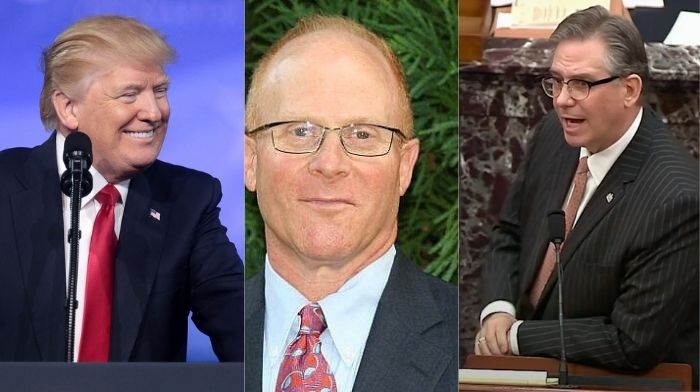 As Donald Trump’s impeachment legal team began arguments in the second day of the trial, The Daily Mail reported that Trump lawyer Michael Van der Veen had once called him “a fu**ing crook.”

According to the report, Van der Veen’s comments happened while working on a 2019 case in which a student was accused of hacking IRS databases in order to obtain Donald Trump’s tax records.

Trump’s legal team says Democrats are engaging in “political theater” and argues the impeachment trial is unconstitutional since he’s no longer President https://t.co/fB5kHULC9J

Van der Veen’s former client stated that he was not sure if the ‘crook’ comments were an attempt to make him more comfortable or if they were the genuine beliefs of Van der Veen.

The client tells my colleague @anna_orso today he stands by his recollection.

Even more curious, a Washington Post report states that Van der Veen sued Trump last year over Trump making claims that mail-in voting was “ripe with fraud” despite having “no evidence to support these claims.”

Conservative commentators have often wondered aloud about some of Trump’s hires. This one will no doubt draw many questions.

RELATED: CBO Warns $15 Minimum Wage Will Kill 1.4 Million Jobs, House Dems Are All For It

Trump Legal Team Off To A Shaky Start?

In a report from Politico, sources close to Trump say that the former president was not happy with the legal team’s performance.

Widely criticized for his performance was Bruce Castor.

Castor gave a disjointed 45-minute opening statement that confused many as it seemed that Castor often struggled to find a point.

Among the bewildering strategies was Castor stating that Donald Trump lost the election fairly.

This was a departure from reports that neither Castor or Schoen had planned to bring up any mention of a stolen election, but planned on arguing constitutionality of an impeachment trail against a president who is out of office.

Harvard Law Professor Alan Dershowitz also did not have good things to say about the team’s first day, saying they did not do well.

Of Castor, Dershowitz said, “I have no idea what he is doing.”

‘There is no argument – I have no idea what he is doing,’ @AlanDersh on Trump’s defense lawyer Bruce Castor ‘talking nice’ to U.S. Senators – via Newsmax TV’s ‘American Agenda.’ https://t.co/VlT7z8drtO pic.twitter.com/7P7uVk5X19

According to multiple outlets, sources close to Trump claim that, as defense attorneys meandered through opening statements, the President appeared to be getting frustrated as they gave timid responses to the prosecution.

The source also said that Trump saw the team’s performance as a missed opportunity, and was also bothered by the public criticism of his attorneys.

This was not an auspicious start for the defense today. The House was more polished and effective. The defense will need to tighten the narrative and focus the points going forward.

The Politico report also stated that Castor had indeed admitted to changing plans based on how well the House Managers arguments were received.

An aide to former President Trump reportedly stated, “This is about lowering the temperature from the Democrats’ emotionally charged opening argument before dropping the hammer on the unconstitutional nature of this impeachment witch hunt.”

RELATED: Trump ‘Not Happy’ With His Legal Team’s First Appearance In Impeachment Trial