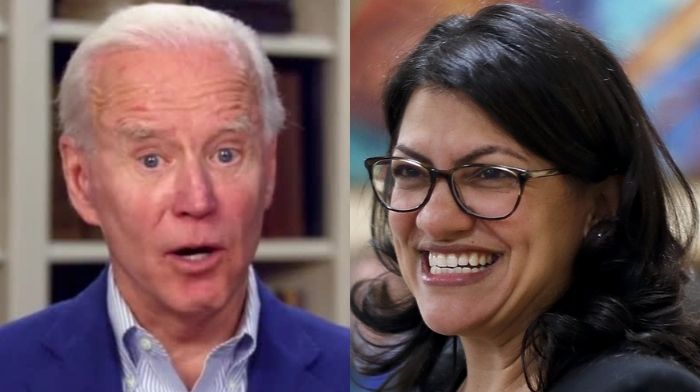 Rep. Rashida Tlaib (D-MI) and the rest of her radically liberal “Squad” are taking a victory lap right now after President Joe Biden took a series of climate executive actions.

In an interview with MSNBC on Wednesday, Tlaib said that she is “pleased” to see that the “principles and the values in the Green New Deal,” which was created by her “Squad,” in Biden’s climate executive orders.

“I think it’s a courageous first step in trying to make sure that our next agenda for the next year, four years is centered on environmental justice issues that are critically important to my district,” she said of Biden’s executive actions.

Tlaib proceeded to take much of the credit for what Biden is doing for herself and her “Squad.”

Tlaib ominously went on to add that the Green New Deal “did push, and it continues to push many of my colleagues, including the president, towards, again, a much more aggressive and I think timely approach to addressing the fact that we don’t have clean water and clean air in our country right now.”

Related: AOC And Her ‘Squad’ Celebrate Biden And Harris – We Must Begin ‘Healing Our Planet’

This came after Biden unveiled an environmental plan that was very Green New Deal-like, as it aimed at putting “climate change at the center of our domestic, national security and foreign policy.”

The $1.2 trillion plan is already being slammed for how expensive it is as well as for the American jobs it will cost at a time when Americans need jobs more than ever.

Patrick Morrisey, West Virginia’s Republican attorney general, spoke out to say that Biden’s plan would be “destructive” to the economy as the U.S. struggles to recover from the coronavirus pandemic.

“What we’re seeing in the first week of the Biden administration is that the president is really taking a wrecking ball to many of the states that have oil, gas, coal, manufacturing jobs — that’s gonna have a real detrimental impact, especially as the American economy is coming out of COVID-19, a pandemic,” Morrisey told Fox News.

He added that “Biden is going much further” than Barack Obama ever did.

“I think he’s really kicking the American people when they’re down economically and it’s not a message of unity that he’s been talking about,” Morrisey added.

This piece was written by James Samson on January 28, 2021. It originally appeared in LifeZette and is used by permission.