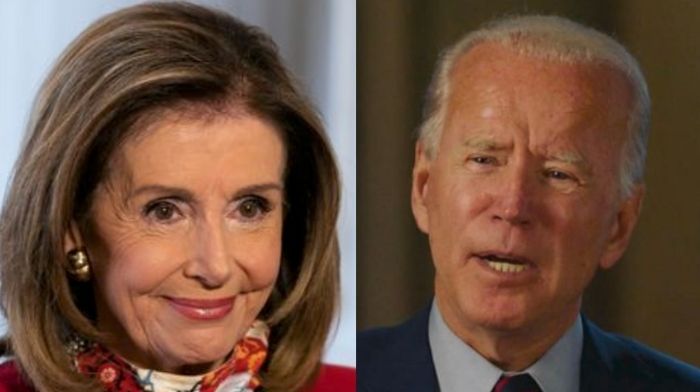 Speaker Nancy Pelosi (D-CA) spoke out on Friday to shrug off the losses that Democrats suffered in the House, saying that Democrats will have great leverage next year with Joe Biden in the White House, which is something she seems to see as a certainty.

Pelosi Says Biden Has A ‘Mandate’

“President-elect Biden has a strong mandate to lead, and he’ll have a strong Democratic House with him,” Pelosi said as she predicted a Biden win, according to The Hill.

Senator Mitch McConnell (R-KY) indicated on Friday that last month’s employment numbers suggest that Congress should pass a smaller COVID-19 relief package than Donald Trump’s administration had previously backed. Senator Roy Blunt (R-MO) said that the results of the election this week indicate that Pelosi will have to “give some ground” in those talks.

“Sure she does,” Blunt said after he was asked if Pelosi will have to drop some of her demands in the emergency relief package. “And the vast majority of her members also think she has to give some ground here. The liberal agenda was rejected by voters.

“There was no mandate in this election,” he continued.

RELATED: Could the ‘Squad’ Replace Nancy Pelosi As Speaker After The GOP Flips Several House Seats?

Pelosi, however, rejected the notion that the results of the election mean that Democrats should be looking at a smaller package.

“That isn’t anything that we should even be looking at,” Pelosi said of a potential slimmer bill. “I think Joe Biden has a big mandate — a bigger mandate than John F. Kennedy.”

However, Pelosi did admit that the Democrats’ losses in the House did come as a disappointment, adding that Democrats in Trump districts simply faced “almost insurmountable [odds] with Trump on the ballot.” She went on to dismiss claims that infighting between progressives and moderates in the Democratic Party could hinder their legislative priorities in the future.

“I would say we have a healthy difference in opinion in our caucus,” Pelosi said, “but not in any way to be problematic in how we legislate.”

READ NEXT: Tears, Rage Toward Pelosi And The ‘Squad’ As House Democrats Conference Call Is Leaked Following Election Losses

This piece was written by James Samson on November 6, 2020. It originally appeared in LifeZette and is used by permission.