The talks were currently not active, said one of the people briefed. Microsoft has been pursuing an acquisition strategy aimed at amassing a portfolio of active online communities that could run on top of its cloud computing platform.

Pinterest, whose market value has increased more than 600 per cent during the coronavirus pandemic, has signalled in the past that it desired to remain an independent company.

Its soaring stock price would present a hurdle to Microsoft, whose shares have risen nearly 80 per cent from a pandemic low, though Pinterest’s market value is only about 3 per cent of Microsoft’s $1.83tn.

Pinterest shares were up around 7 per cent in pre-market trade on Thursday morning.

A purchase of Pinterest, which would have amounted to the largest deal ever for Microsoft, would also have tested the Biden administration’s appetite for allowing powerful technology companies to strike deals.

However, Microsoft, which mainly sells to businesses and governments rather than consumers, has avoided most of the political backlash that has made it more difficult for Facebook and Google to make big acquisitions.

Microsoft first revealed its interest in acquiring a prominent social media company last year when it tried to buy the US operations of TikTok, a popular Chinese video app that was under pressure to divest its US business over the Trump administration’s national security concerns. The bid for TikTok failed after rival Oracle gatecrashed the talks.

Microsoft has made several acquisitions in recent years. Besides buying professional networking site LinkedIn for $26bn in 2016, it has acquired GitHub, a code repository that doubles as a network for software developers, and Minecraft, an online game that last year passed 131m users. Last year, it acquired private gaming company ZeniMax for $7.5bn.

Microsoft has looked to online communities as a way to bring large-scale applications to its Azure cloud platform. Pinterest, which last week said its monthly users had grown to 459m, relies on Amazon Web Services as its infrastructure provider.

Ownership of sites with large numbers of active users, many of them posting frequently, has also provided valuable data for Microsoft’s other businesses. Data from LinkedIn, for instance, are used to “customise” other Microsoft apps and services, the network said. 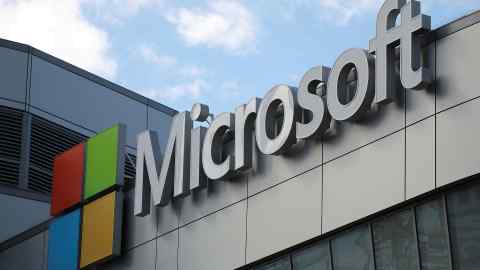 A social media site where millions of users post images of things they are interested in or might want to buy on “boards” could turn into an important source of data for customers of Microsoft’s marketing services, while also acting as raw material for training the company’s AI systems.

Pinterest, which made its stock market debut in April 2019, has been a beneficiary of a pandemic-related surge in usage as people have stayed at home during lockdowns and business has shifted away from bricks-and-mortar stores to selling online.

Last week, it posted a 76 per cent rise in quarterly revenues, sending its shares up more than 10 per cent. It has been broadening its advertiser base, introducing ad formats and ecommerce opportunities that bring it in line with similar developments at rivals Facebook and TikTok.

Because of the nature of its content, the social network has largely avoided the scrutiny faced by other platforms over moderation failures.