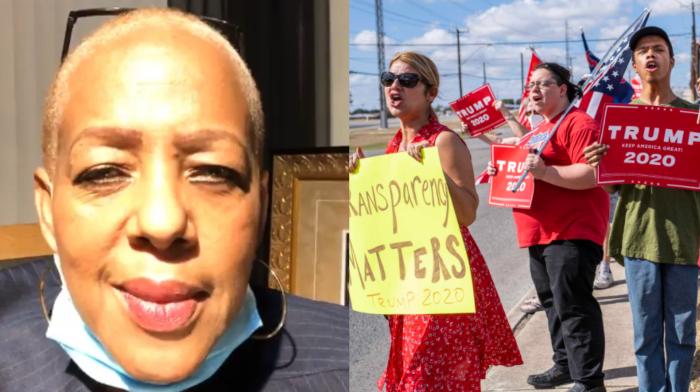 Johnson, who was elected as a Michigan State Representative in 2018, issued a “warning” to anyone who identifies as a “Trumper.”

The video was shocking enough to already cause professional repercussions for the Democrat.

“Be careful, walk lightly, we ain’t playing with you. Enough of the shenanigans. Enough is enough,” Johnson said.

“And for those of you who are soldiers, you know how to do it. Do it right, be in order, make them pay.”

In the video, streamed live to Johnson’s Facebook page, she said that she wished she could be talking to her supporters “in a private room,” suggesting she may have gone even further in her rhetoric if she wasn’t in public.

Michigan Democratic State Rep. Cynthia Johnson threatened @realDonaldTrump supporters in a Facebook live video Tuesday, saying it is a warning message to those who support the president.

As a result of the threats made, Johnson has been removed from committee assignments.

“Threats to either Democrats or Republicans are unacceptable and un-American. They’re even more unbecoming of an elected official,” said House Speaker Lee Chatfield and Speaker-elect Jason Wentworth.

“We are looking into further disciplinary action as the proper authorities conduct their own investigations,” the joint statement continued.

Michigan State Rep. Cynthia Johnson is stripped of her assignments and is under investigation for her threats against Trump supporters posted on social media on Tuesday night. pic.twitter.com/3MpMlul2wZ

“You’re Allowing People To Come In Here And Lie”

Johnson hit the national spotlight at the start of the month, when President Trump’s legal team presented what they allege was evidence of election fraud, backed up by witnesses, at a hearing in Michigan.

The State Representative interrupted proceedings multiple times, demanding witnesses be put under oath, and claiming that State Rep. Matt Hall, the Committee Chair, was “allowing people to come in here and lie.”

Rudy Giuliani, President Trump’s lawyer, told the panel at the time that every witness they were presenting had “sworn an affidavit as to all these facts.”

Hima Kolanagireddy, the witness who Johnson had interrupted, then assured her that she was absolutely willing to testify under oath if she wanted her to, and her story would not change.

“If it is a lie it may change because a liar has to have a lot of memory power,” Kolanagireddy argued. “But if it is the truth, you can ask me in the middle of the night and it will still be the same.”

Johnson Accused Of Attempting To Intimidate A Witness

Later on in the hearing, Johnson was even accused of attempting to ‘dox’ a witness by demanding her maiden name, rather than challenging her testimony itself.

“Doxxing” is defined by Dictionary.com as a “search for and publish private or identifying information about (a particular individual) on the internet, typically with malicious intent.”

“This is totally unacceptable that a sitting Michigan State Representative would try to intimidate and publicly dox a witness on national television simply because she doesn’t like the witness’s testimony,” Jenna Ellis, a member of Trump’s legal team tweeted. “Sanctions?”

This is totally unacceptable that a sitting Michigan State Representative would try to intimidate and publicly dox a witness on national television simply because she doesn’t like the witness’s testimony.

Johnson later claimed she was subject to violent threats herself, and shared the threatening voicemail messages with the press.

Some of the vile messages included threats of lynching.